Season servers are a new addition to BDO which arrived on the 17th June 2020.

Season servers are designed for new and returning players to help them get started in BDO. There are various rewards you can collect by participating, which will give you a great start in terms of gear. The daily quests also help to introduce you to certain parts of the game without throwing you straight into the deep end. If you’re a veteran player then you can still benefit from playing on the season servers and it can be refreshing to play on them, but the rewards are not too desirable that you would feel forced to participate if you don’t want to.

Season 1 will last until August 26th 2020. You must create a special Season Character to have access to the Season server (only 1 character can be created per season). At the end of the season, your character will become a regular character.

The Season servers themselves are not actually season servers at all. They are special channels that are added and only Season characters can connect to them.  The channels have a special icon on them so you can tell them apart from regular channels 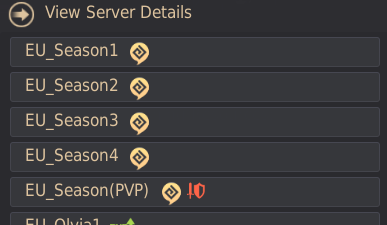 On these channels there is a Combat EXP +100% and a Skill EXP +20% buff running at all times, but PVP is not allowed (you cannot flag up and guild wars do not work) unless you join the specific PVP channel. The Central Market and Storage is not seperate to other channels. You can use your pets, fairy, tent and maids that are already on your account as well. All horses (except T9 horses) and other mounts are available in your stables. It is also worth noting that Season Characters can connect to regular channels as well, but only Season Characters can connect to the Season Channels.

Season specific gear (Tuvala gear or Naru gear), Asula accessoires and main store quest gear is the only gear that can be equipped by a season character. These items have special icons on them.

Naru gear was added on the 15/07/2020. It is easier to obtain and enhance than the Tuvala gear and is also given out as a reward when completing the main story quests in Serendia and Calpheon.

You can obtain Naru gear as a drop when fighting monsters in Serendia, Calpheon and Mediah.

You can also exchange the new Beginner Black Stones for Naru gear:

You can obtain Beginner Blacks Stones from the main story quest, or by heating regular black stones to turn them into Beginner Black Stones.
They are also used for enhancing Naru gear.

To enhance Naru gear, you will need the new blackstones called Beginner Black Stone. Information about how to obtain them is shown above.

Naru gear is much easier to enhance than Tuvala gear. If you fail when enhancing they only reduce the maximum durability by -2. They also require less cron stones to safe enhance (eg. 3 cron stones needed for TET > PEN attempts).

Once you reach PEN Naru armor/weapons and have completed the Mediah questline, you can take this gear to Fughar and he will exchange them into PRI Tuvala gear.

It is also worth noting that once you achieve level 60, you will be rewarded with a PEN Tuvala Ring and then at 61, a PEN Tuvala Earring. These can be obtained in your Challenges tab. 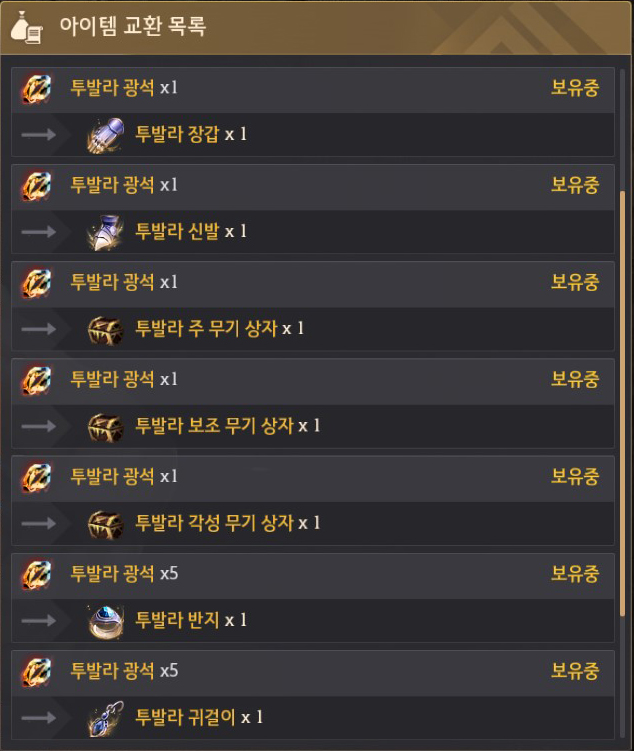 To enhance Tuvala gear you will need new blackstones called Time-filled Black Stone. In the Korean patch notes it says these drop from monsters in Valencia, Kamasylvia, Dreighan and Sycraia Underwater Ruins, but players have found they can drop in all regions.
When killing monsters in Valencia, Kamasylvia or Dreighan, you can also drop an item called

These can be exchanged for: 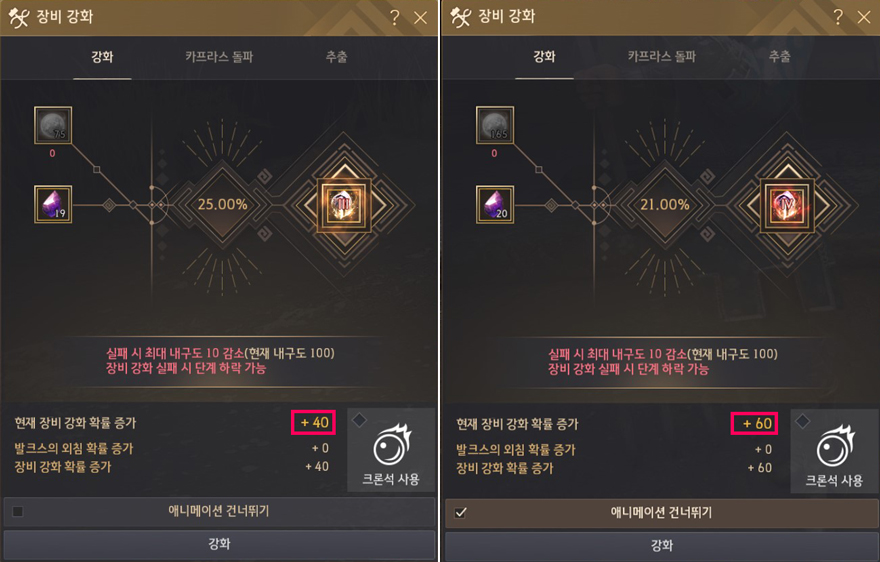 The new time-filled blackstones can also be exchanged at a new Seasonal NPC for items such as Advice of Valks (up to +40), or Valk’s Cry.

Refined Magical Black Stone can be used to force enhance the gear from +15 to TRI but reduces the items max durability by 50 each time.

You can repair the max durability again by going to the blacksmith and using an unenhanced weapon/armor of the same type.

All Tuvala ore Time-filled Black stones and Refined Magical black stones will deleted once the season ends and cannot be used in the next season. 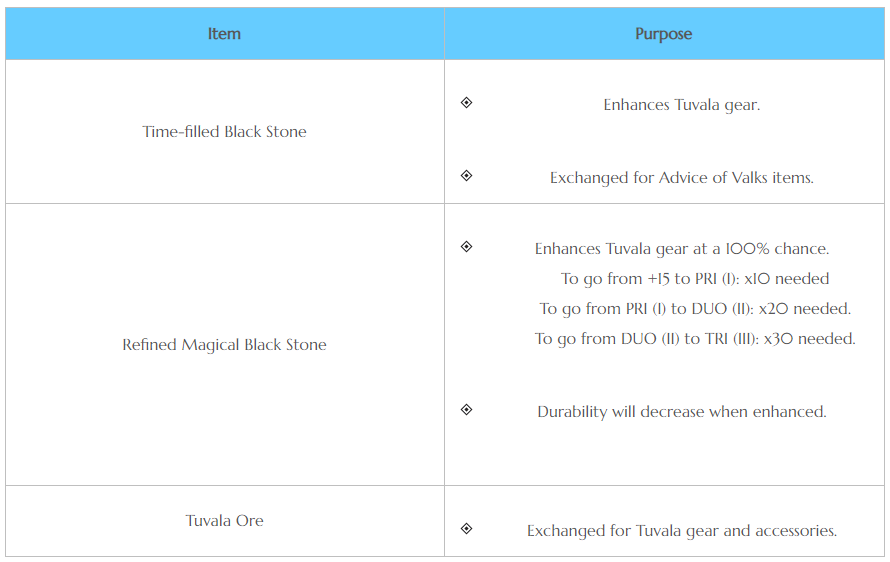 Tuvala Enhancing Rates info can be found below:
Check our failstacking guide for our recommended optimal failstacks

A new Seasonal NPC (Fughar) will give daily quests that will give items to help you enhance your seasonal gear. Fughar is located in all large towns next to the stable keeper.
For the first 16 days you have simple quests that only require you to talk to Fughar to complete, afterwards you will need to do various tasks for him each day.
You can complete quests on a different character to make it a little faster! You can also complete the 40 quests after season ends and receive your Capotia reward, as long as you start the quests before the season ends.

After completing the first 40 daily quests, you will unlock the special end of season reward (this season is a PEN capotia earring or PEN capotia ring). You will also receive more daily quests that will reward you with items such as Cron stones, Hard and Sharp Shards, item loot scrolls and Valk’s cry.

In order to obtain the PEN Capotia Accessory, you need to speak to Fughar and accept the quest “[Season] Fughar’s Gift”. This quest will be available after August 5th whether you have graduated or not. It is only available though if you have completed all of the 40 dailies from Fughar. He will then give you the option to choose between a PEN Capotia Earring or a PEN Capotia Ring. 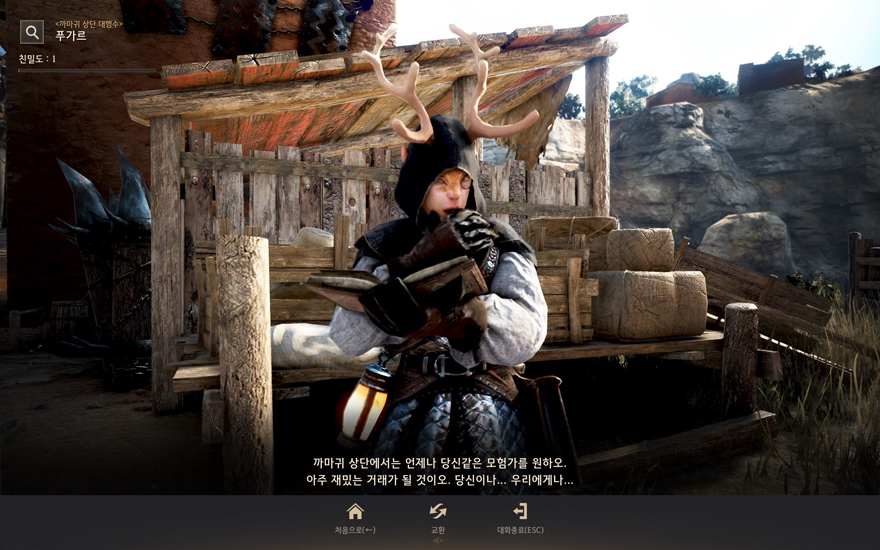 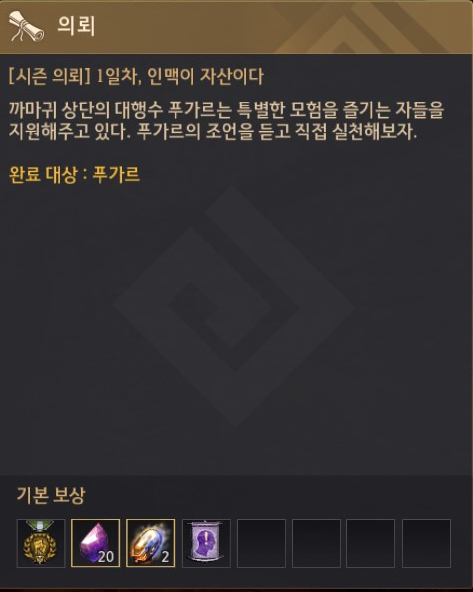 Each time you complete one of the main questlines (Balenos, Serendia, Calpheon, Media) you will also recieve an award which can be used to gain a large amount of skill points. You get a certain amount of skill points EXP so you can use these at any level and it is not worth saving them for after you have gone over the skill point softcap.

If you get stuck or confused at any point, you can open your main quest log [O] then go to the “main” tab to view your progress.

There are weekly quests you can complete which will give you a lot of of the time-filled blackstones (you can choose to get Tuvala Ore instead but time-filled blackstones are used up much quicker so I recommend getting those). You need to be at least level 20 to get these quests but we recommend you are over level 56 because they involve killing monsters in certain zones. YOu can find the weekly quests by pressing [O] to open your quest tab, then going to Reccuring and they are under the (Season) section. There may be platoon parties you can join to make the killing quests go quicker!
Make sure you have switched on all quests or you will not receive the weekly quest. Do this by pressing [O] then clicking the icons at the left bottom so that they are yellow like in the image below.

A special seasonal battle pass has been added to the season servers. You can open the battle pass by clicking the icon in the top right next to your mini-map. You must do each part of the battle pass in order to unlock the next reward, but you can complete them in advance and your progress will be saved.

Complete various achievements to unlock rewards in your battle pass. All players have access to the free version and can buy a Seasonal Battle Pass in the pearl store to obtain the premium rewards. An example of rewards include: inventory slots, advice of valks, artisan memories, pets, elion tears, loot scrolls. Achievement tasks include completing parts of the main story quest, killing world bosses or killing a small amount of certain mobs.

At level 10 you will also be given a leveling aid box. Do NOT delete this box because you will not get it back again. You can open this at certain levels to receive awards and a temporary EXP buff. 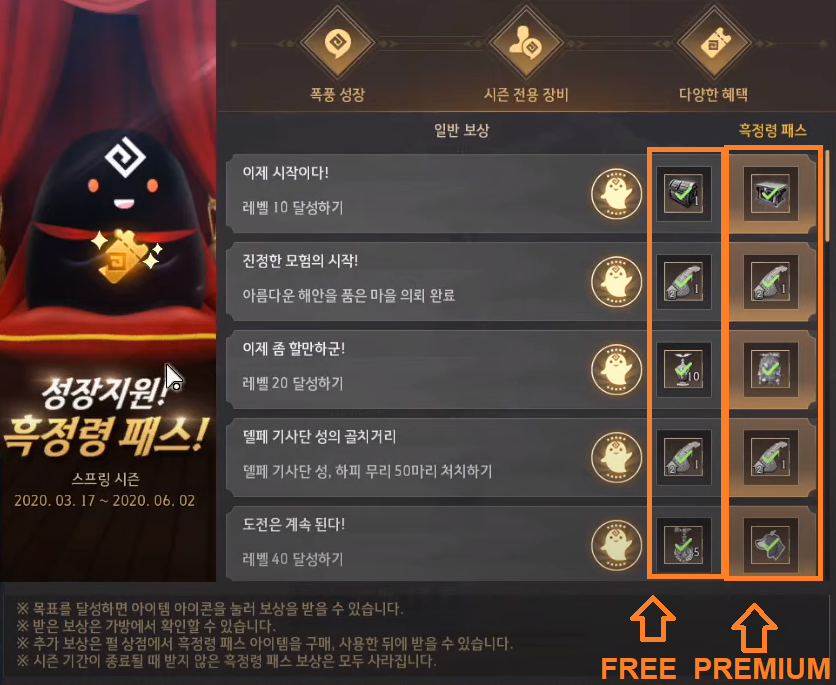 At the end of the season you will have various rewards. The most note worthy of the rewards is the [Season] Boss Gear Exchange Coupon, which allows you to convert one Tuvala piece to boss gear or yellow accessories. More infomation on this can be found in the section below.

Full details can be found here:

How to Graduate (Early Graduation)

The current season will end on August 26th. However, players have the option to graduate early between August 5th (after maintenance) until August 26th (after maintenance). You cannot create a new season character for the same season if you have graduated early. Graduating early allows you to receive all of the end of season rewards and turn your charcter into a regular character. All characters must graduate between August 26th and September 2nd if they have not chosen to graduate early.

You will get Conversion stones which are used to convert your Tuvala gear into gear that can be used by regular characters.

You must use these Conversion Stones on each piece of Tuvala gear you would like to keep. There is 1 conversion stone for each Weapon/Armor, 1 for necklace and belt, and then 2 for your rings and earrings, meaning you can convert one full set of gear.

To convert the gear, speak to your Black Spirit and choose the “Upgrade Gear” option. You can then select the gear and conversion stones to convert each piece individually. Make sure to select the correct piece of gear! If you do select the wrong piece of gear, send a ticket and they will help you get it sorted out, but will only do this once per account.

Unconverted Tuvala will be deleted during the maintenance on September 2, 2020 (the start date of the next Season). Make sure to convert your Tuvala Gear beforehand!

The converted Tuvala gear will be changed to Family bound and can be moved to and equipped by regular characters.

How to get the PEN Capotia Accessory

In order to obtain the PEN Capotia Accessory, you need to speak to Fughar and accept the quest “[Season] Fughar’s Gift”. This quest will be available after August 5th whether you have graduated or not. It is only available though if you have completed all of the 40 dailies from Fughar.

Once you’ve accepted and completed the quest “[Season] Fughar’s Gift” you will have an item called “Season Exchange Coupon”. Speak to Fughar again and click the “Season Special Gift” option. This will open the window shown below and here you can choose between the PEN Capotia Ring, or the PEN Capotia Earring. Click Exchange to confirm. 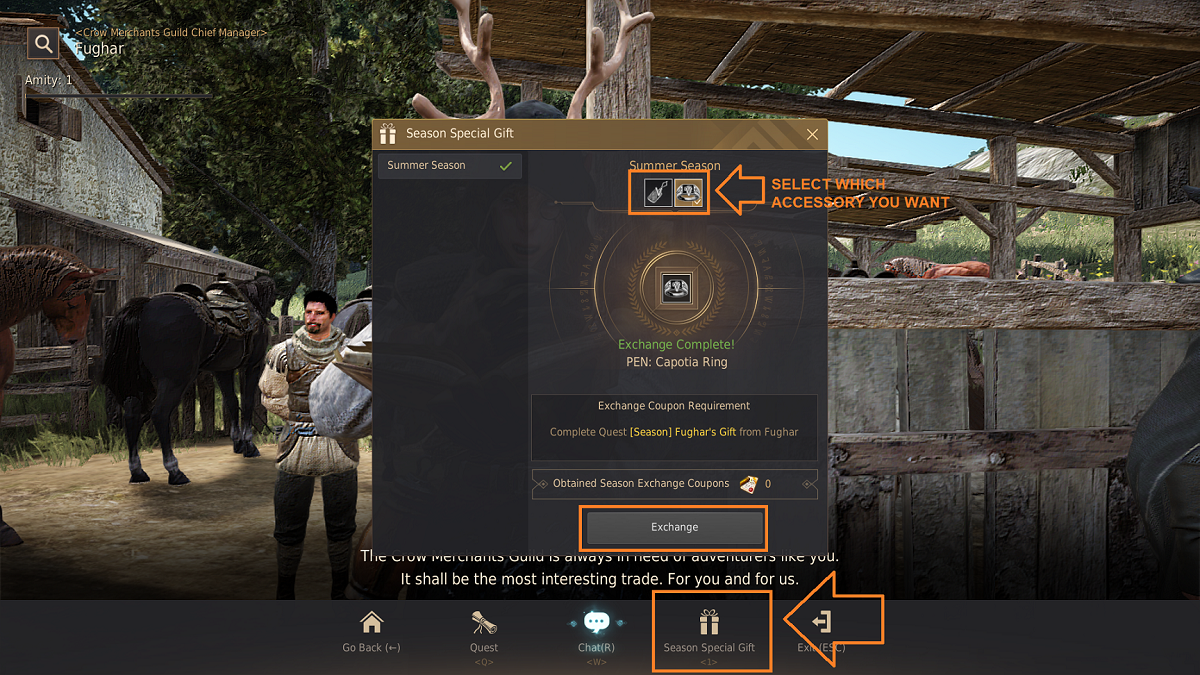 When the season ends, one Tuvala item (armor or weapons) can be converted into boss gear using the [Season] Boss Gear Exchange Coupon.

The gear also becomes family bound and you can still enhance the gear afterwards, put caphras levels into it, etc. You just can’t sell it on the market!

To exchange Tuvala gear for a boss piece, you must first make sure you have graduated and converted the tuvala gear to regular gear using the Conversion Stones. You must then go to Fughar and accept the quest for the gear piece you would like to exchange:

After accepting the correct quest, go to Tranan Underfoe (the blacksmith in Velia) and he will exchange your gear for you.

Other advice for New Players

Tips to improve your silver per hour when grinding
Read more

Thank you to everyone who has supported us. We would also like to give a huge thank you to Ashelin for previously hosting the site, our guide contributors, and Luis for everything he has done .