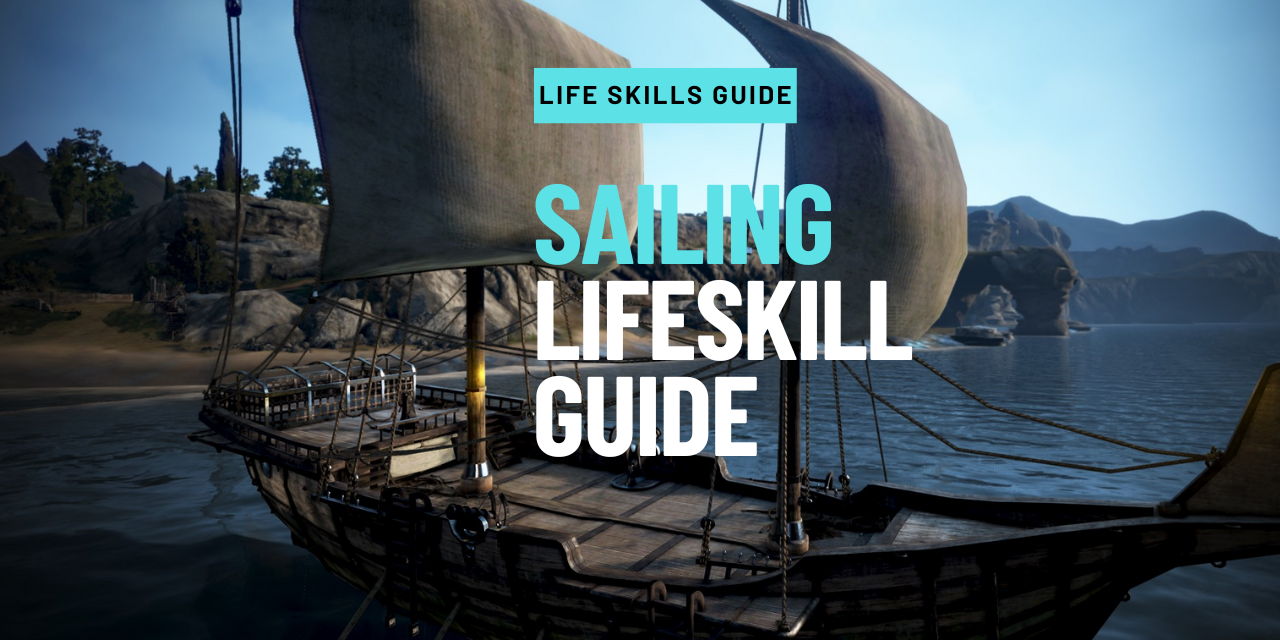 In this guide is designed for players looking to further invest in the Sailing lifeskill or are going for the Carrack. We will be covering sailing gear to use, sailing mastery, sea monster hunting, and a walkthrough of the sailing dailes (required to build a Carrack ship). If you are completely new to sailing in Black Desert then I recommend checking the guides below first:

If you haven’t already, I also highly recommend joining the Sailing Discord for lots of great resources and to find groups for the sailing dailies or crocodile hunting.

The Sailing Life Skill allows you to use more ship skills the higher your level is and this can increase the efficiency of other life skills, such as bartering, and trading to Port Ratt, or can make it easier and faster to kill sea monsters.

You can easily achieve skilled 1 in sailing and unlock the Breezy Sail skill, by completing the questline [The Great Expedition] Oquilla’s Eye. You can get this quest from your Black Spirit under the Suggestions tab and it can be done on all characters.

If you have 1500 points for example, you will have a 15% increase to all your ship’s stats (acceleration, speed, turn, break).

Increasing your Sailing Mastery can be useful if you need to reach high enough accel and break stat for the Ebenruth’s Nol on your Carrack. Otherwise sailing mastery is simply a quality of life improvement and not something I would heavily invest in. To reach high sailing mastery you would need to spend a lot of silver on the gear required, however if you have accessories from other life skills then you should use them for the ship stat increases.

Sea Monsters spawn in certain areas in the Margoria ocean and the Young/Hungry versions can also be found in the Epheria and Velia seas. Young and Hungry sea monsters are easier to kill but give less loot than the harder versions. You can check our Interactive Map for all sea monster locations. In addition to the sea monsters above, there are also Saltwater Crocodiles which spawn east of Port Ratt. These sea monsters are much harder and I recommend finding a person to group with if possible. Up to two players can get loot from the Crocodiles. You many need to repair quite often, but is possible to solo them with +10 green Carrack gear.

The Saltwater Crocodiles drop items such as:

When grinding Saltwater Crocodiles for blue gear materials I recommend using as many drop rate buffs as possible. You can use Kama Blessing, Advanced Loot scroll and your Agris Fever to get as many of the Scales as possilbe for your time spent. Agris Fever works on all Sea monsters.

Click to enlarge the image below. Credit goes to Geniewiz#0001 from the Sailing Discord for making this Crocodile spawn map. You can also check out his Google Sheet for tracking crocodile loot.

You can leave an alt at Port Epheria to pick up the quest at the start and then go back on your sailing character at the end to hand it in. There is only one quest at Epheria and it only gives sailing EXP and Origin of Wind x1 so you can skip this quest if you want to.

The quest can be picked up from Dius and there are three different quests from him. The quest you get is RNG and changes each day but each gives the same reward.


Next, pick up all 5 quests in Velia. There is a quest you can pick up from Croix, who is the Wharf Manager located on the Velia Docks. Just like with Dius, there are three different quests from him. The quest you get is RNG and changes each day but each gives the same reward. Now head inside the Inn on the Velia Docks and find Miya and Proix. Miya has 3 quests you can choose from and then another you can pick up. I recommend choosing the Baremi Island quest if possible so you can complete it on the way to Oquilla’s Eye, since the other two are more out of the way.

Next speak to Proix and pick up all the quests from him. Now that you’ve picked up all the quests from Velia, head towards Illiya Island. Make a stop at Arakil Island to kill the Cox Pirates there needed for the quest, then kill three of the Hungry Ocean Stalkers that spawns south of Illiya. Afterwards, head north towards Oquilla’s Eye. You can stop at Weita Island for more Cox Pirates and Baremi Island to complete the barter quest whilst you are on the way. South of Oquilla’s Eye are Hungry Hekaru sea monsters. Kill 3 of those to complete the 3:3 quest from Proix. After arriving at Oquilla’s Eye, pick up the quests around the island.

The first quest to pick up is from Ravikel, the wharf manager. The quest is called “[Daily] Ravikel’s Test”. After picking up the quest, turn to your left and there is a Soldier next to the Guild Manager NPC who has 3 quests for you as well. Once you’ve collected the 4 quests on the shore, head to the north side of the island. There is an NPC called Bave Ricksa here who has a fishing quest called “[Daily] We are the Ownders of this Island!”. The quest requires you to catch and give him a Yellow Swordfish but only rewards you with Oquilla Coin x1 and no sailing EXP or other items so you can skip this quest if you don’t have much time.

Next, head back to the wharf manager and go up the wooden stairs next to him. Keep following the pathway heading south of the island until you reach Curio the otter merchant. He will have two quests for you to accept and complete. Now that you have all the kill quests we can currently obtain, head north west of Oquilla’s Eye. There are Young and Adult Oceanstalkers which you can kill to complete the first kill quests. Then go east and kill the Hekaru needed for the other kill quests. Once you’ve completed all the quests, head back to Oquilla’s Eye to hand them in and pick up the follow on quests. Ravikel will now have additional quests for you to pick up. There are 6 different quests and you can choose between the Young sea monster quests or the Adult sea monster quests. Completing the Adult versions of the quests will give you more/better rewards and can be solo’d with a +10 green gear Caravel but may take you a while to complete. I recommend finding a group if possible to speed things up.

Now that you have the additional 3 quests you will need to go and kill the last 3 sea monsters and finish the rest of your dailies. These sea monsters spawn quite far into the great ocean so the fastest route is to use a Traveller’s Map from Oquilla’s Eye to send you to Port Ratt and then remote collect your ship. Make sure that your ship does not have any items in the inventory and that you remove your sailors beforehand.

From Port Ratt you can then make your way back to Oquilla’s Eye and kill the monsters required on the way. Using the route below you should be able to keep the tide and wind in your direction for most of the way. When you arrive back at Oquilla’s Eye, hand in the quests and collect your rewards. You can now go and do the bartering quest you picked up earlier. After completing this quest there is a follow on quest from the Soldier in the screenshot below. You can now head back to Velia and Port Epheria to hand in the rest of the quests.

There are also two additional quests on Oquilla’s Eye that can be completed daily but both of these quests require you to hand over 150 Oquilla Coins. The two quests can be obtained from Herrad Romsen and you can choose one of them per day.