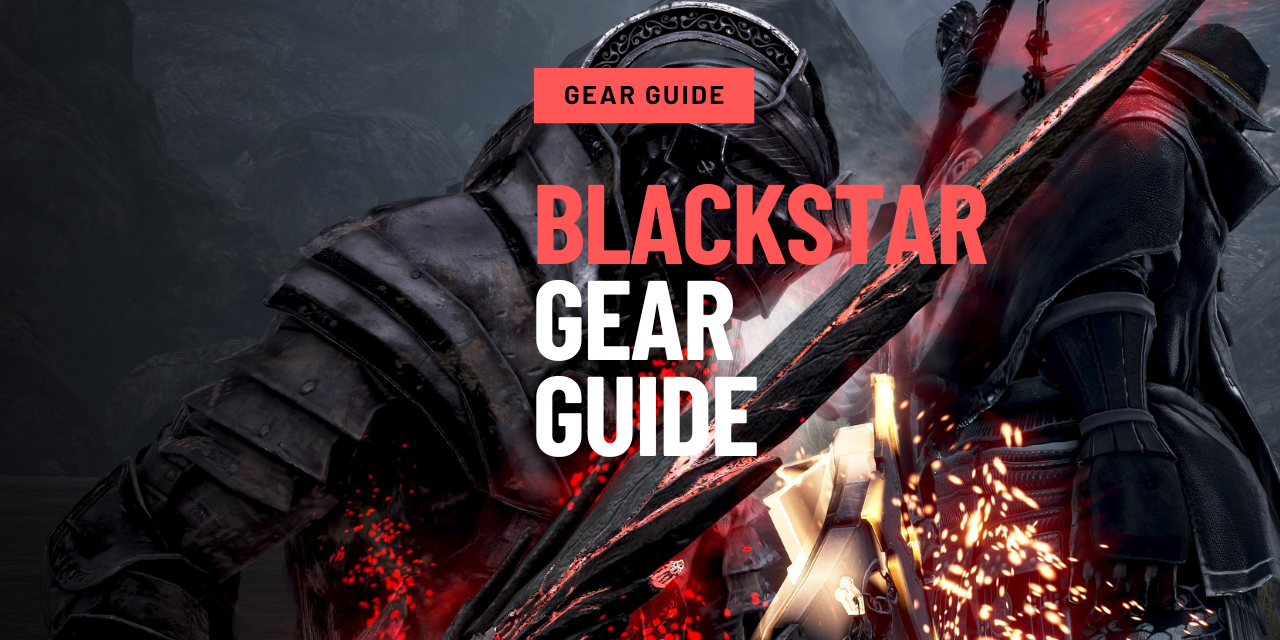 There is also the Godr-Ayed weapon, which is an alternative to Blackstar, it has the exact same stats at PEN, but uses a different enhancing method.

Blackstar gear cannot have caphras levels and is harder to obtain and enhance compared to boss gear.

Should I use Blackstar?

The Blackstar Mainhand weapon is recommended for PVE because of its high AP and additional monster AP. The monster AP works for both your main hand and awakening skills, so going for a TET Blackstar can be better in PVE than a PEN Kzarka. Eventually, a PEN Blackstar would be best-in-slot for PVE and due to it being difficult to enhance, it is a good item to use J Hammers on. You can also go for the Godr-Ayed Weapon, which is an alternative to Blackstar with the same stats. The Godr-Ayed weapon uses a different enhancing method.

The Blackstar Awakening weapon is also an “ok” choice, but it has less monster AP so it is better to only get it after you have acquired a TET/PEN Blackstar main hand.

Blackstar Armors are not recommended due to them being much more difficult to enhance. It is much easier and more obtainable to get a PEN boss armor and put caphras levels into it for immediate gains. Blackstar Armor can be upgraded (like caphras levels) using the Serendia Elvia materials, but these cannot be bought from the market and require hundreds of grinding yourself. In addition, you need a PEN Blackstar Armor to upgrade to Fallen God/Labreska (best in slot armors), which is far more difficult than needing a PEN Boss armor with level 10 caphras. 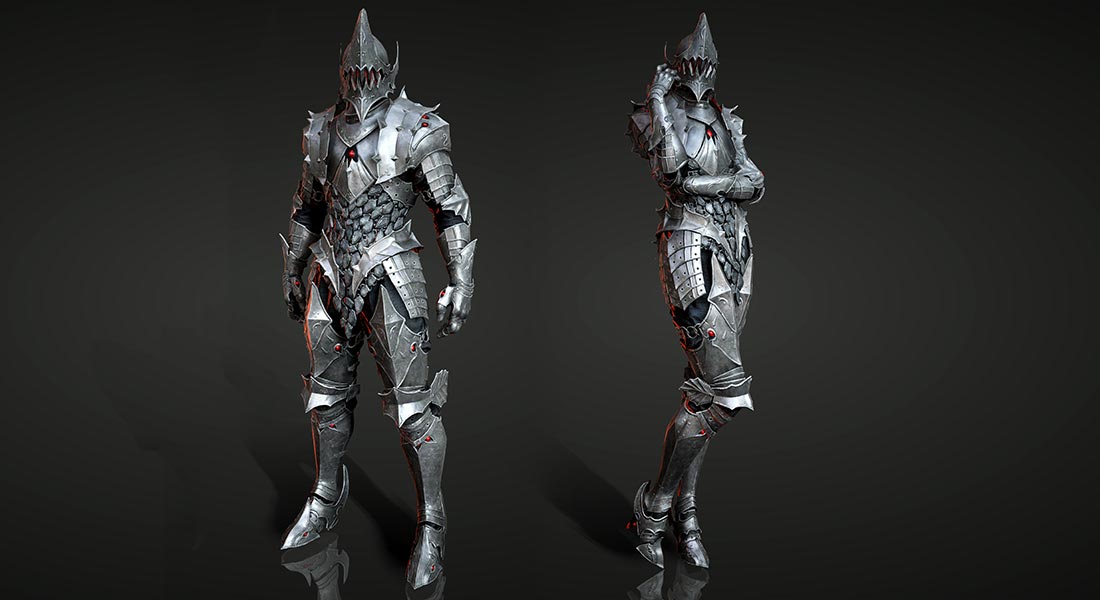 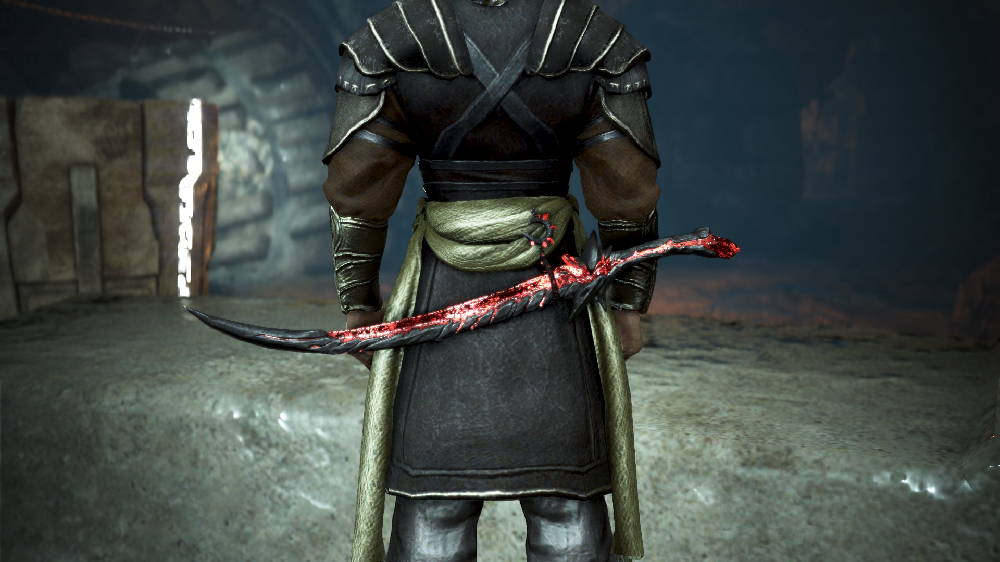 How to obtain Blackstar Gear

To obtain Blackstar Gear, you must finish a questline which can only be completed once per family for each different piece of gear. After completing the questline you have to buy the gear from the marketplace to receive another. You can buy the gear straight from the marketplace and equip it without needing to do the quest, but if you would like to create your own Blackstar gear you have to do the quest yourself.

It is also worth noting that if you are doing the weapon questline you will receive a weapon for the class that you complete the quest on.

How to start the questline:

Once you have everything you need, you can start the questline by right-clicking the Remnants of the Rift item.

Take the Remnants of the Rift item to Martha Kiyen located at Northern Wheat Plantation to begin.

You can then choose the correct quest.

How to complete the questline:

Once you get up to the quest To the Altar of the Fallen God. You need to create Concentrated Boss’s Aura x3.

After defeating the boss you will be sent to the cave at Helms Post to complete the quest line. If you are completing a Blackstar Armor piece questline you will also need the Specter’s Energy item at the end. However, this is not needed for the weapons quests.

Remnants of the Rift item in your inventory to begin. You will be taken to Martha Kiyen located at Northern Wheat Plantation. You can then choose which of the Blackstar quests you would to complete. In this example, we will be walking you through the Armor questline since it has extra steps at the end, but both are very similar. 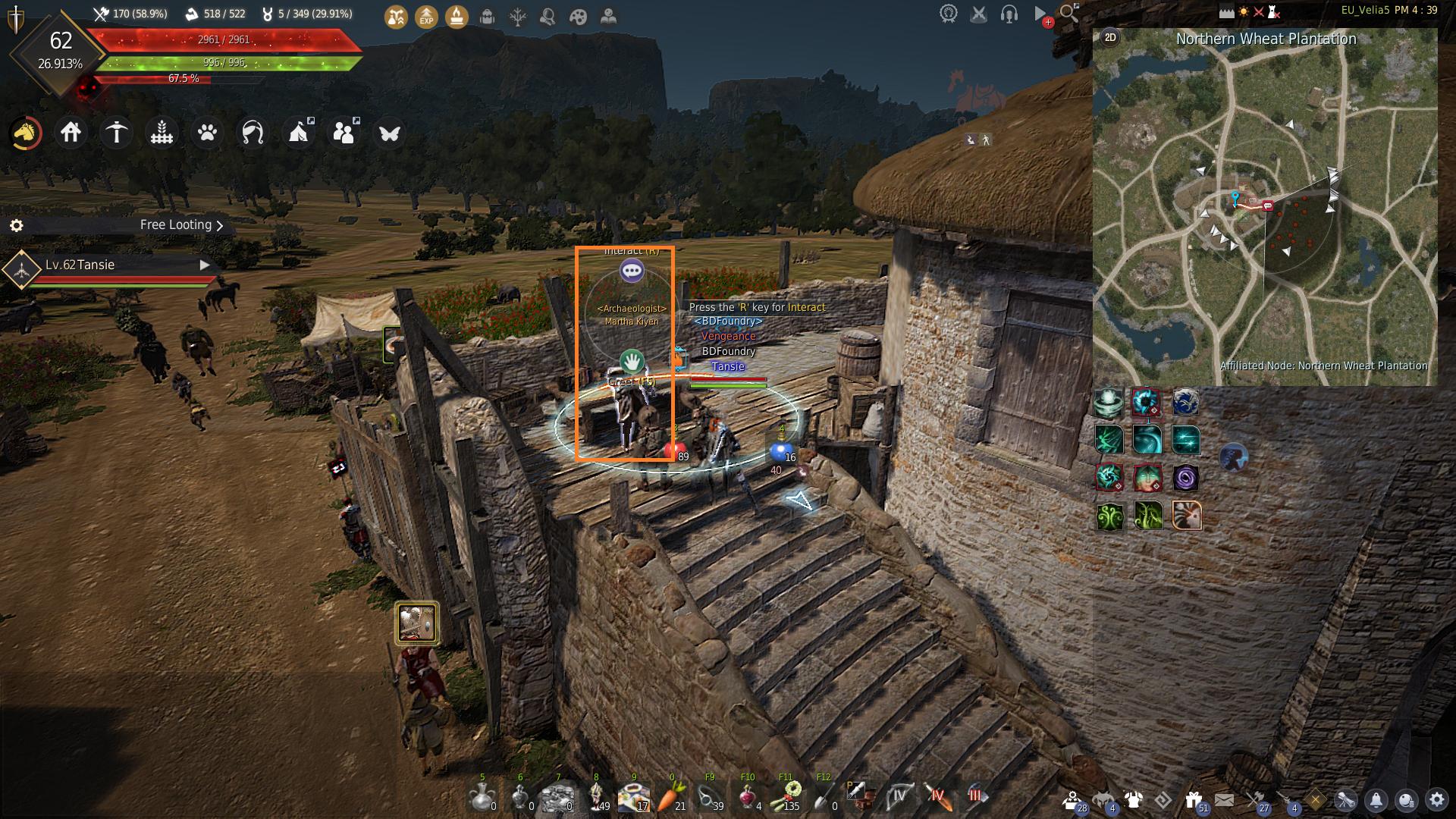 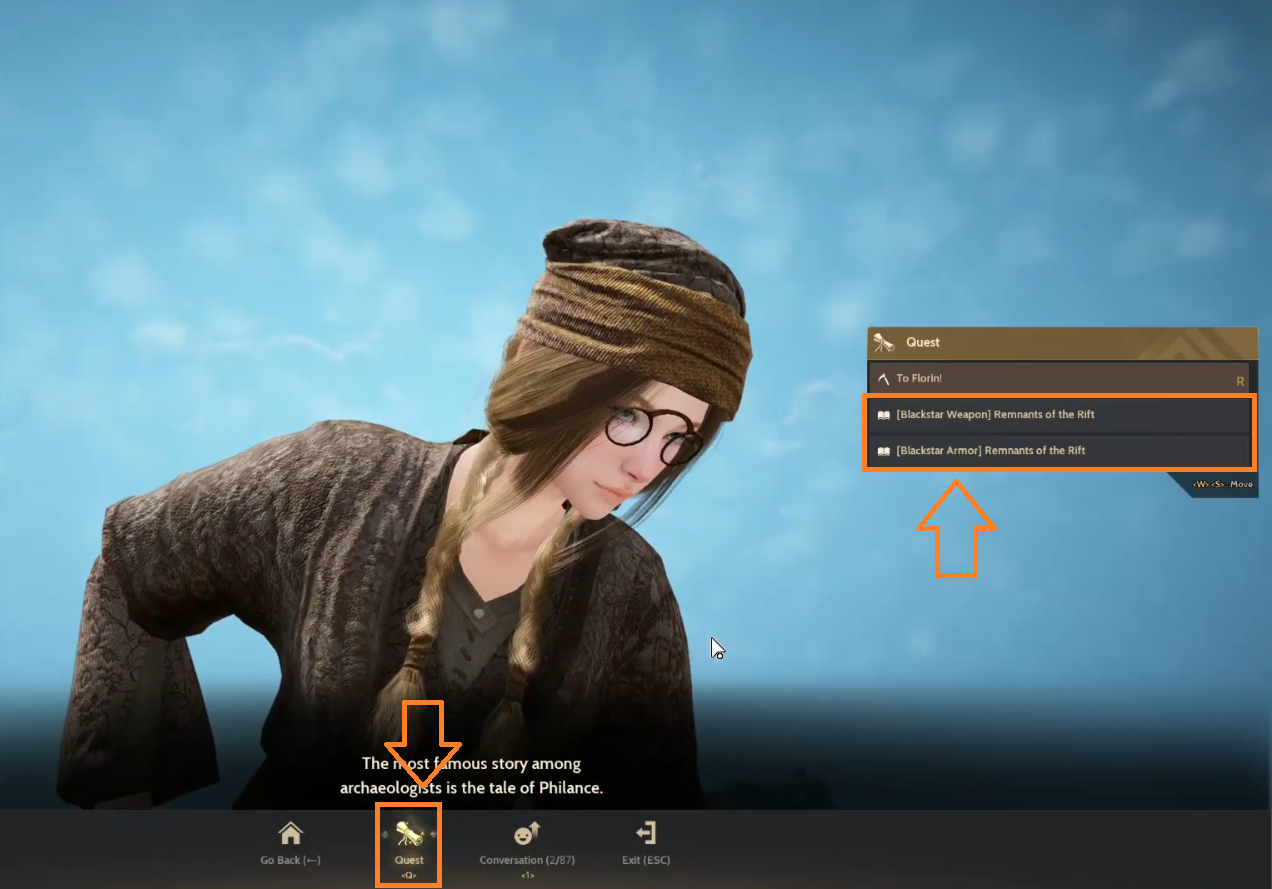 Next, you will be taken to Star’s End to meet up with Martha and hand over the Remnants of the Rift. 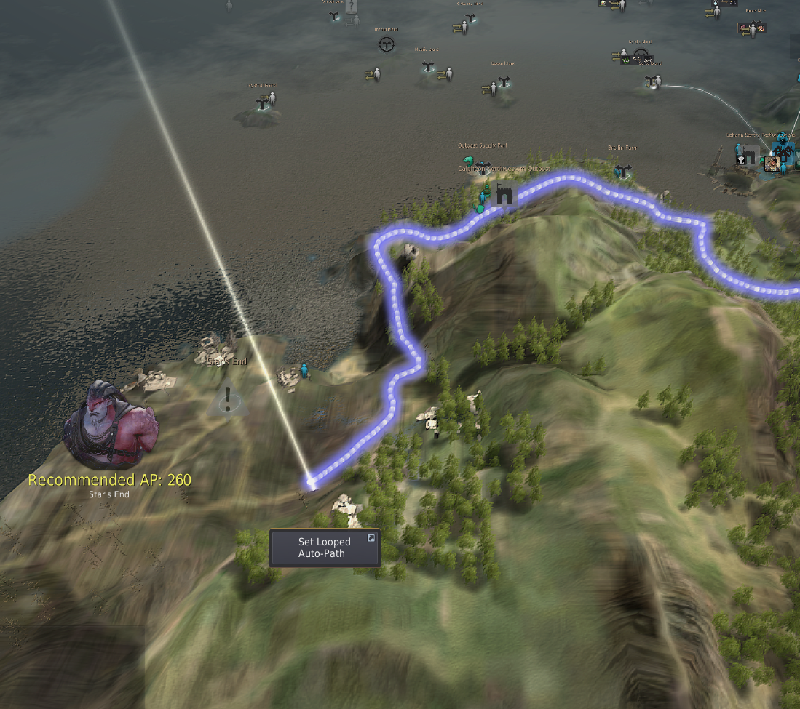 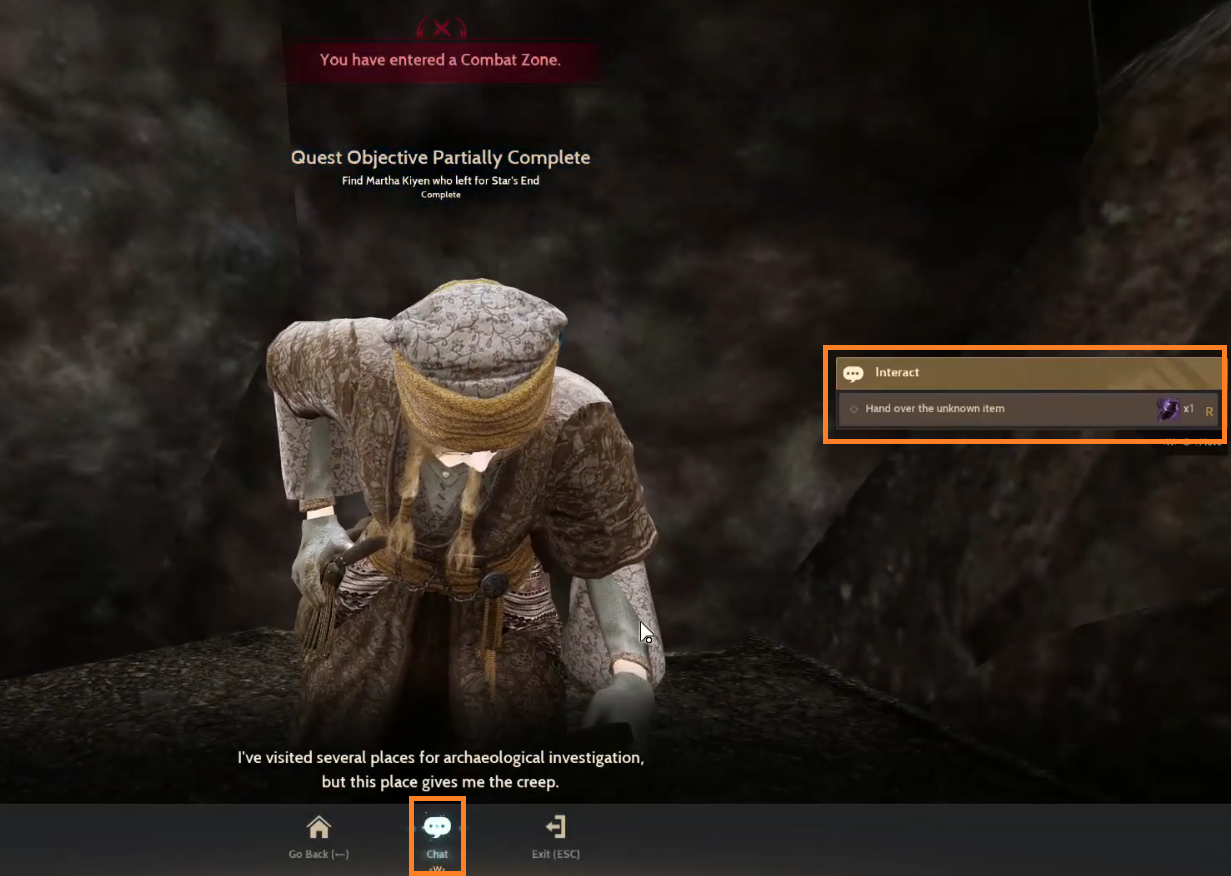 Go to the marked location and interact with the two Black Meteorite located around Star’s End then go back to complete. 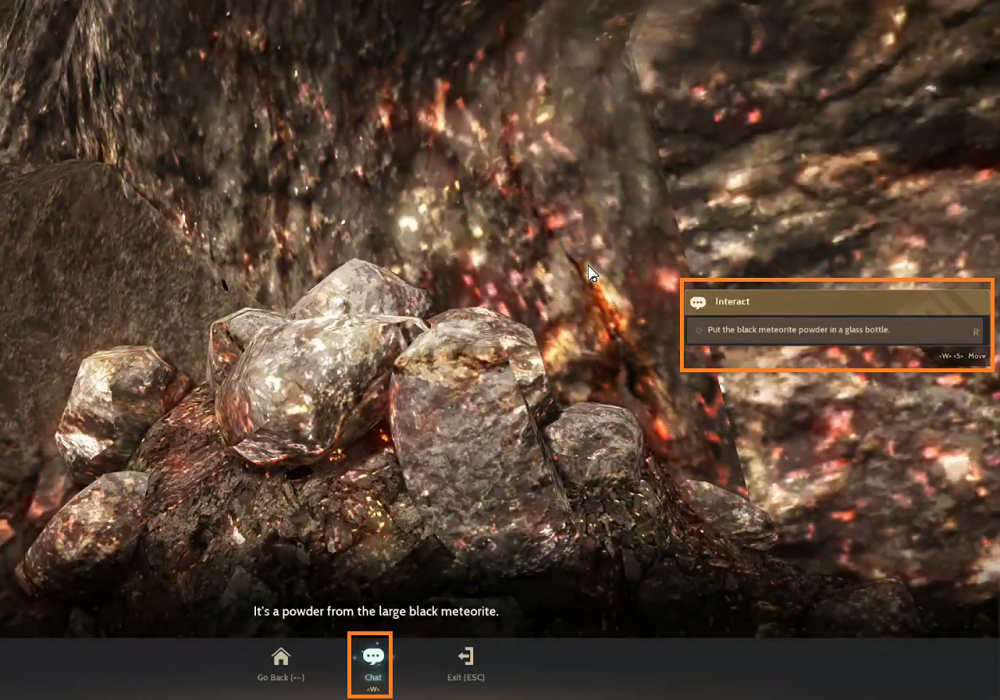 The next quest requires you to interact with the Cows nearby to collect their blood. Go back to Martha afterward to hand it over and complete the quest. 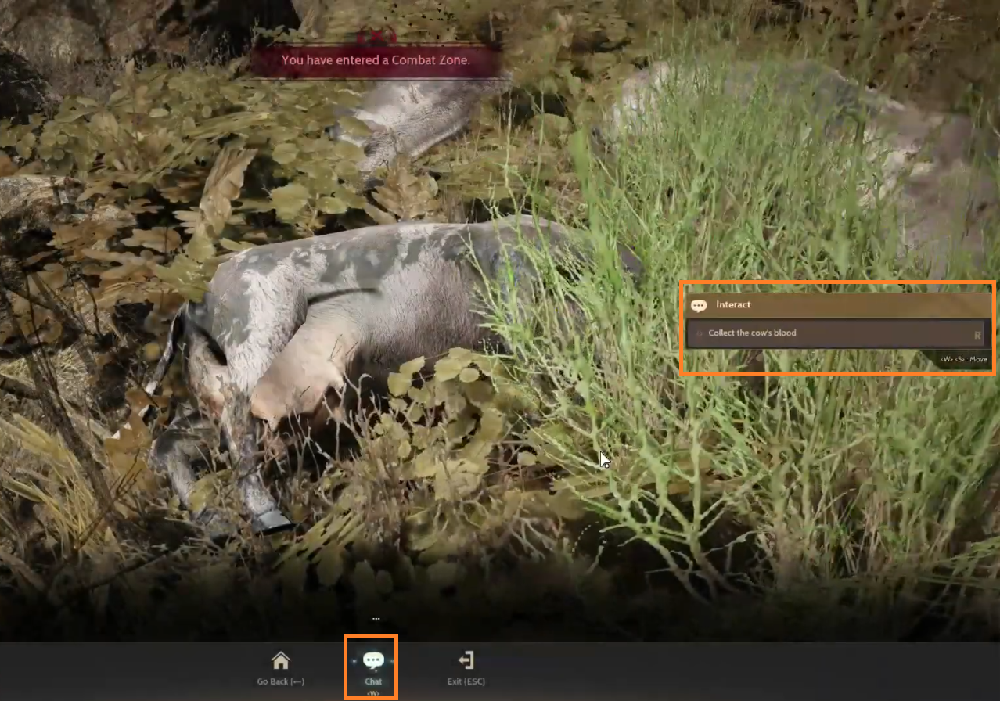 Head over to Contaminated Farm now which is located just north of Calpheon. Speak to Gorgath and pick up the next quests. Use the chat option and select “Analyze the blood sample together” to complete and continue. 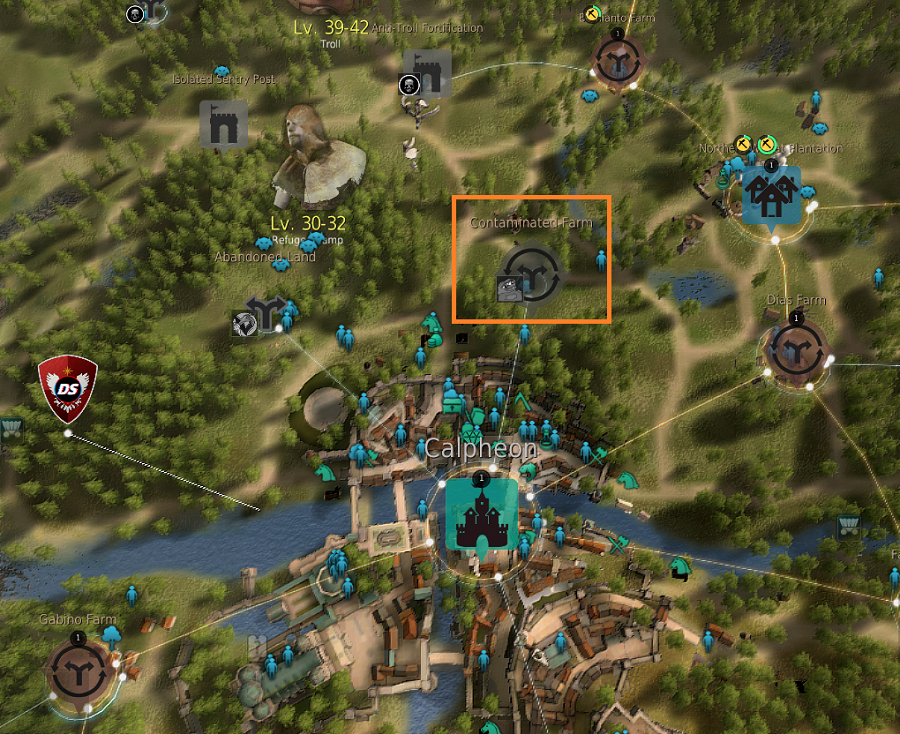 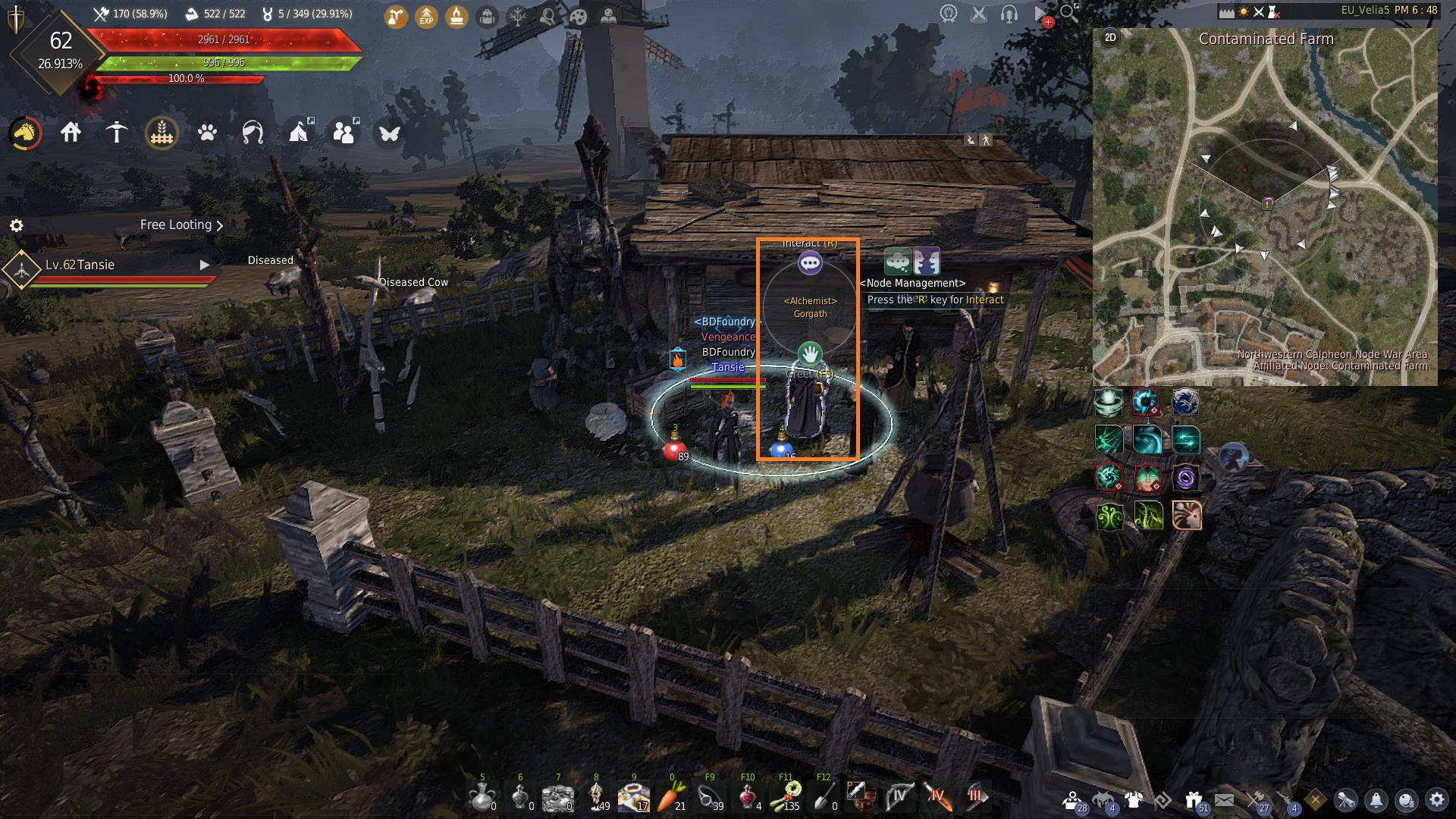 The next location is Caphras Cave which is located west of Florin. Go inside the cave into the secret part of the cave and interact with the Caphras Journal on the bookshelf above the ladder (on the right side of the cave). You must then go back to Contaminated Farm to speak to Gorgath again. He will give you an item called “Eye of Anguish” which is required later on. At this point, the questline will also split into two and you can choose between the easy or hard route. 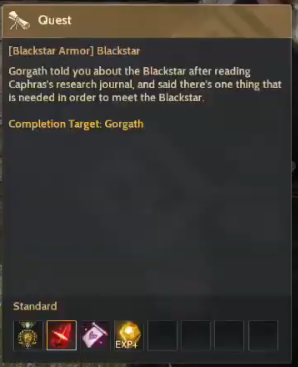 Once you are at the Brazier, create the Eye of Desolation. This is done by first Processing (L) > Heating, three base boss gear items. You can use any boss weapon or armor but it must be unenhanced. This will give you an item called Concentrated Boss Aura. Once you have 3 of these, use the Manufacture option to combine the Eye of Anguish and Concentrated Boss Aura to create the Eye of Desolation. This is used to summon the harder version of the boss which has a recommended AP of 260. 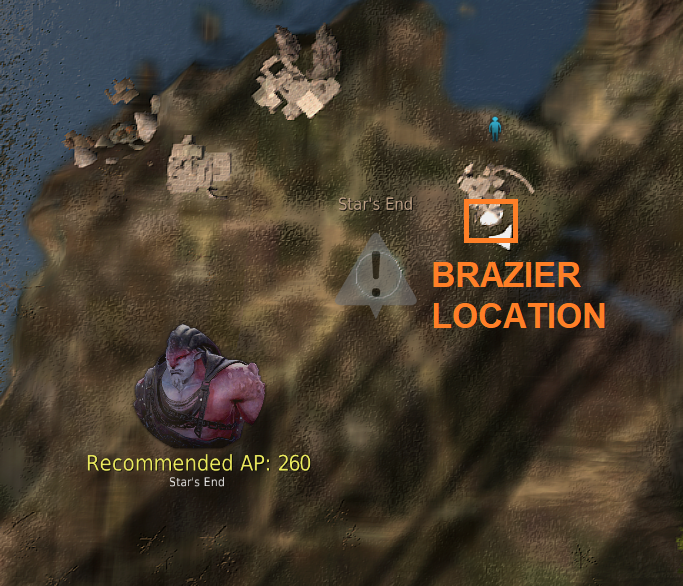 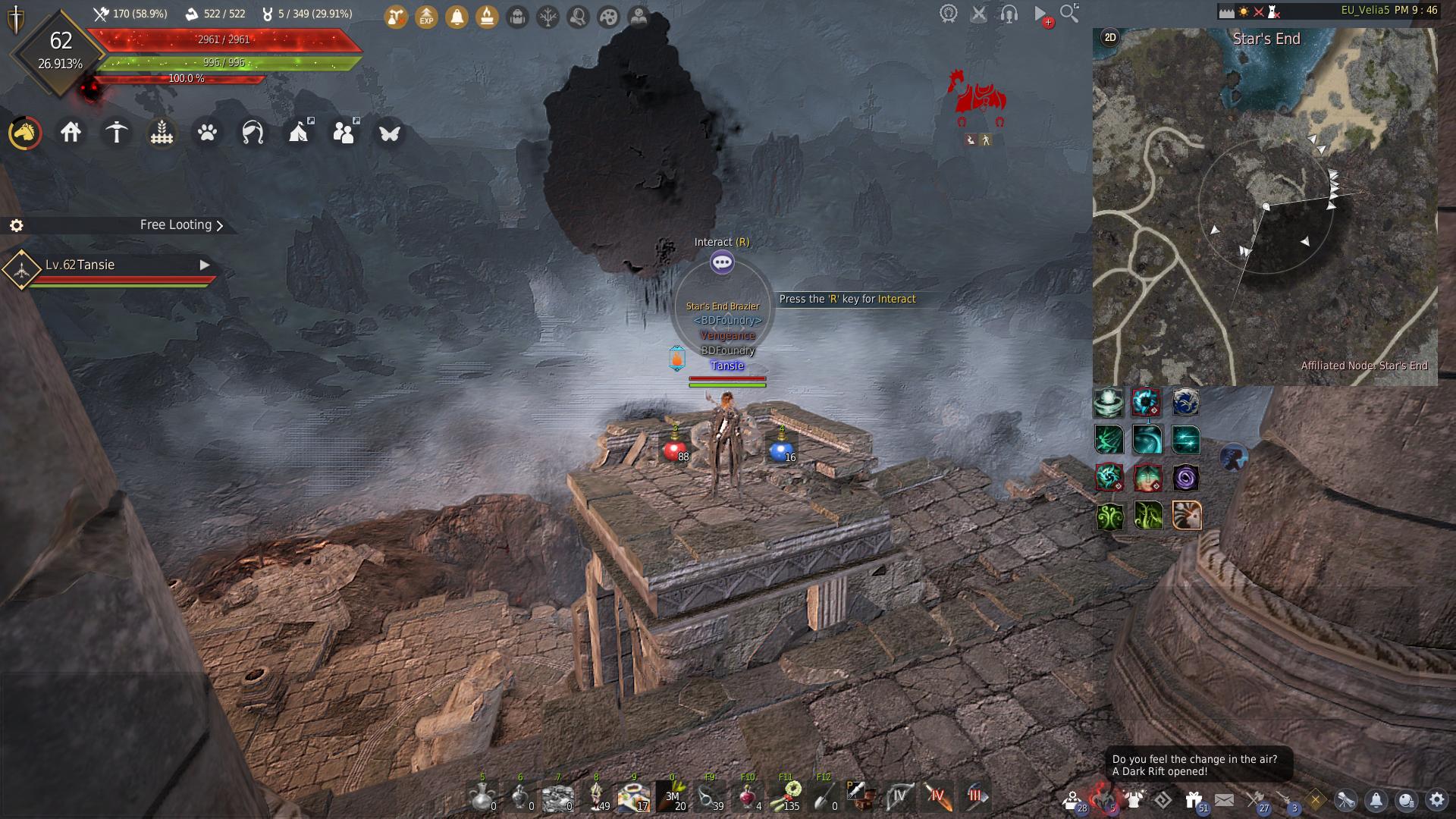 After defeating the boss, go back to the Brazier to complete then head to Calpheon and speak to Dobart. He will then send you to Helms Post where you will complete the final part of the questline. 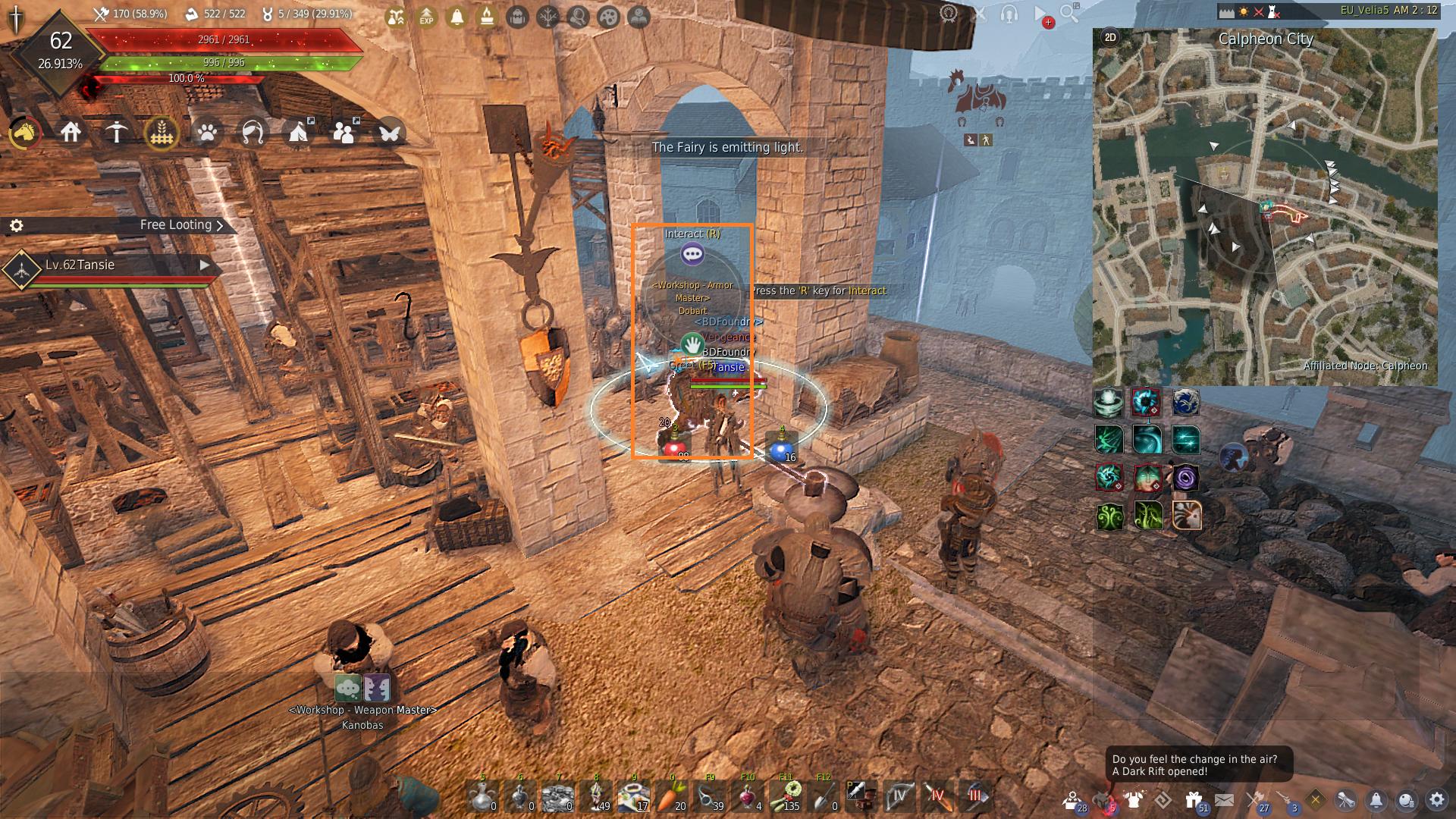 Head inside the cave at Helms Post and speak to Dorin Morgrim. Give the Blackstar’s Claw to him then use the chat option again. Interact with the Crystal Ball in the center of the room then speak with Dorin Morgrim again. 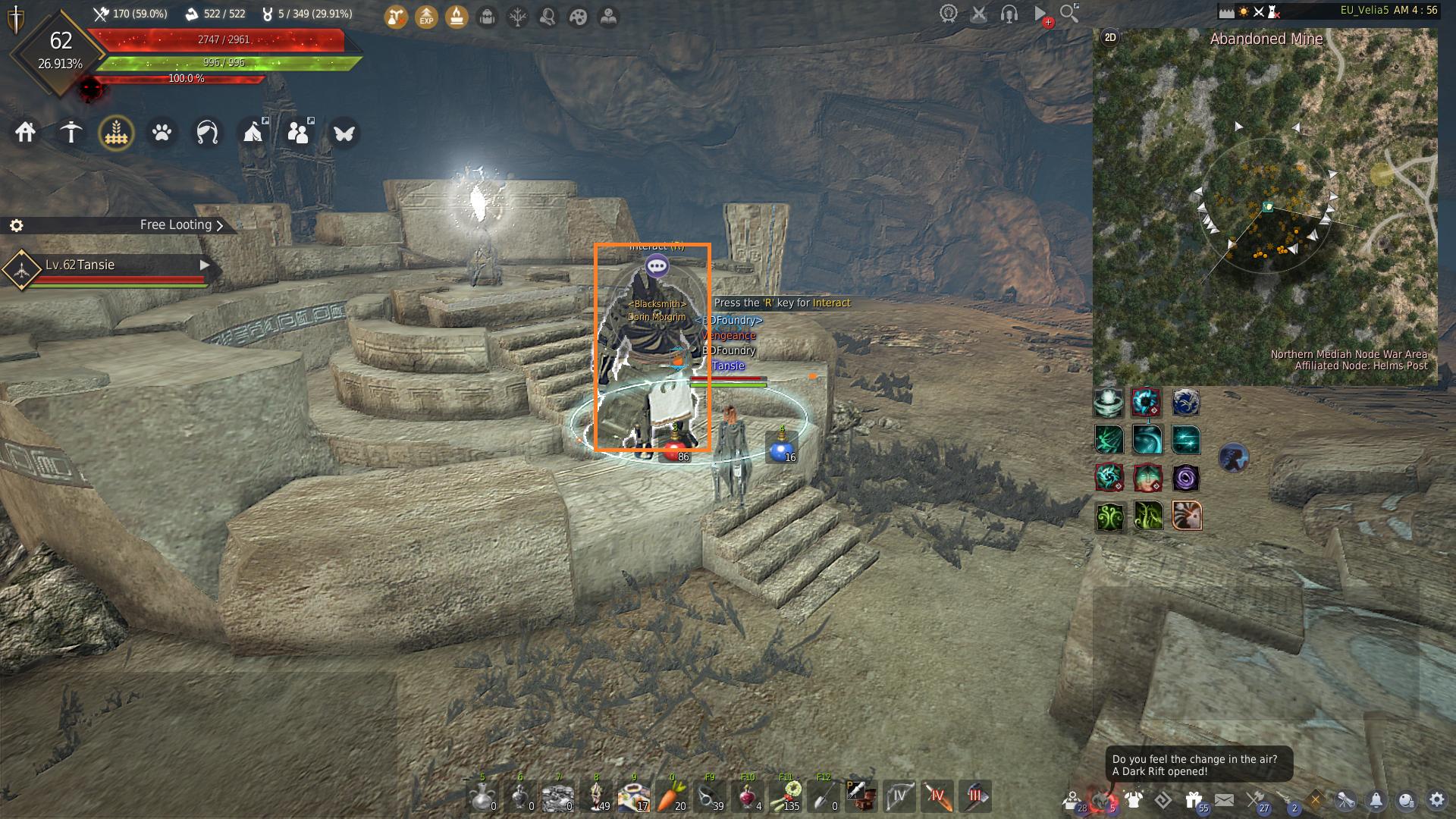 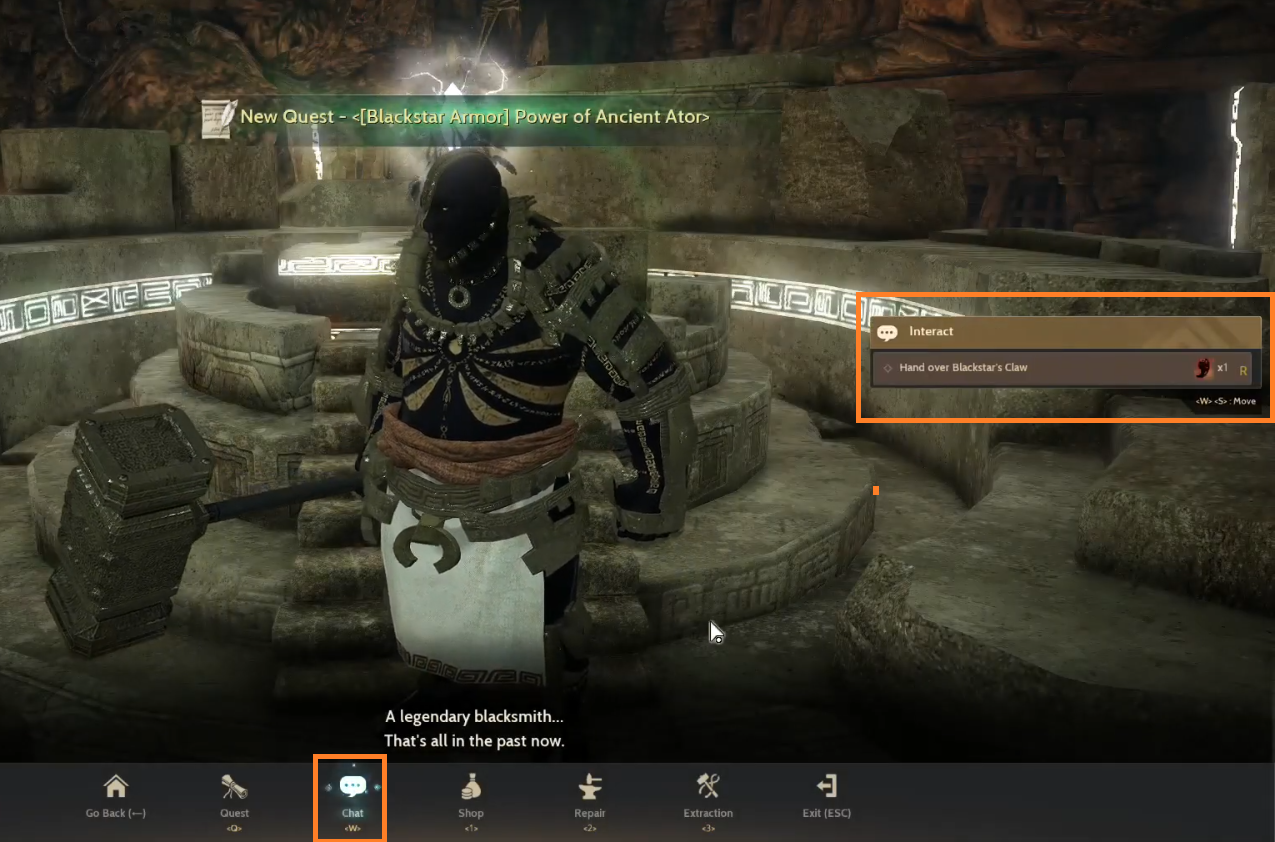 If you are doing the questline for any of the Blackstar Armor pieces then you will now need to hand over the Specter’s Energy.

Finally, accept the last quest from Dorin Morgrim and use the chat option to hand over the Blackstar piece. Interact with the Crystal Ball again to craft the Blackstar gear then go back to Dorin to receive the forged Blackstar gear. 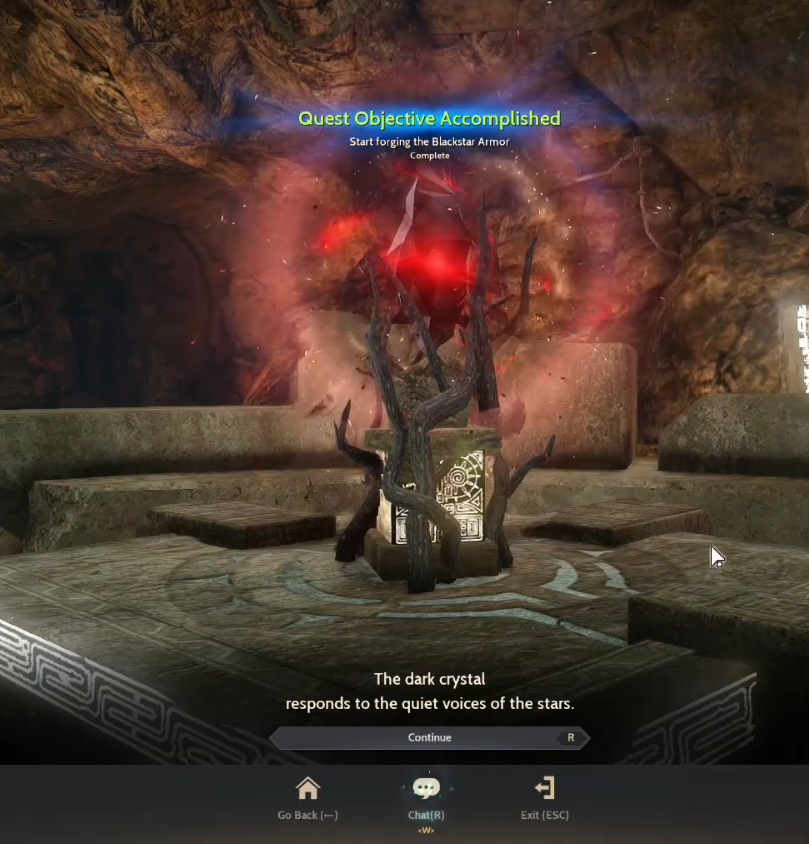 Blackstar gear is more difficult to enhance than regular gear or boss gear and does not use the same enhancing materials.

Each failed attempt will result in Max Durability -10 on the item.

When enhancing between PRI to PEN, you will need:

Each failed enhancement attempt will result in Max Durability -20 on the item.

How to obtain Mass of Pure Magic

Mass of Pure Magic cannot be bought or sold on the marketplace. The easiest way to get the item is by grinding at spots in Serendia Elvia, Valencia, Drieghan, Kamaslyvia, and O’dyllita. If you are really struggling to obtain enough Mass of Pure Magic you can also send workers to the Mountain of Division Excavation node.

To connect the Mountain of Division Excavation node you will need 10 CP from O’draxxia. You can use our Node Calculator Map to plan your route in advance. Mass of Pure Magic can also be obtained in other ways:

Obsidian Specter’s Energy and almost all of the materials required to create the item cannot be sold on the market, meaning you will need to grind them yourself (which can take a long time).

Obsidian Specter’s Energy you need to use Simple Alchemy with the following ingredients: