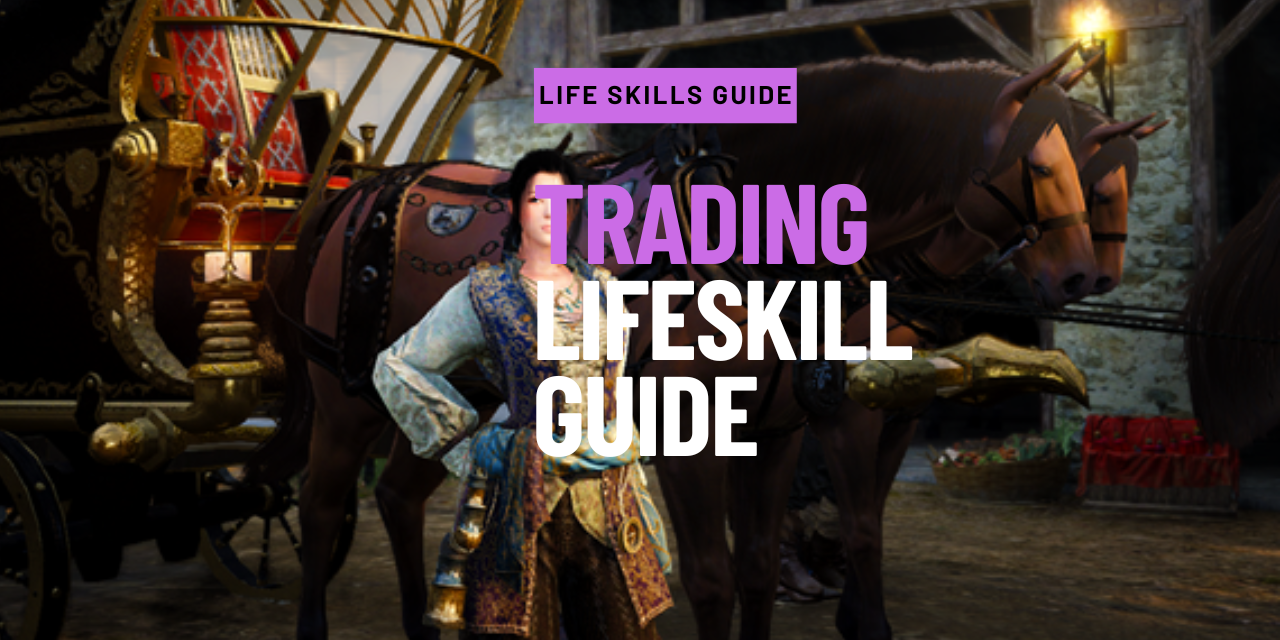 Trading is currently not in its best state. You may have heard about the Desert Trading buff and Crate trading, but this method is not as profitable as it used to be in 2017 and 2018. It requires high-level Trading life skill and a lot of time investment. It also ties up big sums of silver, as well as Contribution points and workers, which could be making you passive money anyway. All of this is worth noting if you are looking to seriously get into the Trading life skill. This post on reddit explains why Trade Crates aren’t as good as they used to be.

Trading also does not have any Life Skill Mastery equipment or benefits.

That being said, this guide will go over everything you need to know about Crate trading for profit, as well as the basics for anyone completely new to Trading.

Things to know before you get started:

How and Where to buy Trade Goods

To buy trade goods, go to a Trade Manager NPC and press “R” to talk to them. Then, click the “Trade” option to view the goods they sell.

It is advisable to buy goods that are lower than their regular price (less than 100%) so that you can “buy low and sell high”. You can view the value of the goods in each town by pressing “Market Price”, this will consume one energy.

Once you have found something you want to buy, click “Take” and enter the amount you would like to buy. At the bottom, you will see the cost, weight, and space this will take up. When you are ready, click “Purchase All” in the bottom-right corner. There are 5 ways of transporting trade goods:

Along trade routes, there may be bandits that may attack you and they can kill you if you are AFK and get stuck in the road. You cannot attack the bandits and should be able to easily outrun them but watch out if you are AFK or semi-AFK. You can see bandits on your map with this icon.

How to Sell and Bargain

Once you have arrived at a town/city you can sell the goods by going to the Trade Administrator and pressing “R”. On the right, you will see a window that lists all of the goods you have.

Click “Sell All” to sell the goods for the standard price, or click “Bargain” to spend 5 energy and try to increase your profit. If you fail to bargain it will not affect the price but you will have to spend 5 energy to try again.

You can get more tries to move the scale by wearing the trading costume, the better the costume, the more extra tries you receive. Most players make a profit from Trading by creating Trading Crates. These crates have to be “packed” by a worker in a city and then once you have a large number of crates you transport them to Valencia and use the Desert Trading Buff to sell for billions of silver.

However, to start making income you must have at least Artisan 2 Trading level. This will unlock the Desert Trading buff mentioned above and when used, this buff gives you +100% income from trading to Valencia city.

To make the crates, you will need a Wood Workbench or a Mineral Workbench and a worker to pack the materials into the crates. I recommend using this Crate Calculator to view all the crates you should be making more profit and how much you can earn.

You want to use Artisan Goblin workers so you can pack crates as quickly as possible. If you are away from your computer a lot and can’t feed your workers often, then it may be better to use Giants. You also want to get the best skills for packing crates, which are: Ore/Timber Packing Skill, Thrifty Skill, and any other movement speed or work speed skills.

You can also send a worker from one town to another to pack a crate at the workshop and the crate’s origin will be from the same town the worker is from. Since you will be selling the crates in Valencia, it is best to pack crates with an origin of Grana, Old Wisdom Tree, Trent or Calpheon, for the trading distance bonus. Old Wisdom Tree doesn’t have any lodging available but you can buy lodging from the Pearl Store and then send the workers to workshops in calpheon and the crates will have an origin of Old Wisdom Tree and will be stored at the warehouse there.

The crates take a long time to collect and you will probably only transport them once a month, but it can be a good way of making passive income. Make sure to have your nodes connected to Valencia if you are going to be doing crate trading.

When leveling your Trading, you should try to use as many Life Skill EXP buffs as possible.

There are 3 ways of leveling your Trading:

How to transport the crates

How and Where to get the Desert Buff

After reaching Artisan 2, you will need to complete two questlines to unlock the Desert Trading buff. The only other requirement is that you are level 55+.

After completing the questline you will be given a +50% Trading buff for 1 hour.
To get the 100% buff you need to go and collect it from the node manager at Pilgrim’s Sanctum: Sharing. This will cost 100 energy. You cannot get the buff whilst you have the +50% buff from the questline and the buff only applies when selling trade goods at Valencia (not Arehaza or any other location). Other Types of Trading

Illegal trading is the riskiest form of trading and an interesting concept that could have made Trading more interesting. Unfortunately, it has not been updated since the launch of the game, so it is definitely not worth doing, and many players don’t even know it exists.

The NPCs that sell illegal trade items only appear at night in main towns. They can usually be found behind buildings and in more obscure places. They are labeled as “<Black Rat League> Mysterious Man”. After buying the items, you are labeled with a bright red icon above your head indicating that you are carrying illegitimate goods and you can be tagged in PvP. Note: if you put it on a horse or a coach, they will be labeled instead of you.

To sell the items, bring the item to any Trade Administer other than the one in the city that it was bought in. Like regular trading, the farther you go, the higher it will sell for. However, due to potential player killers it may be better to travel a shorter or more obsolete route. Once sold to the Trade Administer, you lose 5000 karma per item sold.

Imperial trading items reset every 4 hours and only a set amount of items can be sold. The trade items are regular trading goods you can purchase in main towns, but will sell for 250% of their price when taken to the target NPC listed. Each main town differs and the easiest way to figure out which trading goods are currently up for Imperial Trading is to check the Trade Info by going to your ESC menu and then the Life Tab. Every once in a while, there will be a global announcement indicating that a town is buying goods for 200% of its value. This form of trading is rather simple. Before the allotted time or quantity runs out, sell any trade goods to the indicated town. Like any other form of trading, a node must be connected to that town to profit from it. Due to the irregularity and random placement of these events, it is not wise to actively seek this trading method out unless it happily falls under a specific happenstance where the town is already connected in your node setup.