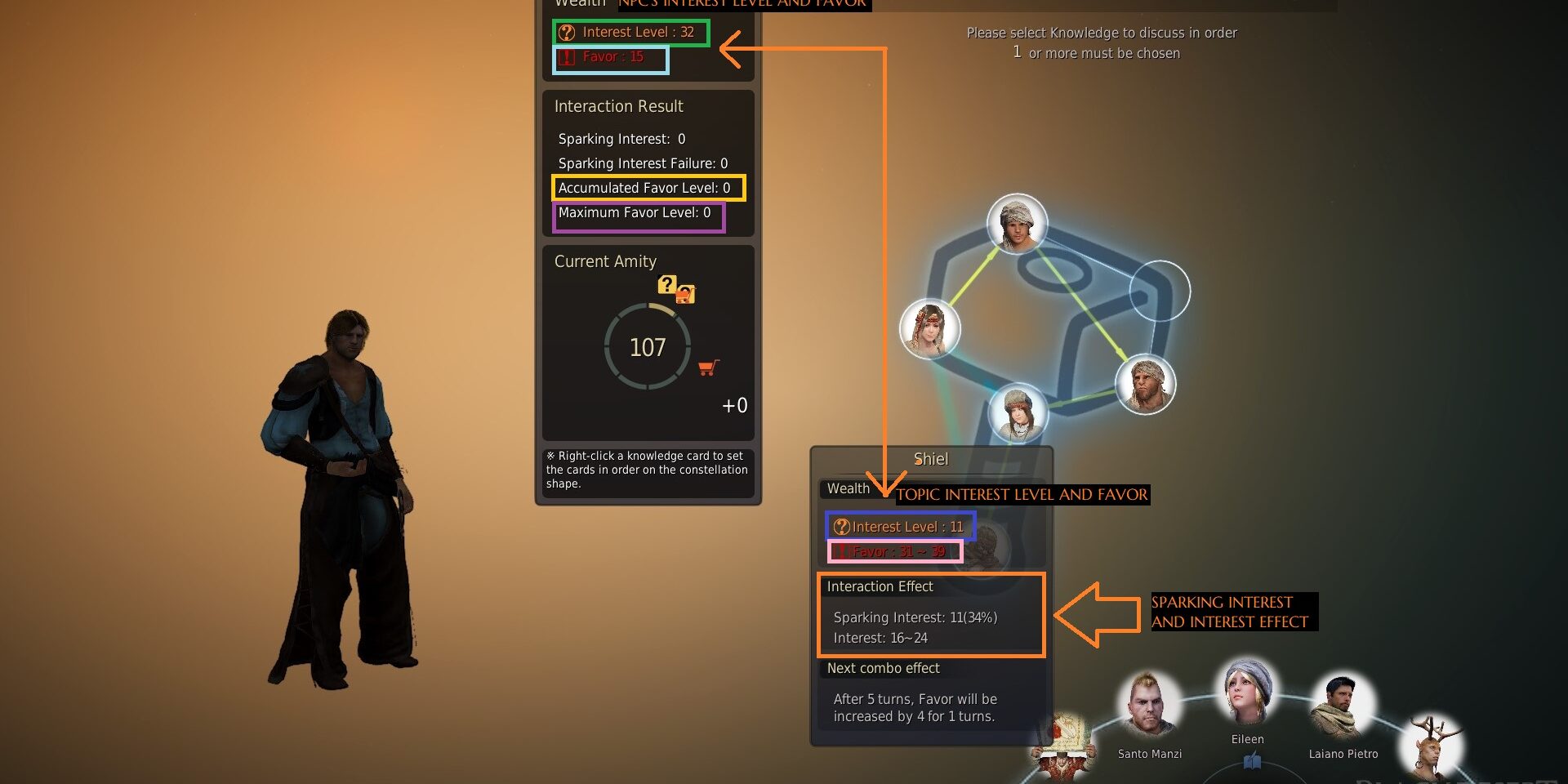 Every NPC in Black Desert has “Amity points” and the higher it is, the more friendly you are with the NPC. Engaging in Conversation with an NPC will increase the amity between you and that NPC. Amity can also be earned by greeting an NPC and is used to unlock various things. To greet an NPC go up to them and press “F1”, this will use energy but is a fast way to earn a little bit of amity. Greeting an NPC will use 3 energy and earn you 3 Amity.

To begin Conversation, you will need Energy. It usually costs 2 energy each time but as you gain more amity with the NPC the amount of energy you need will go higher. You can see how much energy is required for a Conversation and the total amount of energy you currently have. For example, in the image below you can see the current cost is 2 energy and I have 438 energy I can use.

You will also need knowledge so that you have topics to talk about with the NPC. Knowledge is gained in many ways, such as interacting with another NPC, killing monsters, completing quests and exploring new areas. Each NPC has a different field of knowledge that they enjoy talking about and Conversation is only available with them if you meet certain requirements. In the window on the left, you will see the total amount of knowledge topics you currently have and how many you need to unlock Conversation.

For more information on the basics of Knowledge, view our Knowledge guide. 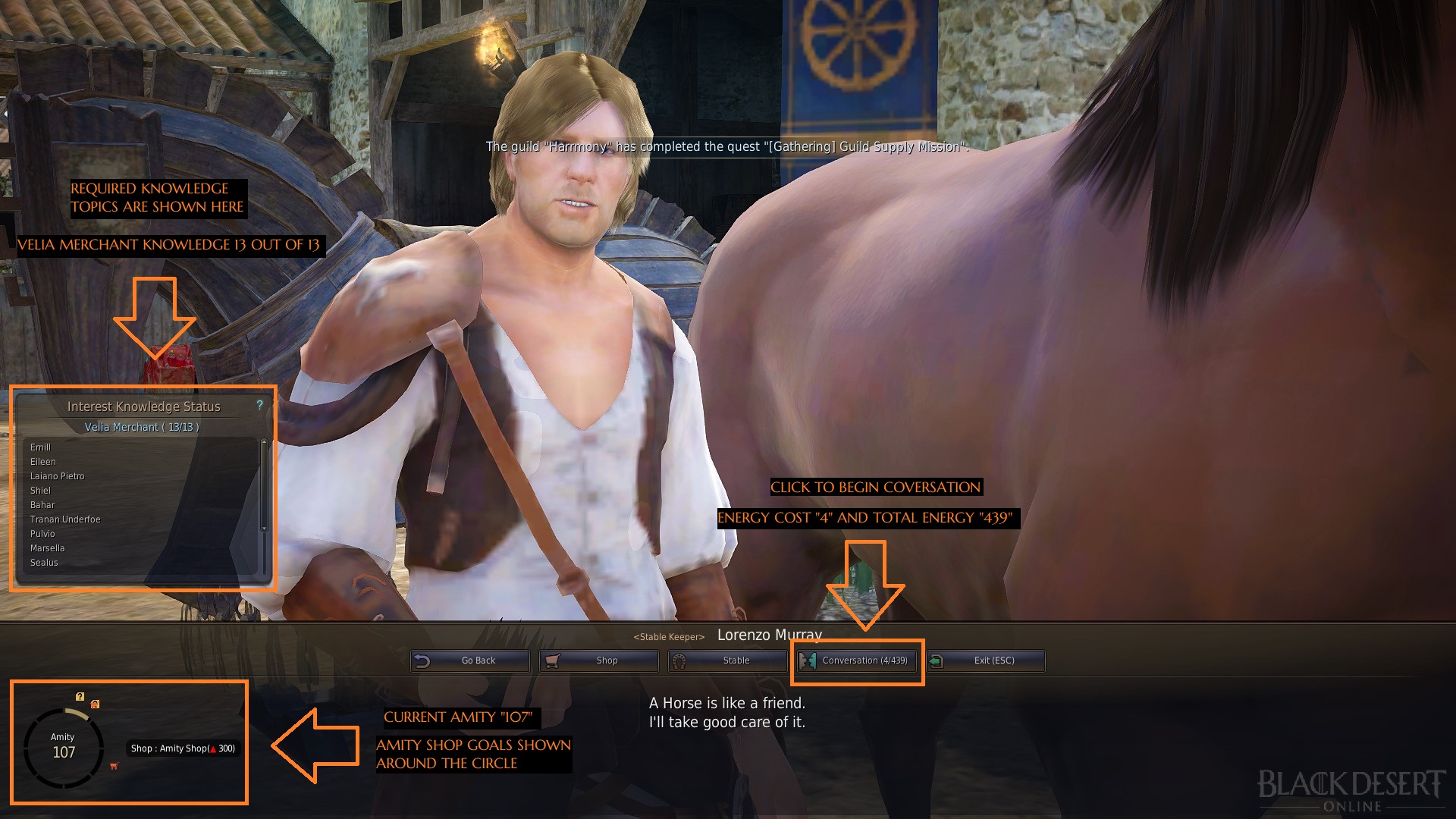 Interact with the NPC by pressing “R” then click “Conversation” to open the Conversation interface.

The Conversation interface will have the NPCs zodiac sign with circles for each topic and lines connecting them. This is the order that each topic will be spoken about. The topics you can select will be shown in the bottom right corner. Right-click a topic to add it to the conversation.

Once you have filled all of the available slots with a topic, you can press the “Conversation” button at the bottom to start talking. As the conversation is carried out you will get a positive or negative response from the NPC which is indicated with a happy or sad face. At the top of the screen you will also be given a goal to fulfill each time and you must meet the requirements to obtain any amity points. Each goal is explained in detail below with advice on how to complete them.

When the Conversation is over, if you have successfully met the goal you will have the option to either keep the conversation going or exit now.

In the image below for example:

It’s also important to note that Sparking Interest can effect the next topic in the chain. If you are successful in receiving a positive reaction, you may have higher chances on the next topic and vise versa. 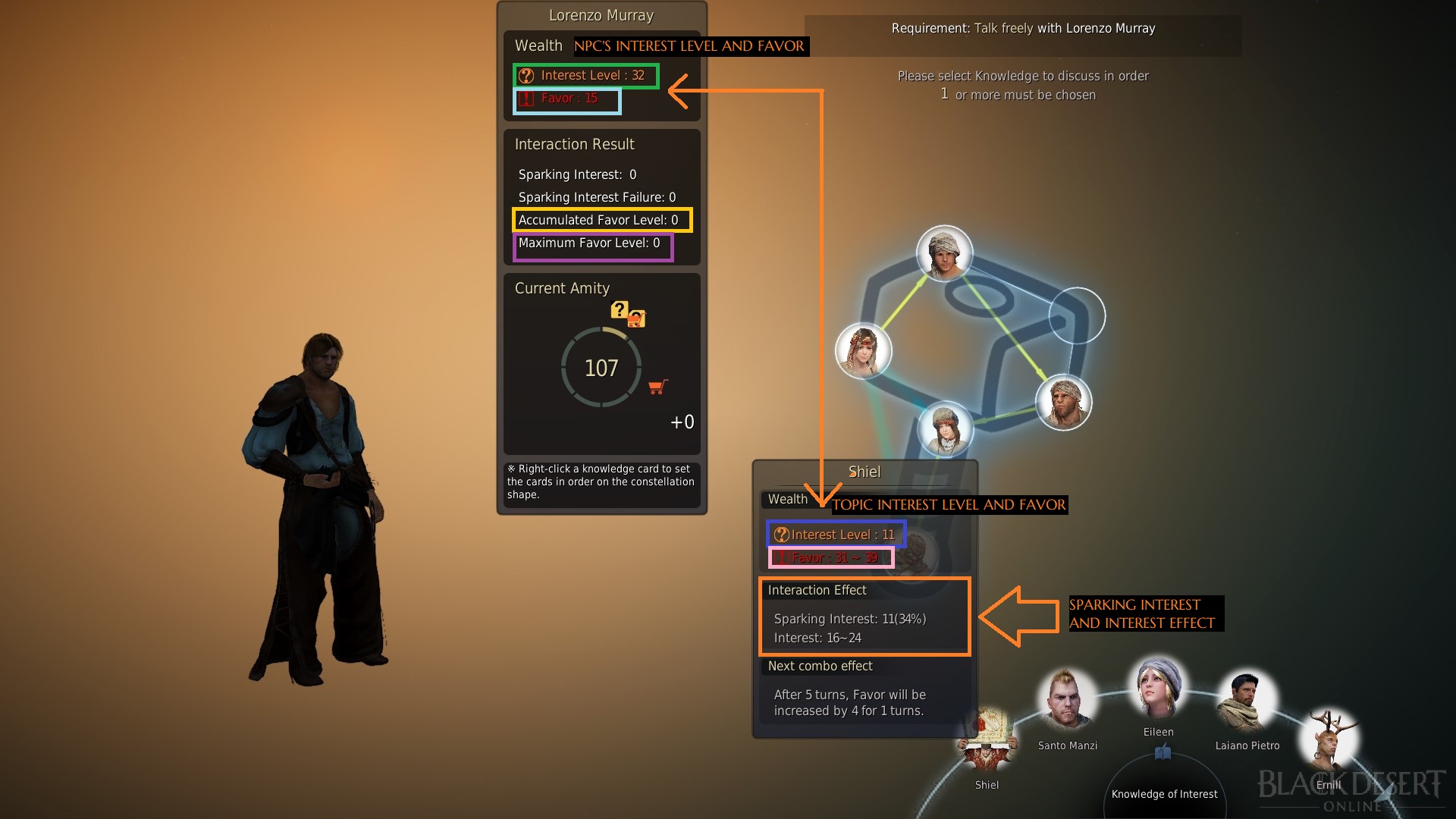 When you mouse over a topic, you can also see it’s Favor. Topic Favor will always remain the same. Interest is calculated by subtracting the NPC’s Favor from the topic’s Favor. Interest effects your Maximum/Accumulated Favor level and the higher this is, the more amity you collect at the end of a Conversation.

You will only receive interest from a topic if you receive a positive reaction from it!

In the image above for example:

Maximum Favor Level can also be reset if you receive a negative response from a topic.

If you Maximum Favor Level is reset due to a negative response, the Accumulated Favor Level will carry across to the next topic.

For example in the image below:

It’s also important to note that Maximum Favor Level and Accumulated Favor Level only appear whilst the next topic is being discussed. 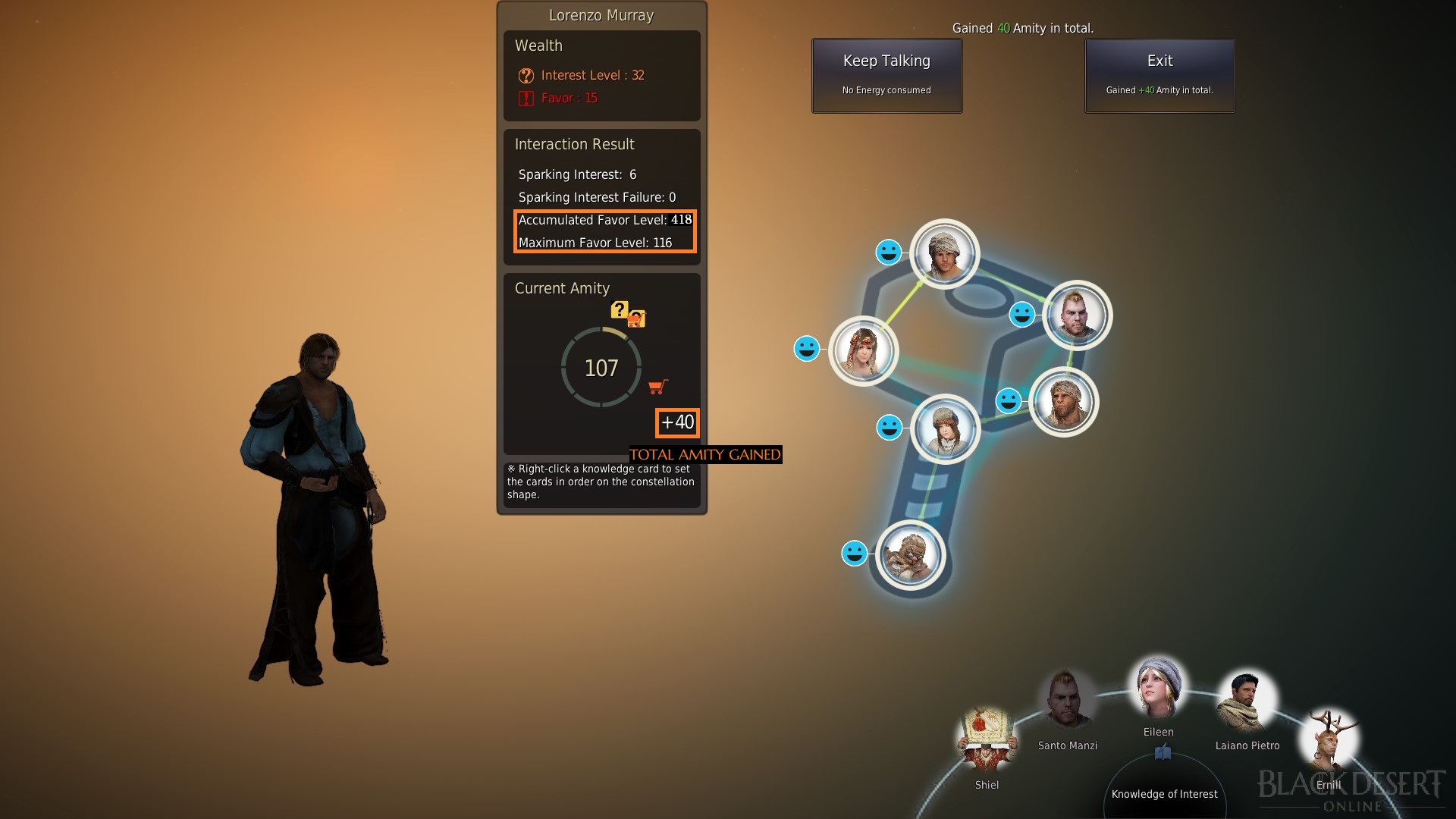 Completing this goal requires you to get enough positive reactions from the topics during the conversation. Depending on the way it is worded you may also need to consecutively spark interest for a certain amount of times. For example: “Requirement: Spark the interest of Lorenzo Murray 2 consecutive times” means you will need to get a positive reaction from him 2 times in a row to pass the goal.

The aim of this goal is to get the number of negative reactions required. Although this means that you won’t receive any/many points, it will keep you in the mini-game and you won’t need to spend energy to continue. Depending on the way it is worded you may also need to consecutively fail to spark interest for a certain amount of times. For example: “Requirement: Fail to spark the interest of Lorenzo Murray 4 time(s)” means you will need to get a negative reaction from him 4 times in a row to pass the goal. 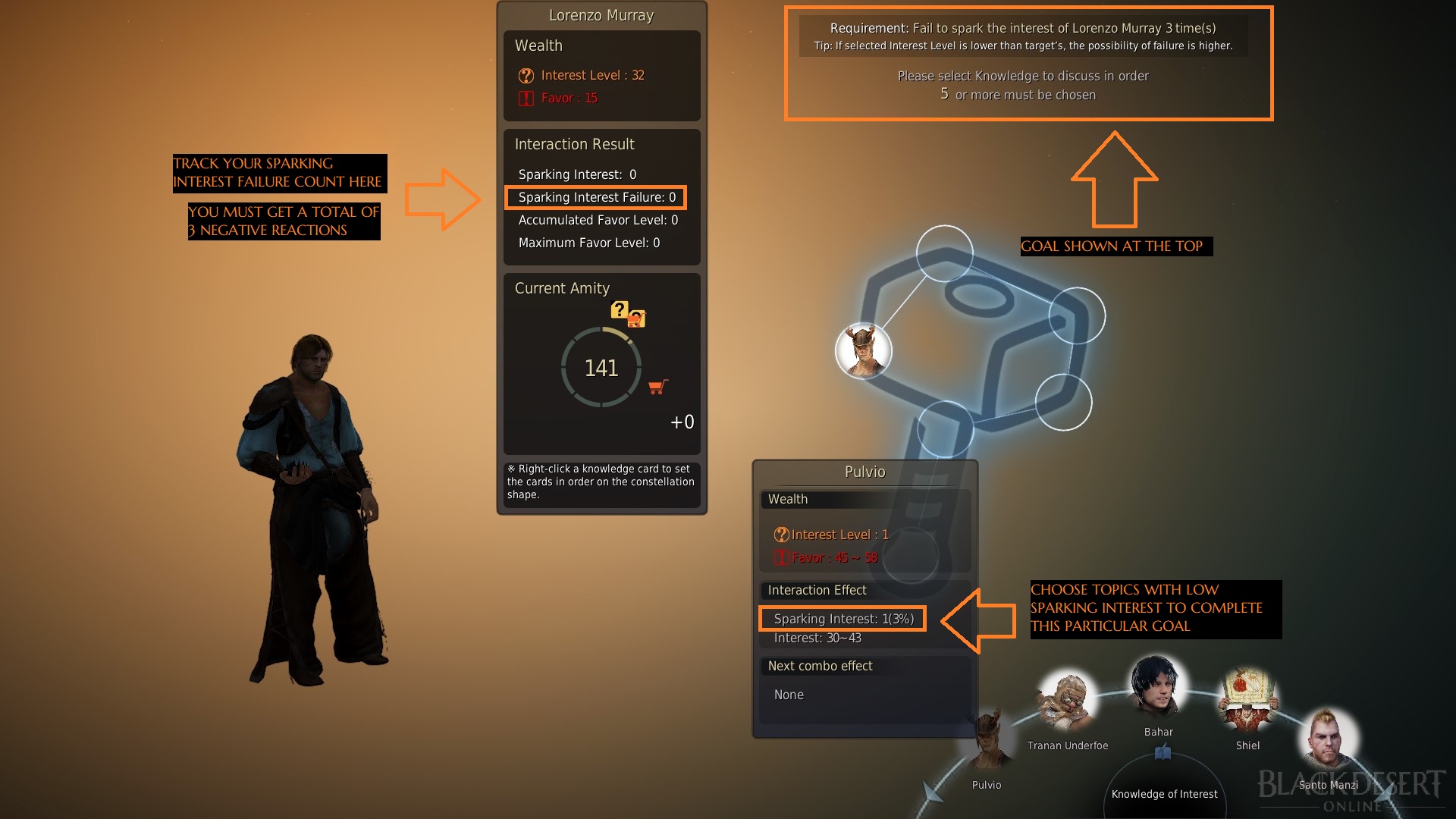 This goal means you can talk about anything and you will pass to the next round. To get as many amity points as possible, pick topics with high Sparking Interest and high Interest to complete this goal. Place the higher Sparking Interest topics towards the beginning of the conversation to get the highest possible Accumulated Favor Level.

Combo effects can be made between the topics to earn extra interest or favor points, which in turn will increase your Maximum Favor Level and Acccummulated Favor Level. The wording can be confusing but once you understand it they are easy to use. 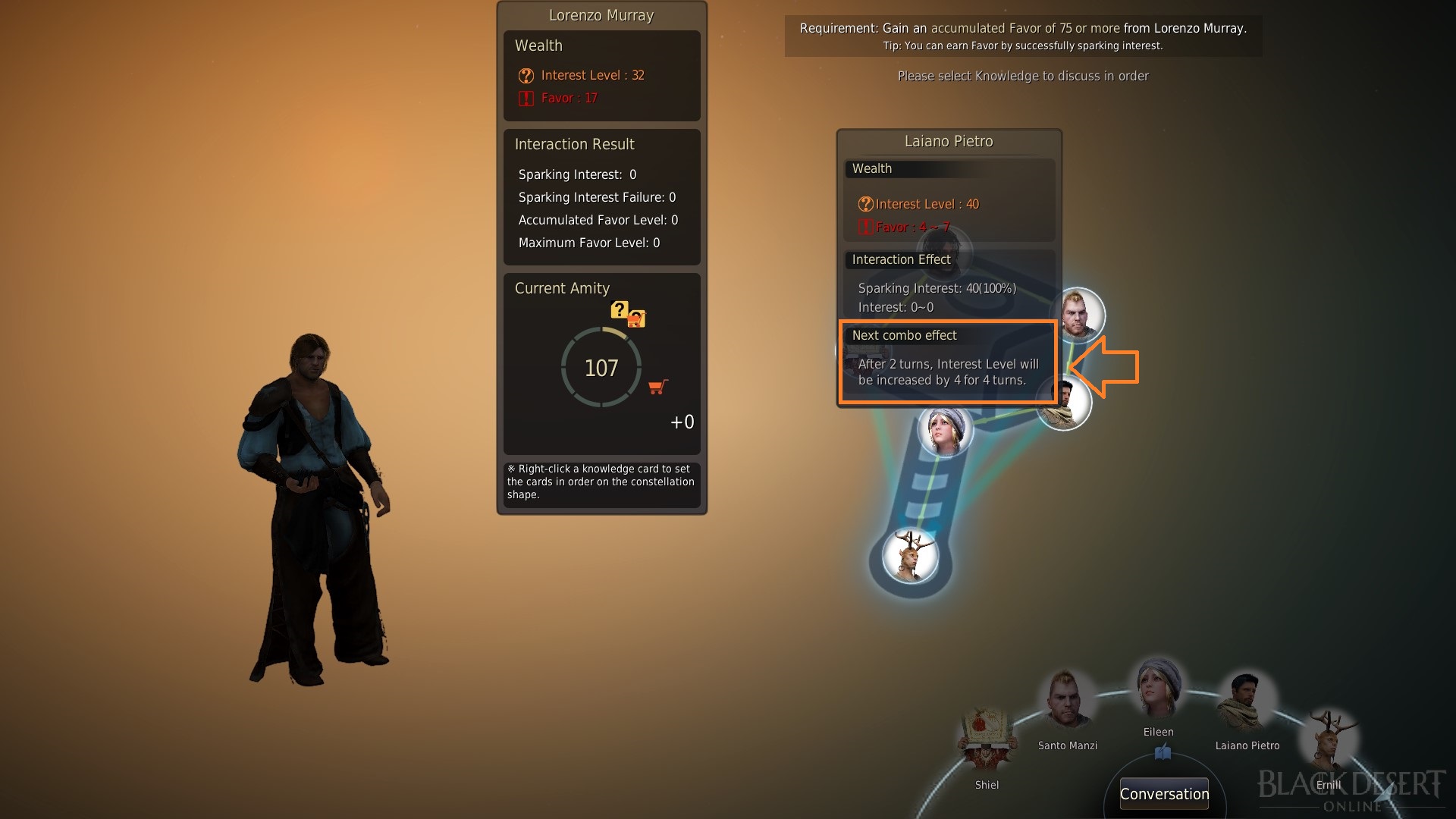 Connections are shown between topics via a glowing blue line and you can view the effects by hovering over the topic it effects. The effects are shown in blue text. 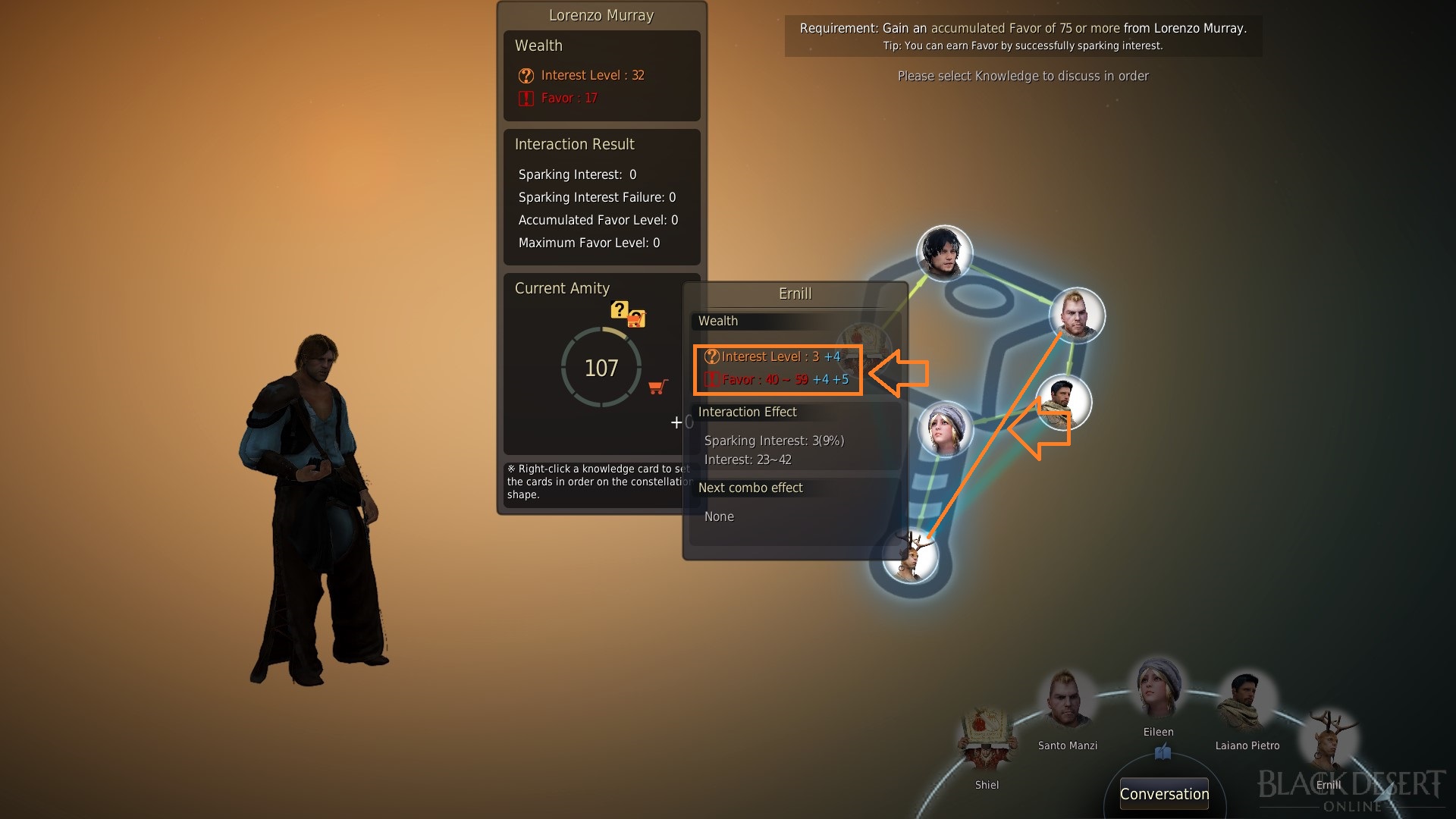 NPC stores may have some items which say “Required Amity”. Once you have the amount of amity you will be able to buy these items for the price shown. Amity points with that NPC will also be consumed when you buy the item. If the NPC does not run a store, they may offer you a rare item, provide a new quest, or give you new knowledge.

In the screenshot below you can see that I can now buy 3 new items which were previously grayed out. These are the “Shabby Leather Saddle”, “Weak Iron Horseshoe” and “Shabby Hide Stirrups”. You can see how much required amity these cost under the name of the item. Each of these cost 100 amity points. The “Shabby Leather Barding” and “White Plume Champron” are still unavailable because they require 300 amity and I only have 140 at the moment. 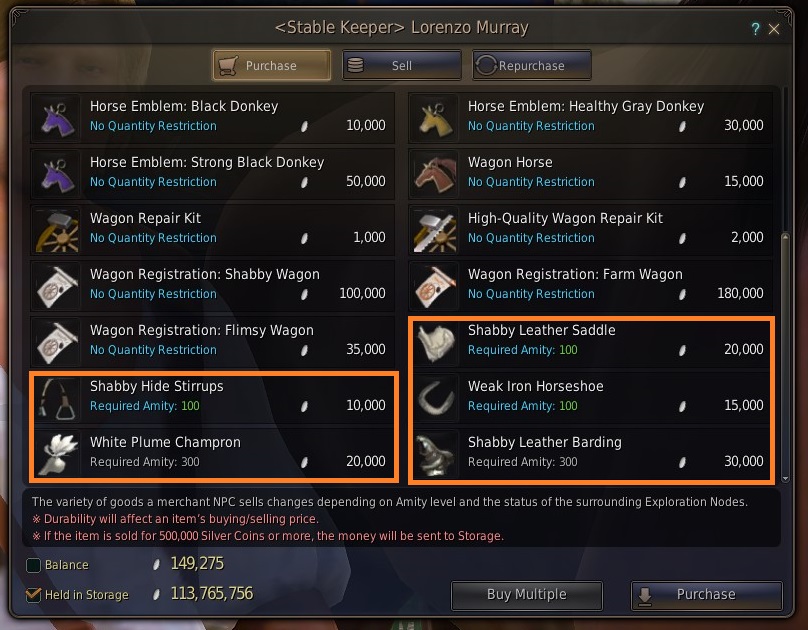 Investing in the node will also help you to gain amity on NPCs in that area and matching the same Zodiac sign as the NPC will increase amity gain by 10%.

You can also use equipment/buffs to increase your amity gain when using Conversations:

In each region (Balenos, Serendia, Mediah, Valencia, Kamaslyvia, etc.) you have a Region Fame Level between 1 to 5. This is calculated by adding up all of your amity with each NPC within the region. You will also recieve an AP bonus based on your highest Region Fame Level, which is added to both your pre-awakening and awakening AP. This means you can get Region Fame Level 5 in just one region and you will get the highest available AP bonus.

To check your current Region Fame Level, open your world map (M) and mouse over the Territory emblem to view the Territory Information. Your Fame level will be shown in your Player Information section. 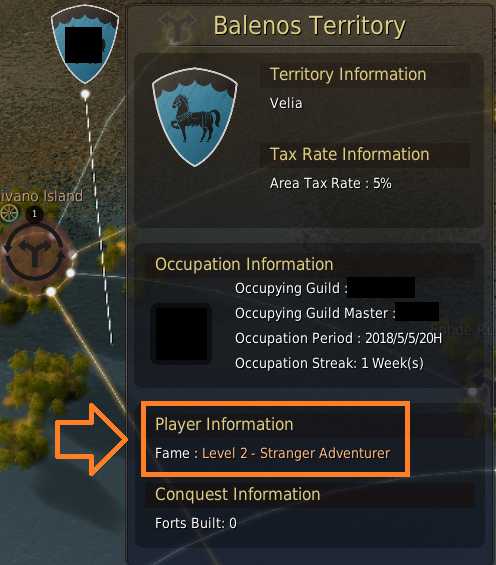