Black desert is a massive world with a huge amount of depth. There have been times where I’ve been completely blown away with some of the features in the game. Its simply the best MMO I have played and its all I’ve ever wanted from a sandbox and more. Below are some of my favorites things about Black Desert. I hope you learn something new and enjoy this article.

10. Parkour and the ability to role play.

Black Desert offers something that you won’t find in any other MMO, the ability to actually climb through the world. You can climb over fences or over buildings, instead of running all the way around. It kind of makes you feel like you’re playing Assassin’s Creed. You may find secret treasure boxes or just a fantastic view. Personally, my favorite place in the game is the very top of the highest building in Calpheon city. You’ll often see a dragon flying around and your heart beats so fast when you see yourself slip near the edge. Trust me, this is something that everyone should do at least once in this game. There is also a gigantic bridge named Elder Bridge which has a beautiful view, and you can sit on the very edge with your feet dangling off.

Another great part of BDO is it’s ability to role play. You can sit or lean on pretty much anything as long as it’s the right height. This might be a bench, barrel, or a small wall. Whilst leaning or sitting down you may notice some NPCs chatting about something secretive, and you can actually eavesdrop on their conversation. You can also crouch or crawl along the floor, which is great for ambushing your enemy. But if you’re looking to be a little more friendly, there is a long list of emotes. 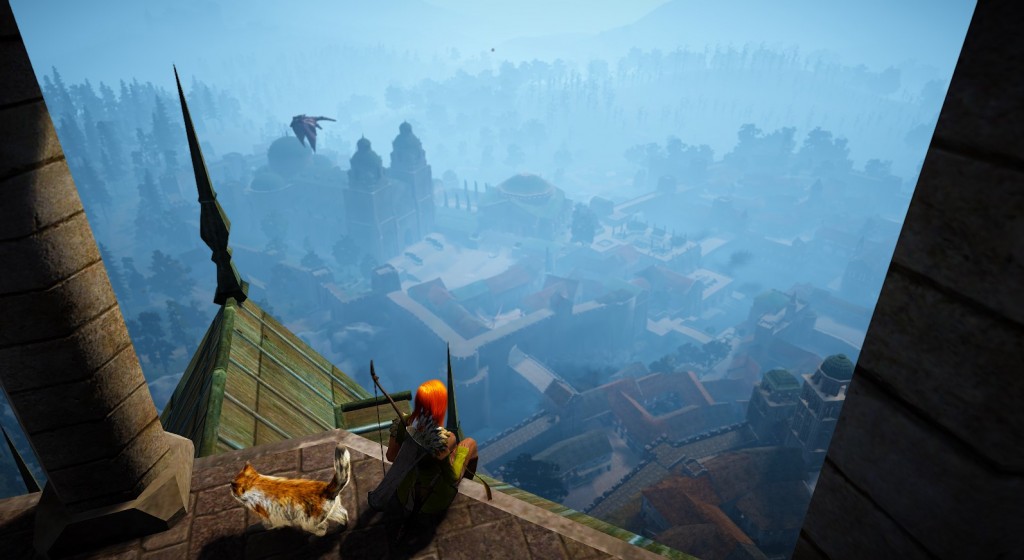 9. The people behind the game

If you’ve ever played Korea BDO you will agree with me 100%, that Pearl Abyss, development team, surely have a rocket up there butts. The pace of which quality content comes out is faster than I’ve ever seen in any other game, they really care about the game they are making. For example: the role playing community asked for a walk feature and a few weeks later it was placed into the game. DAUM EU and Pearl Abyss are just as awesome. The publisher team is constantly on Twitch TV, on the forums answering questions and working hard to make this a game our region wants.

Unlike any other MMO I’ve played, the Black Desert world is alive. You get a sense that every NPC in a town has its own task to do and its all very convincing. NPCs might actually wander off from their usual spot to go talk to another NPC, and you’ll often find yourself interrupting a heated debate or learn something about the NPCs personal life, which you did not what to know. If you accidentally bump into an NPC whilst running past them, they will actually move as if you bumped their shoulder, and give you a dirty look as you run past. When you send your workers to do their jobs, they can actually be seen moving to the objective and working there. The hunting zones actually feel like they’re alive as monsters, and are not just randomly placed, sat around waiting to be attacked. Good horses are not just sold by a stable master, you actually have to go out into the world and tame them then breed them.

In Black Desert, your relationship with an NPC actually effects the way in which they interact with you. You can gain Amity points at each NPC separately, by greeting them or participating in the Story Exchange mini-game. Amity points are then used to unlock special items from their shop, obtain gifts from the NPC, gain additional knowledge, or accept rare quests. The Story Exchange mini-game can be quite complex, so I’m not going to touch on it too much, but you must use different conversation topics to increase the NPCs interest or favor, and gain Amity points. Each time you have a new goal and you may also chain some topics to get extra points. Your zodiac sign, which you choose at the beginning of the game, also effects your relationships with different NPCs.

Besides Amity points, you can also steal from NPCs to take something out of their pockets. For example: stealing from a fish merchant may give you a type of fish. However, this will reduce your karma and if you are caught you may have guards chasing after you, as well as decreasing your Amity points with that particular NPC. 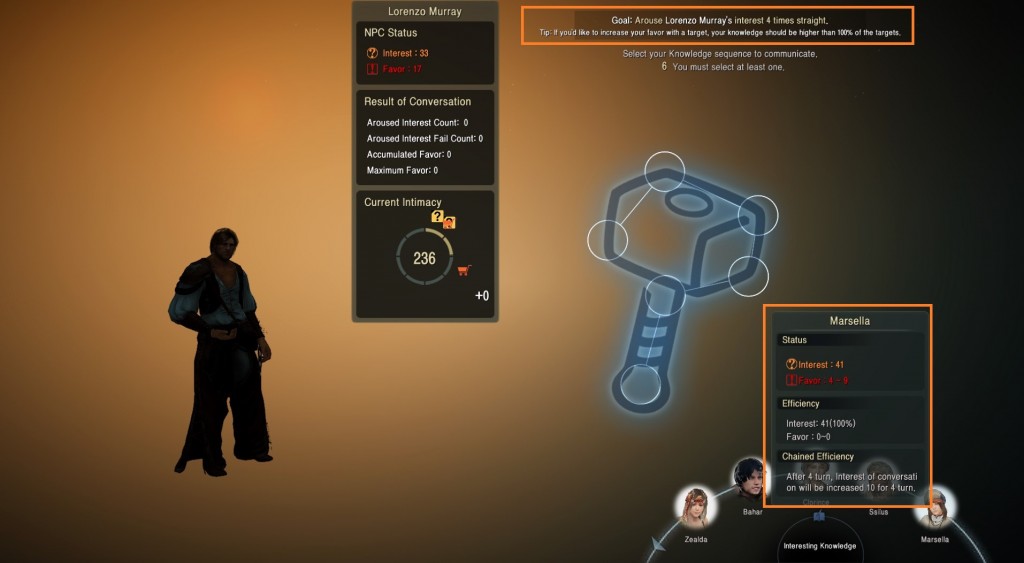 Knowledge is obtained by killing monsters, speaking to NPCs, discovering new areas, etc. When killing new monsters, it is completely random when you will receive knowledge of them. Once you have knowledge, you will be able to see the monsters health bar, and will be given a grade from C to S. The higher the grade, the better benefits you have for that monster type. This may be more defense against them, more damage dealt to them, or higher drop amounts from them. This system is not only another unique part of the game, which you will not find in other MMOs, but a very realistic feature, since you have to kill the monster, before learning about their weaknesses. With this system in place, grinding in certain areas is much more efficient. If you obtain a rank you are not happy with you can reset your knowledge at the NPC “Annalisa” in Calpheon Library. It’s also important to note that you can not level up your grade by killing more monsters. The only way to obtain a better grade is by resetting your knowledge.

Black Desert has different weather conditions, which actually effect how your character looks or how they act. When it’s hot, your character will actually start to sweat. If you decide to go for a swim, or if it starts raining, your character will get wet. You may also notice that you do less damage when it’s raining, and move slower. There are random thunder storms where it goes pitch black and you require a lantern to see your surroundings. The day/night cycle takes 4 hours and between 10PM and 7AM in-game, monsters become harder to kill but will give you more experience.

The Valencia update will include the new desert region. In this region, there are random sand storms which can be deadly for an unprepared adventurer. You must always take a tent with you to shield yourself from the desert weather. Whilst in the desert you can also suffer from heat stroke in the day, or hypothermia at night, and must drink tea to heat yourself up, or purified water to cool yourself down. This feature alone turns a sandbox MMO into a survival game.

The character creation tool in this game is mind blowing. You can make exactly what you want whether that be your favorite game character or a celebrity you like. The amount of features you can change is amazing. You can have change anything you like, such as every facial feature imaginable, even strands of hair! There are three changeable parts for the hair color, allowing you to choose separate colors for the main hair, roots and highlights. You can make every color imaginable. There are also tons of options for creating the eyes, and you can make your right eye look totally different from the left. At first you will probably find yourself getting lost in the character creation and spending many hours trying to make your perfect character.

The guild system in Black Desert is yet again, so unique. Members actually have to sign a contract when they join a guild and are paid a salary each day, out of the guild funds. There are various guild quests and skills which help you form the type of guild you want to be, this might be a trading guild, crafting guild, gathering guild, etc. There are also guild houses which can be used to craft items or expand the guild warehouse storage. When siege elephants are added, this is where you’ll be able to train your captured baby elephants, ready for battle.

I am a huge fan of guild focused PvP where the victors takes a territory. Castle sieges are an epic server wide event any guild can take part in as long as they have a tower built in the territory. There are also various bombs and traps your guild can create especially for the war. The amount of planning guilds put into this is crazy, and it will only get more ludicrous when siege elephants are in the game.

Black desert is a beautiful game and it’s safe to say that I haven’t seen a better looking MMO. While it is a very demanding game to run at maximized graphics, it is very forgiving when it comes to optimizing to run on lower end systems. There are a couple draw backs to the stunning graphics, such as popping in textures. But you will find it easy to look past them once you see the game for all its beauty. Pearl Abyss, developed their own graphics engine from scratch. Due to this, Black Desert has so much graphic detail and is designed specifically for Black Desert. The shadows are very realistic, as well as the detail put into the water. It won’t take you 10 seconds of playing the game to appreciate it’s beauty and the love and care put into it. After months and months of playing, you do eventually take this for granted. But just a couple screenshots of other MMOs, will quickly remind you just how amazing the graphics are in Black Desert.

I also feel like I must talk about the screenshot mode. You can enter screenshot mode and hide the UI completely. Then change the screenshot color filters to turn your screen black and white, warm, cool, vintage, cinematic, etc. You can also completely change the positioning of the camera, including the angle, or adjusting the blur. In addition, you can easily take an alpha mask version of the screenshot, which is often used for cutting out characters in Photoshop.

My number one favorite thing about Black Desert is the combat system. Combat in Black Desert is smooth and fluid. It has the best combat in any MMO I’ve ever seen. The combat system is similar to the combat system in TERA but it takes it either further by introducing keystroke combos for each skill. Most people compare the combat to Vindictus.  For example, one skill combo might be: S + Right-click + A + Left-Click. The combos themselves can get really complex but they are easy to memorize and make the combat feel so much more realistic and fluid. It feels like you are completely in control of the character and eventually your muscle memory will take over and you’ll find yourself pressing the buttons without even thinking about it.

Everything is so fast paced and each class has their own unique style. For example, the Berserker class uses their unique size to overwhelm their enemies, grabbing them and throwing them around. Compare that to the Tamer class, a young girl who specializes in martial arts, and uses her pet the “beast” to do all of the hard work. She can ride, attack and command her beast, whilst using her Katana to slice through her enemy.

So that’s it for my top 10 things about Black Desert Online.