Family Fame is a system which was added to the game on Jan 18th 2017. Family Fame is shared across all characters on your account and gives you a higher daily payout depending on the amount of points you have under each section.

There are 4 types of Fame points:

You can view your current fame points under your character info (P). 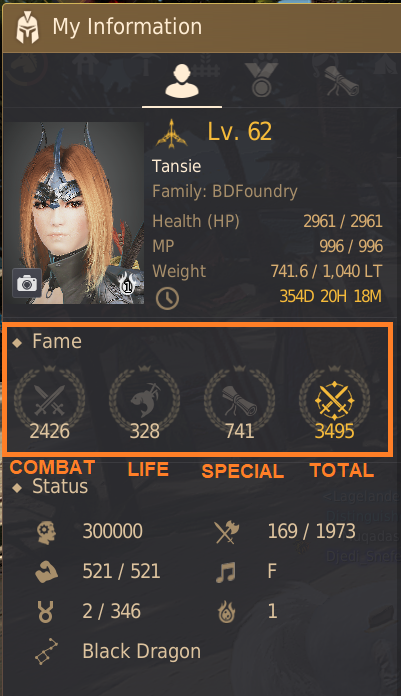 Once your total Family Fame is over 1,000 points you can get a silver tax reduction on all sales you collect from the central market.

Each day you will get a Family Fame Payout. This is a set amount of silver which will go to your Black Spirit’s Safe each day at 00:00 UTC when server resets. The amount of Family Fame Payout you get depends on your Combat Fame, Life Fame and Special Fame.

Combat Fame is calculated by combining the levels of all your characters:

This means that it’s important to get as many characters to level 60 or 61 to increase your combat fame. Level 61 can be easily obtained now by questing using the Chenga Tome. I recommend checking out this youtube video guide for more information.

Characters between level 15 and 55 can also claim a daily combat XP buff that lasts for 60 minutes. The higher your combat fame is, the higher % the EXP buff will be. The buff can be found in your Challenge rewards (Y) and resets daily at 00:00 UTC.

Life Fame is calculated by using all the life skill levels of all your characters:

To increase your Life Fame I recommend doing cooking and alchemy on your alts for a while to reach professional 1. Processing flax threads also gives a decent amount of EXP and you can quickly burn enery and gathering water at a river for gathering EXP.

Calculating your Life Fame can become confusing so I recommend using this Fame Score Calculator.

Special Fame is calculated by dividing your total gained knowledge by 10, then adding your contribution points.

You can view your total gained knowledge by pressing (H). 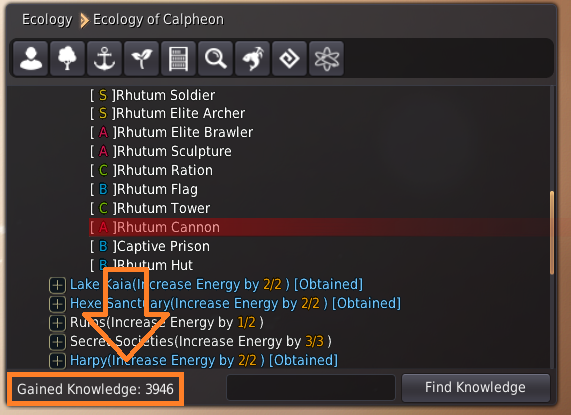