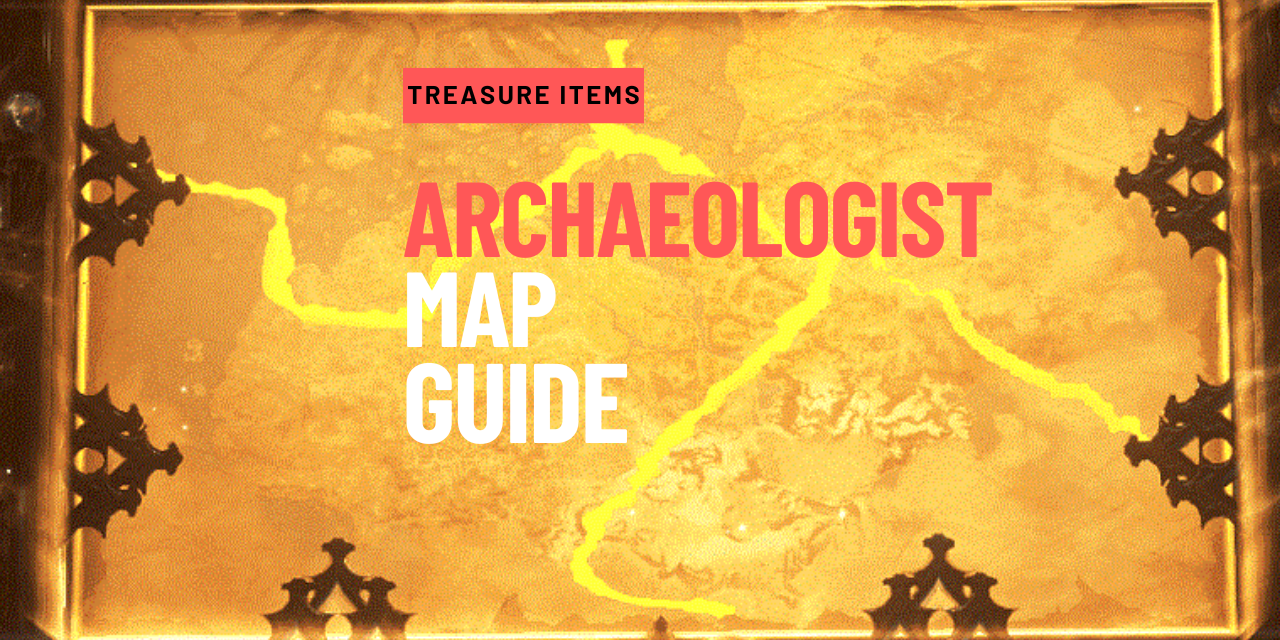 The Archaeologist’s Map is a very rare treasure to collect. It requires you to grind monsters to collect 4 rare items to craft it and can take hundreds if not thousands of hours to acquire all three pieces so just be aware that this is not something you should expect to get quickly if you do decide to go for it. It’s also recommended to use Item Drop Rate increase buffs as much as possible to increase your chances and try to make the grind a little faster.

The Archaeologist’s Map allows you to teleport to any town and back to your location. Simply right-click the item to use it.

The Archaeologist’s Map requires the following items to create it: How to identify the Map Pieces

When the parts drop, they all have the exact same name and icon:

This can be frustrating because in each grind spot, two different pieces can drop and you won’t know which one you have unless you check your system chat to see which mob it dropped from.

You can identify the parts by taking them to the Caphras’ Journal at the Caphras Cave node near Florin. The Caphras’ Journal can be a little hard to find so refer to the images below for help.

Once you get to the Node Manager in Caphras Cave, follow the left path going down into the cave. Keep following until you reach the bottom of the cave where there is a pit in the middle called the “Caphras’ Seal”. On the right of the seal, there is a doorway that you must hit to destroy and enter the secret part of the cave. After entering the secret part of the cave, you can find the Caphras’ Journal on the table in the middle of the room. Interact with the book and choose the “Exchange” option to identify any map pieces you have. This will change their name and icon, allowing you to distinguish which piece you have. Roud Sulphur Mine is where you can obtain two of the pieces for the map. Roud Sulphur Mine is a fairly easy grind spot for level 58+ and has a recommended AP of 210 and 250 DP. In this grinding spot you do NOT get the desert disease and there is a Villa nearby which also has a daily quest to kill monsters at Roud Sulfur Works.

The first piece can be obtained by killing the “Lava Tukar” mob only. It has a 0.003% chance of dropping.

The second piece can be obtained by killing the “Lava Devourer” mob only. It has a 0.002% chance of dropping. Pila Ku Jail is where you can obtain the other two pieces for the map. Pila Ku Jail is a slightly harder grind spot for level 58+ and has a recommended AP of 230 and 290 DP. In this grinding spot, you do NOT get the desert disease and there is a Villa located just north of Pila Ku Jail, which also has a daily quest to kill monsters there.

The first piece can be obtained by killing the “Iron Fist Warder” mob only. It has a 0.0025% chance of dropping.

The second piece can be obtained by killing the “Sordid Deportee” mob only. It has a 0.005% chance of dropping. I would recommend grinding at the “11 Sordid Deportee” rotation (check the video below) because the Sordid Deportee drops the rarer treasure piece out of the two, and this is the best rotation with the most Deportee monsters in it. Make sure you also kill the Iron Fist Warders in the rotation as well, it is likely you will get the Warder piece first here, but if not you can easily find videos for the best Warder rotations as well.

You also require 4 gems to craft the Archaeologist’s Map. These can either be processed by yourself, or you can buy them from the central market. They are usually in stock.

If you would like to craft them yourself you need to press [L] to open the Processing window, then select the Shaking option. You also need Shaking: Skilled knowledge to craft these, which you can unlock at Processing Artisan 1. Use the recipes below to craft:

During the “Treasure Event” only, the treasure item pieces can also drop at additional grind spots.

After completing your Archaeologist’s Map, you can acquire an exclusive furniture item and title.