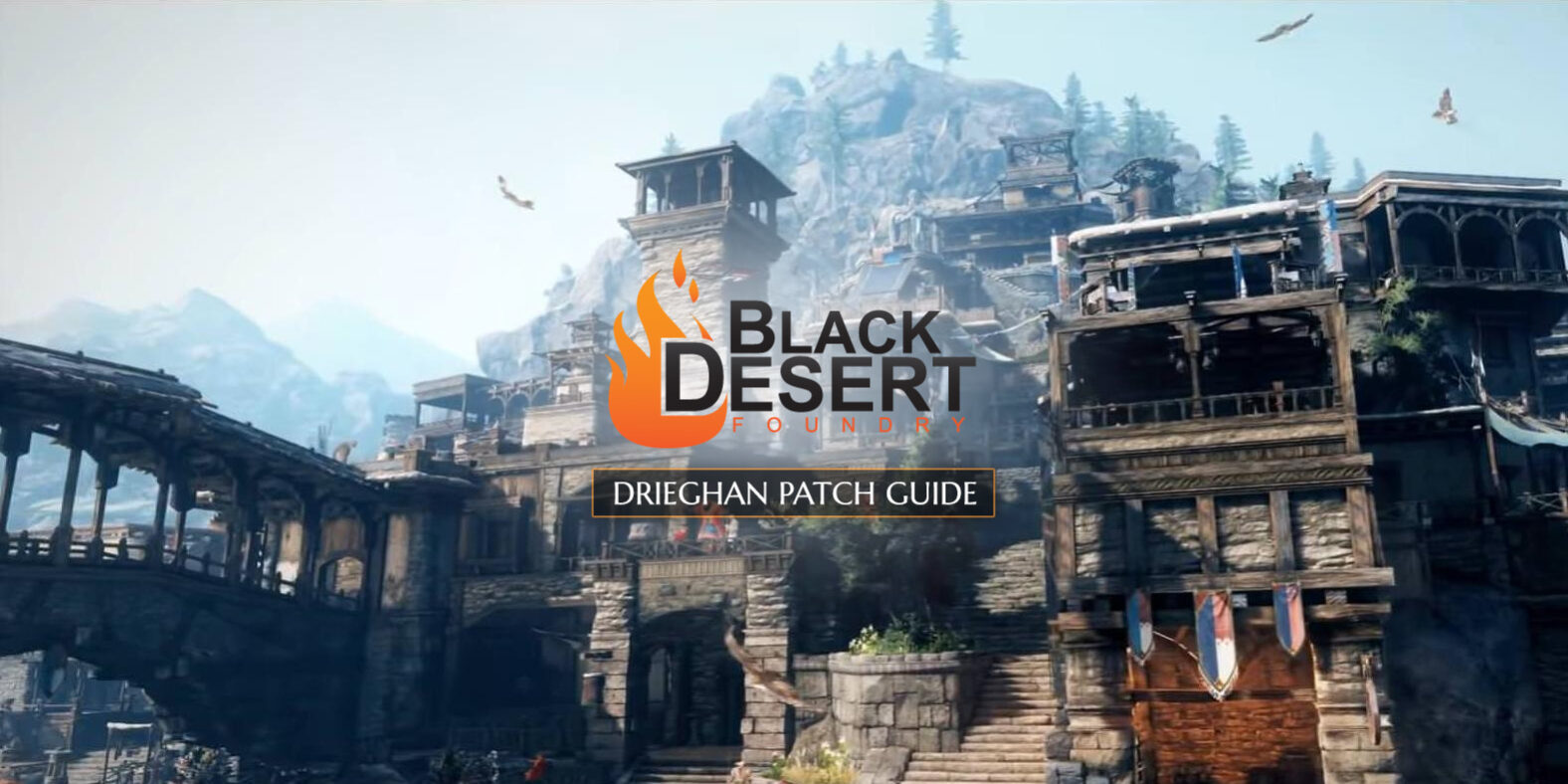 To do the Drieghan story quest you must have completed the Kamaslyvia Part 2 questline.

Below is the map of Drieghan and all of it’s node connections. Drieghan is a mountainous territory and is the ancestral home of the dwarves and giants. However, the dwarves were expelled by the giants who rebelled against them and now the giants occupy Drieghan whilst the Dwarves currently live all around the world with the humans. Dragons have also been spotted all around Drieghan, including Kamos the red dragon. Drieghan is situated south of Serendia, southwest of Mediah, and east of Kamasylvia. 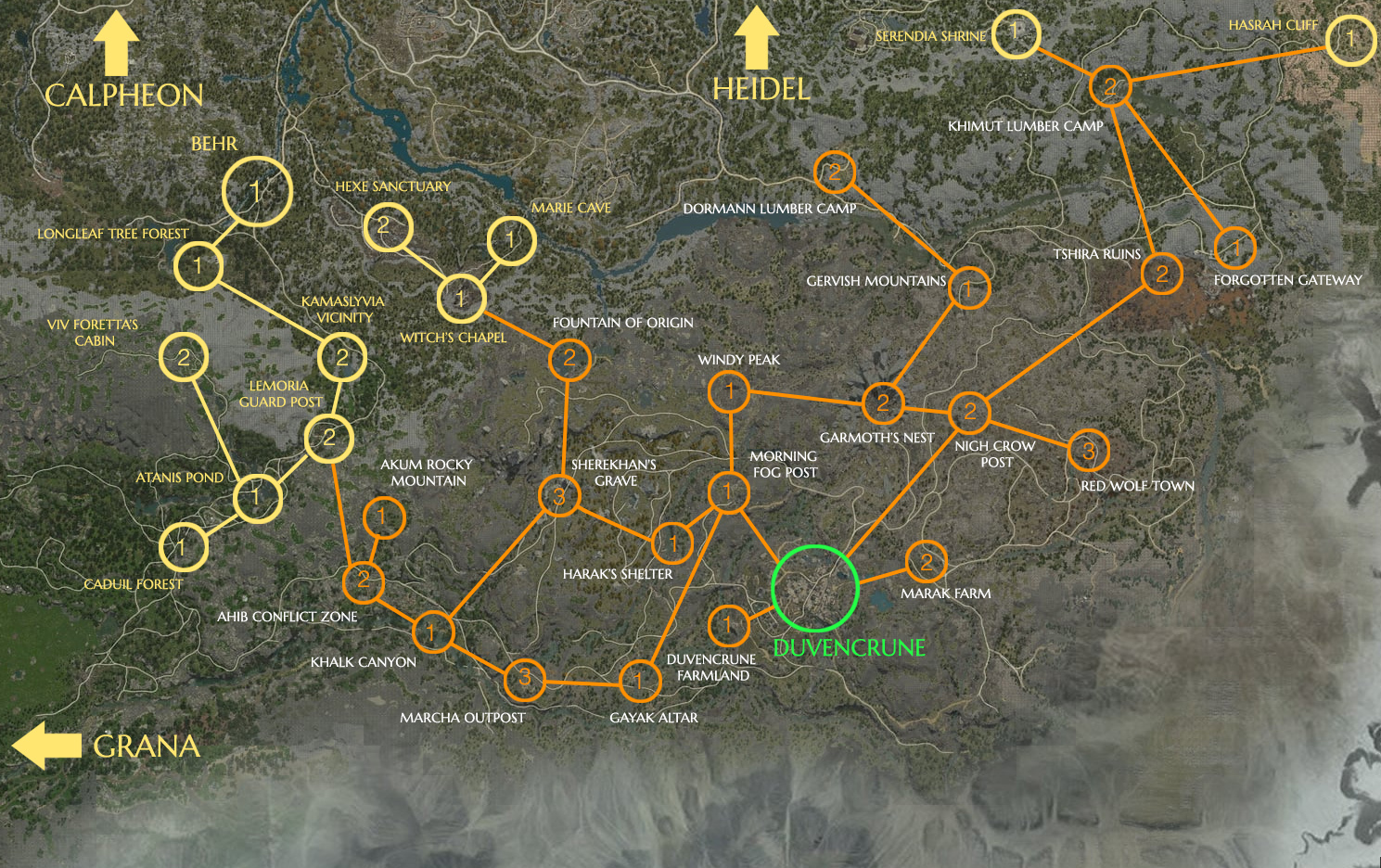 A new craftable Awakening weapon called the “Dragon Slayer” has been added. The weapon can be crafted in Duvencrune house 5, which is in the capitol city of Dreighan. The materials for the Dragon Slayer must be crafted or obtained from monsters and quests specifically in Drieghan as well.

The new weapon’s AP is almost identical to a Dandelion weapon and also has a+5 additional damage to humans item effect. To restore it’s maximum durability, you can also choose to use Memory Fragments or a new item called “Refined Remains of Black Energy” which is used to craft the weapon and drops from all monsters in Drieghan.

New crystals sockets have been added that can be put in all gear. Putting more than one of the same crystal in your gear will give you a powerful set effect. You can also enhance the crystals for additional item effects using Kamos Scales, which can only be obtained from the new world boss “Kamos”.

Other crystals have been added as well which requires an item drop from Red Wolf Town monsters.

New accessories have been added which drop from different grinding zones in Dreighan.

New recipes have been added which require materials from Drieghan.

When you attempt to collect Lakhairo, a new gathering mini-game will begin!

The goal of the mini game is to dig around the Lakhairo and remove it without damaging it’s roots or hitting the stones. The number of roots, dirt and stones remaining is shown in the mini game window. You can choose to dig deeply with LMB, or dig slowly and more cautiously with RMB to reveal what might be under the soil. But the amount of times you can dig slowly is limited and depends on the enhancement level of your Hoe. The hoe starts off with 10 RMB clicks and will increase by +1 per enhancement level, once you reach enhancement level +10 or higher.
The rewards you get from the mini-game completely depends on how much damage you do to the Lakhairo roots. The maximum reward you can get is an item equivalent to 10 million silver. There is an NPC in Dreighan which will give you a tutorial for themini-game as well.

You do not need to have durability on your hoe to gather a Lakhairo, but it’s enhancement effects (amount of RMB clicks) will not take effect during the mini-game. 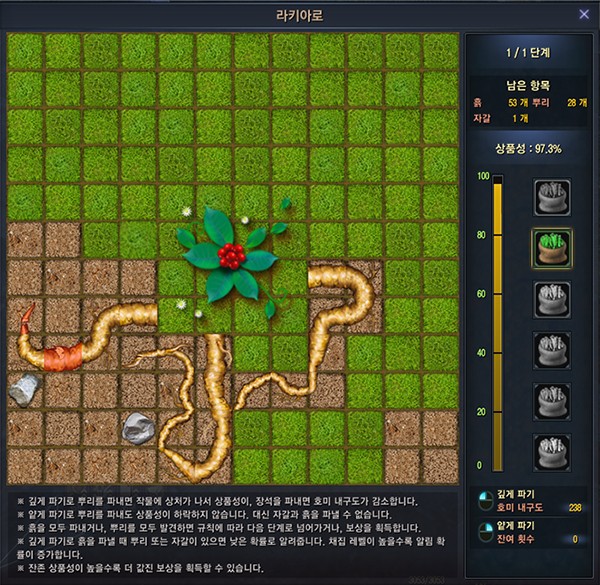 Three new grinding zones have been added with Drieghan which are designed to be different difficulties, with some being solo grinding spots and others for a party. Black Energy Residue can drop from all 3 grinding zones and have a much higher chance of dropping than in other areas (such as Mediah/Valencia).

Marni Stones have also been added for each new area for levels 58 – 61.

Tshira Ruins is designed to be the same sort of difficulty as Crescent Shrine and I recommend level 58 with 170AP/220DP or higher to grind here safely. Gatekeepers will also spawn here which are far more difficult.

This grind spot is the same sort of difficulty as Basilisk Den. I would recommend at least level 58 with 180AP/230DP or higher to grind here. There are jails around this grind spot and an elite monster will be summoned if all jails are destroyed.

The yellow grade belt that drops here can also be created by combining two of the Orkinad Sculpture loot items (Leather Knot and Metal Ornament) in a [-] shape.

The new world boss “Garmoth the Red Dragon” will spawn every Tuesday, Thursday and Saturday in every channel, except Olvia and Arsha channels. When the world notification pops up, Garmoth statues and additional mobs will be summoned and must be destroyed during the fight.

Garmoth will not drop any legendary (yellow) grade gear, but will instead give you materials used to enhance your other items.

The new item “Garmoth’s Heart” can be processed using Processing (L) > Heating to create a “Inverted Heart of Garmoth”. You will also need a “Inverted Energy” which is obtained through a quest in Drieghan. An Inverted Heart of Garmoth is used to reform Nouver/Kutum off-hands and turn them into a Fiery” Nouver/Kutum. It has a 100% success rate and will put additional item effects onto your Nouver/Kutum. These stats are: Max HP +150, Max Stamina +100 and Special Attack Evasion +10%.

Other loot includes Garmoth Scales, which are used to craft new crystals. Finally, a new item called “Dragon Egg Fossil” can drop from Garmoth that can hatch into a pet (Young Crimson Dragon) by pressing RMB. The Young Crimson Dragon will have one of the following special skills:
Heatstroke/Hypothermia Resistance, Hostility Detection, Auto-fishing time reduced, Taunt Monsters, or Finds Named Monsters.

The dragon pet also has a Max HP +25 talent and acts like a normal pet. 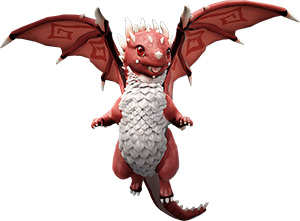