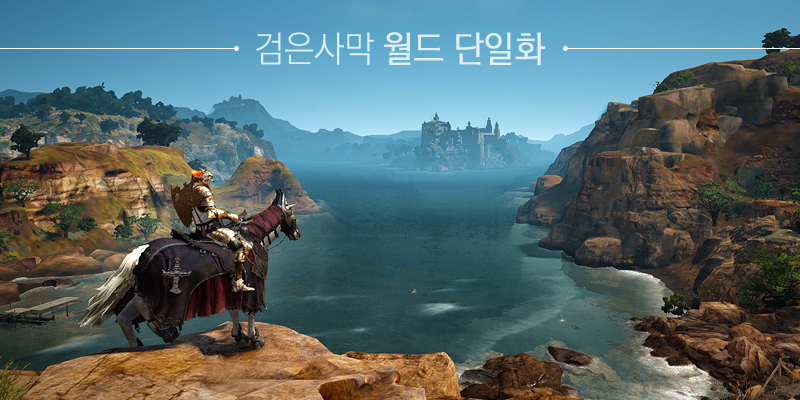 During July we are merging the world of Black Desert into one server! Refer to the information below for all the details.

Once the servers are merged, we will be shortly releasing Valencia!

Click here to view our gallery of Valencia Screenshots

(Please note that not everything in this post may be 100% accurate. Some information may be lost in translation. If you find any errors leave a comment and we will update the post as soon as possible.)

■ When is the server merge taking place?

Tues, July 7th: Heidelberg (하이델) primarily servers and the Kane flan (케플란)  server will be merged by this date.

Tues July 14th: The rest of the servers will be integrated and merged into one world by this date.

Check the calendar below for more information:

■  How many channels will there be?

■  There are multiple characters on multiple servers. Are they all preserved?

Characters will be preserved.

■ At the moment you can have 15 characters across all servers, what happens when the servers are merged?

It holds all of the characters available and you can play them, but you can not create new characters.

To create a new character, you must have enough room from the default character slot (3) + expansion slots bought.

■ How does the server-specific challenge and reward progress?

If the challenge is completed before the server merge the rewards will still be given.

If each server has the same challenges, other steps if you have completed all of the compensation will be received before the server merge.

Can you level up your character on the Calpheon server, after the server merge, to receive levels achieved challenges rewards?

The challenge is based on the character with a higher level.

Therefore, the rewards of each character in the challenge will depend on the highest level.

Overall, will this be 1000 hours? I the time challenge reward, right?

Play time will be merged when the servers are merged. So yes, this is correct.

■  How will NPC Familiarity work?

Familiarity of server-specific NPC are all combined.

■  If I get a title on one server will it be available to all characters after the merge?

If the title is server-specific it will only be available on the characters it was achieved on before the merge.

■ What happens to Knowledge?

■  What happens to the total contribution points?

The contribution is recorded based on the character of the last server log out.

Contributions obtained from other servers are added to the server, merged in terms of contribution to the experience.

■  What happens to nodes I invest in?

Contribution points spent on nodes and buildings will returned.

■  What about the energy spent on investing in nodes?

The energy consumption on node investments will not be returned.

Since the last logout information based on the character of a server application, please be sure to log out of the last character to be the norm.

■  What happens to disposable items such as wallpaper when the houses are reset?

Home items, including wallpaper and floor installation are all moving to the warehouse of each village.

■  What happens to workers?

Workers for each server appears as a unified list once merged.

■  What about if I have more workers than I need after the server merge?

If the number of workers is more than necessary, workers must be sold through the stock exchange.

■  What happens after the workers are merged into one task list?

World unify workers around the production is temporarily suspended.

The mass was in progress just part of the materials used in production are paid based on 1.5 times the upper limit of the amount of an item exchange.

■ What happens to approval ratings?

Approval ratings are combined across all servers that existed in terms of experience.

■ Will there a change in Mileage and Pearl Store items?

Pearl store and Mileage items will be the same after the server merge.

■  When you are using all of the Value Package in more than one server, unified What happens after the World?

All Value Package being applied within the account will be applied to the remaining duration of use combined.

In addition, based on the sum check and start time will be extended by the time the check on the day progressed.

Pearl holds for each server, or both combined mileage will be.

Therefore, the above cases, a total of 415 World Pearl is owned and merged to one server.

■ What happens to pets?

Pets are all held by server consolidation exposed to one unified list and the World.

■  What are the items that are in a warehouse of more than one server?

Warehouse items of two servers will be merged into a single warehouse.

The Warehouse will temporarily expand to hold all of the items. You cannot add more items when the Warehouse is expanded but you can remove the items.

In addition, items are out of the primary server first, the item will be attaches to the bottom of the remaining servers.

■  Do you have items that do not move up or wear of the item in the bag?

By default, all items are moved.

However, the last log out of a server other than the one character on the server  if the contribution items can not be moved.

In addition, because in terms of contribution to experience all contributions will be deleted item.

■ You can place a maximum of 30 items on the item exchange, what happens if this is exceeded?

Including all sales proceeds in excess of the normal entry is shown in the exchange.

■  Will horse breeding and horse market be reset?

Horse breeding and market will proceed as usual after the server merge.

■  What happens after the town market or breeding unified world market?

Water on board enrolled in the town market or breeding market will remain unified after World.

■  The workers are the workers registered in the Market Does not disappear or cancel after the World unified?

The workers registered with the workers after the World market will remain unified.

■ What is the item or character progression are being transported?

World unify all proceeds will be applied to arrive after state.

■  What happens to Guild contracts?

Finally, it applies most former unified world based on the character information in the log out of the server.

If you do not join a guild character logs out of the last one unified server after the subscription is devoid of the guild.

■  I am in a large guild on one server and the leader of a small guild on another server.

What happens after the server merge?

Since the unifying of the world if this guild the guild boss will be gone also.

■  What happens to letter in my Mailbox?

Mailboxes across all servers will be merged.

Friends List will be merged. It will hold up to 50 friends.

The chat block list will be reset after the server merge.

■ What happens to my gardens on each server?

Information is maintained and as a character reference of the last server log out.

Garden held by other servers on the basis of the planted crop  seeds and fences items are stored in the warehouse.

However, the fence rentals are added and then unification with the contribution in terms of contribution to the experience.

In addition to the FAQ above, if you have any questions feel free to contact us using  Customer Service 1:01 inquiry