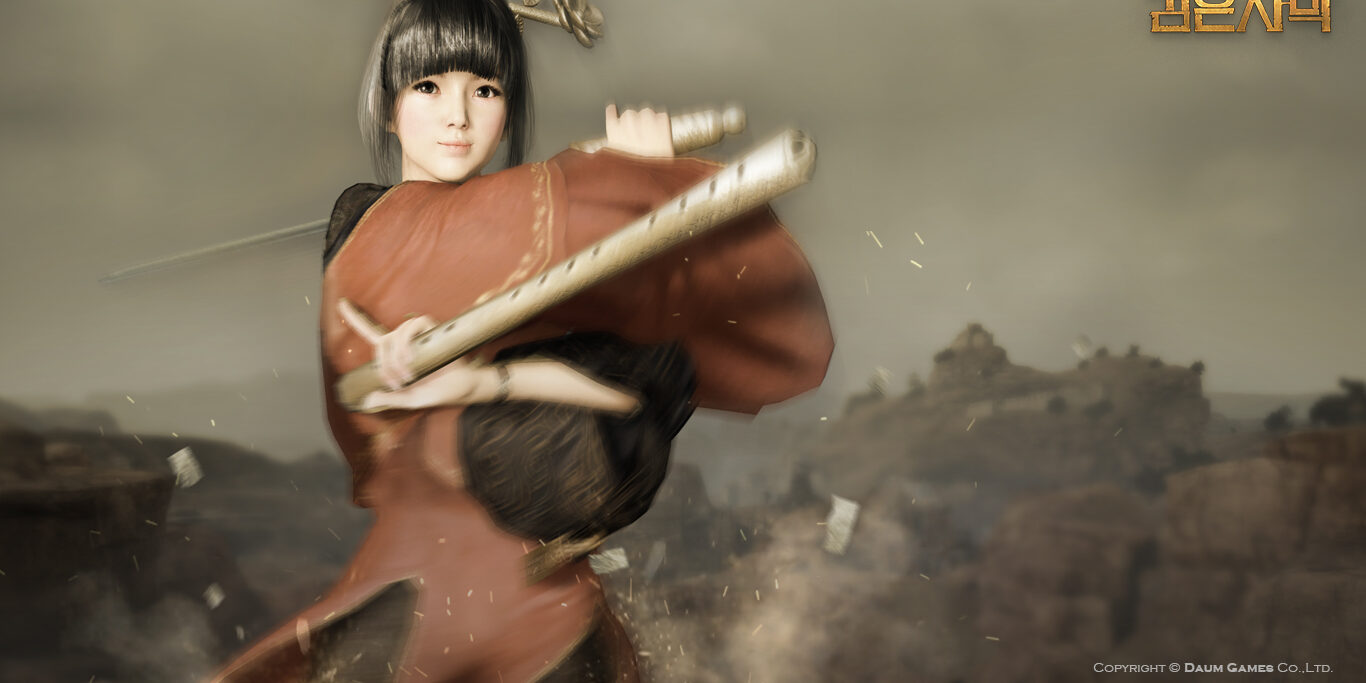 We are delighted to introduce our first PM (Project Manager) diary. As mentioned in my interview last week, we plan on sharing details that are either already set as-is or are currently planned for the CBT 1 in December.

We would like to open the first PM Diary with a big bang. We have listened to your feedback and we are happy to announce that we will offer you the Tamer class not only at launch, but even as playable character in our CBT 1!

Check out her introduction video >>here<<.

The unique costume and weapon skin from the Pre-Order Package will also be available for this class at launch!

I previously announced that we would run the CBT 1 for 4 days, starting on a Thursday at 7 a.m. UTC and ending on the following Monday at 7 a.m. UTC. However, since we’ll have the first version of our final localized English client ready (text only, Voice Overs will come at the subsequent stage) and also based on some of the feedback received in the forum, we have decided to extend our CBT 1 stage by 2 more days. The CBT 1 is planned to take place as follows below:

There were plenty of changes that were requested and pointed out in your Alpha feedback reports.

As many role-players hinted that they would like to see features such as ‘walking’ and ‘darker nights’, we can now say that this will be all available at CBT 1. When the night cycle kicks in with clouds moving in front of the moon, you will require the use of lanterns, which you can purchase from NPCs. The developers are also working on a ‘craft-able’ version of the lanterns, including oil that will allow you to extend their use. As you might have noticed, the ‘walking’ feature has now been added to the Korean version.  You do have to keep the CAPS LOCK button pressed, but developers are looking into the possibility of this feature being switched ON/OFF with the CAPS LOCK button. 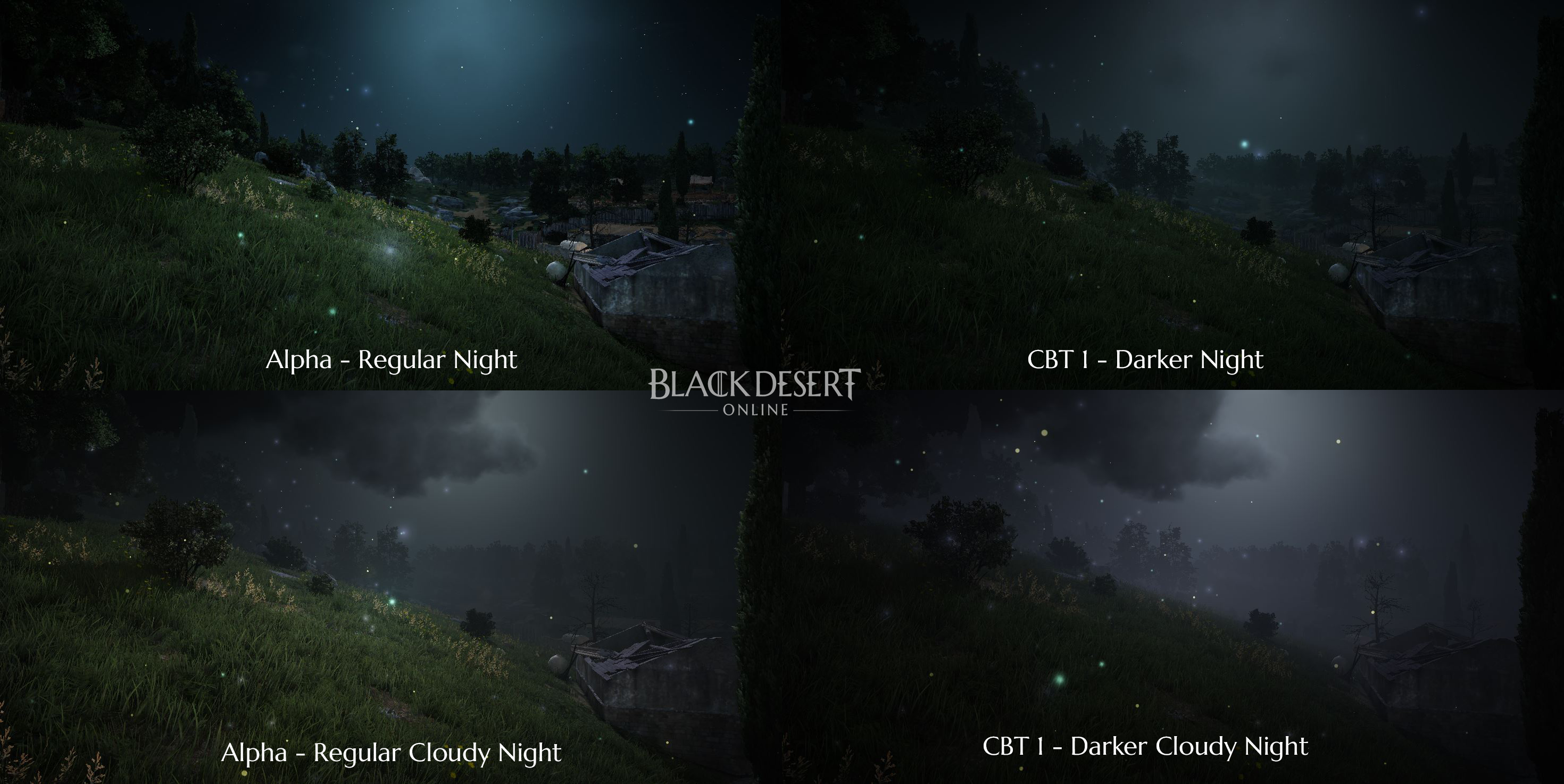 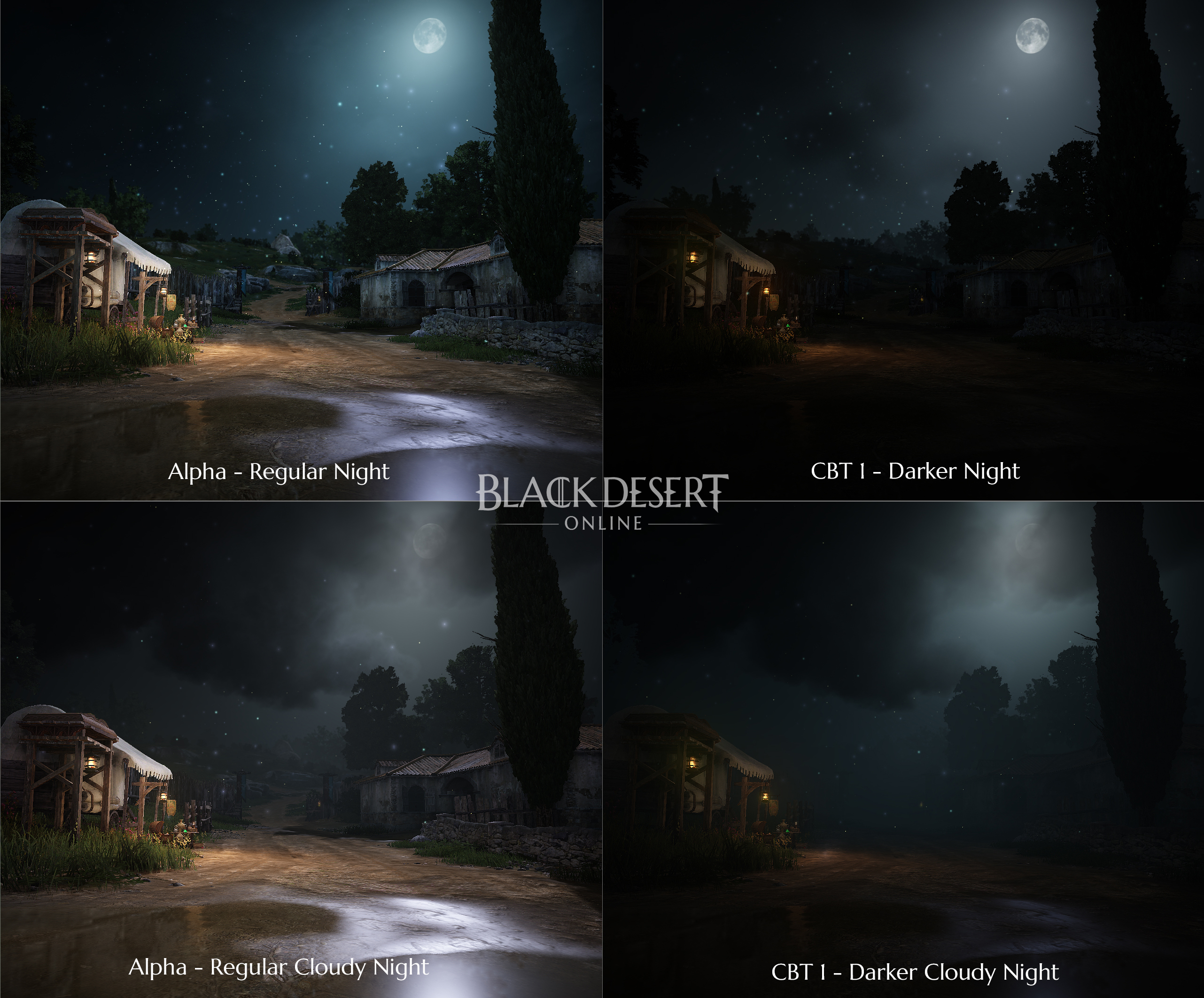 Video: Walking
The max level for CBT will be 50.99% and the PvP level requirement has been increased from level 20 to level 30. The reason for this is to give everyone a chance to actually develop their characters first, before enabling PvP. Speaking of PvP, a lot of the Alpha feedback received was pointing at the potion spamming in early PvP. Therefore, we have decided to increase the cooldown time for Red Potions (Health Point Recovery) from 3 to 5 seconds. Additionally, the highest tier potion (Extra Large) has been removed. We haven’t touched the Karma system yet, as we would like to gather more feedback from both parties, PvE and PvP players alike after CBT 1. Additionally, Pearl Abyss is working on rebalancing the Warrior, Berserker, Ranger and Sorceress classes, to make them able to go head-to-head with new classes such as the Wizard, Tamer and all other upcoming classes.

Additional graphic options have been added such as a switch for the NPC hoop UI [default: ON], Guiding Arrows [default: OFF] and the blinking effect for monsters, GVG targets and so forth, can also be switched [default: OFF]. The world map UI has been heavily revamped to make its navigating more convenient. And very good news for myself and all the ‘baldheads’ out there! Finally, we will receive a massive amount of new skins and hair colors, bald haircut and new beard styles for male characters.

Picture: The new World Map UI – the untranslated text is still in progress

The level progression in the original Korean version was rather fast-paced. Currently we are tweaking the level progression, in order to turn down the pace a notch or two and smooth out the leveling curve. This is a process in progress, so it will require more feedback, which we are intending to gather during CBT 1, hence the extended CBT phase.
I did mention in my interview before that we are not going with a Mega Server, but it is still something that we might consider, due to the benefits that would come with it. Before you start worrying, I’d like to provide some more details about what those benefits are. Also please be aware that Pearl Abyss and Daum Games are both very determined to offer the best gaming experience. So our ultimate goal is to secure a stable gameplay.
A Mega Server would mean that we would have 2 Mega Servers. One in NA and one in the EU. Each offering multiple channels, from which you can choose. You would be able to switch with your character between each channel, thus allowing you to play with your friends that are on the same Mega Server (EU or NA).
The ‘regular setup’ would be if there were 2 “World Servers” (EU and NA). Although instead of multiple channels, you would find multiple servers named Calpheon, Balenos, Serendia and so forth, from which, you would have to choose your starting point. The downside is, you won’t be able to switch servers (e.g. Calpehon to Balenos) at any time; unless a merge happens due to a deserting server.
Again, our final decision will be based on what we believe will be the best experience for players, both on technical terms and for pure enjoyment.

As of now, the vigor system has not changed much for CBT 1. We know that due to recent games utilizing a similar system, players are very cautious about such features, so we are planning to share a more detailed description, provided by Pearl Abyss, about the intention behind the vigor system, so that everyone may understand. Nonetheless, please don’t hesitate to share your feelings and opinions about the features available in Black Desert Online at any time.

For CBT 1, we will test a set of items to be tradeable. We will try to share the exact list before CBT 1.
However, the trading system is a very sensitive matter, so we will gather as much feedback as possible during CBT 1 and do our best to find a solution. Please bear in mind that despite the seemingly restrictive trading system, it is deeply interconnected with the game’s design and intentions. Therefore, we would like to ask everyone to take their time whilst evaluating this feature.

Another topic that many of you keep inquiring about, is the cash shop. However, this is still subject to change. Once we have proper information to share, we will do so.

Lastly, the developers have shared that they are and will keep working on adding the current “Scroll Bosses” (Boss monsters who you can summon with scrolls) step by step into open world bosses. This is a process that requires time, so we can’t specify which bosses will be added and during which phase. Additionally we would like to share the first screenshots of the new pet being created for our service and the first drafts of new face presets for some of our classes at launch. Enjoy!
Picture: New Pet First Look – German Shepherd 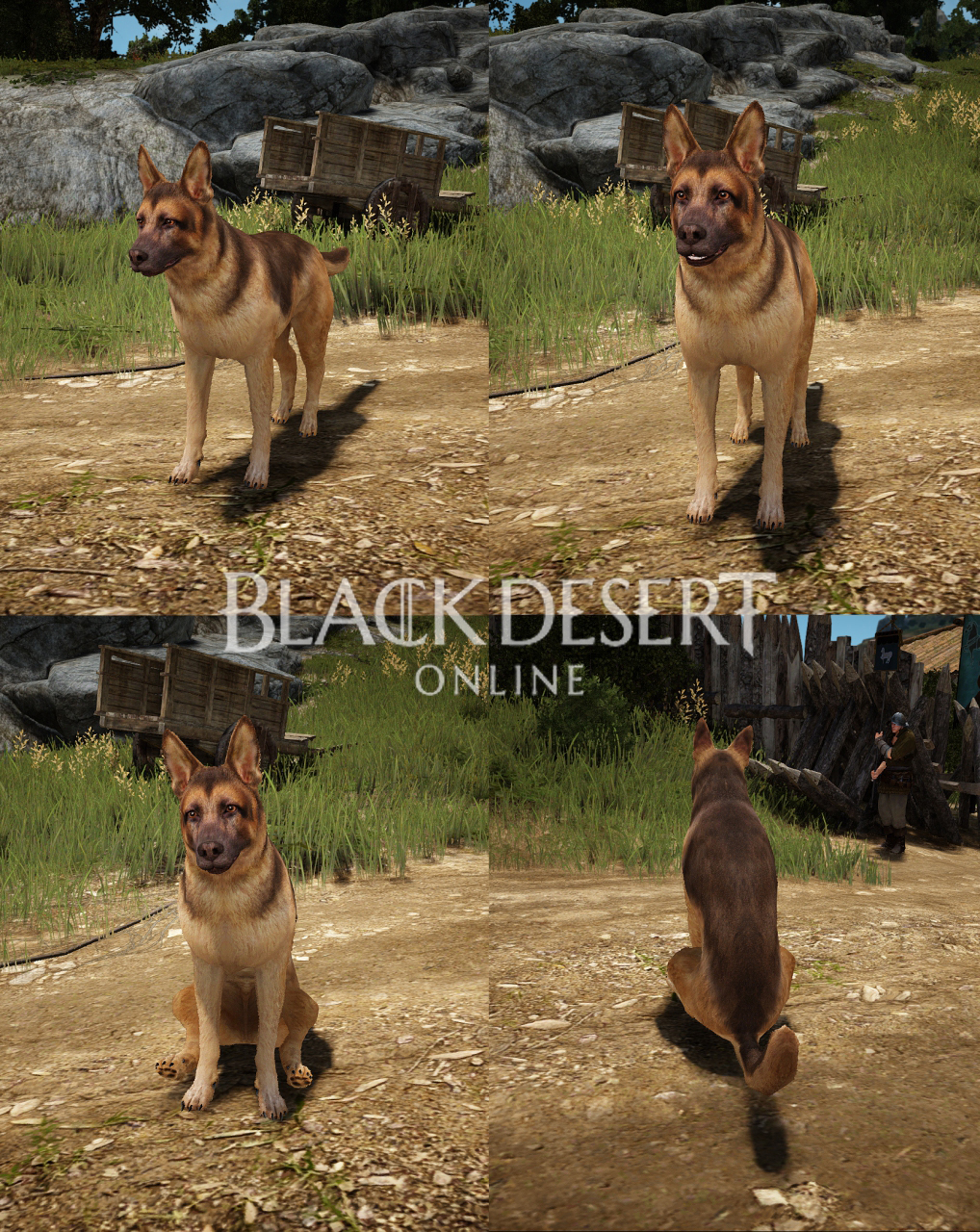 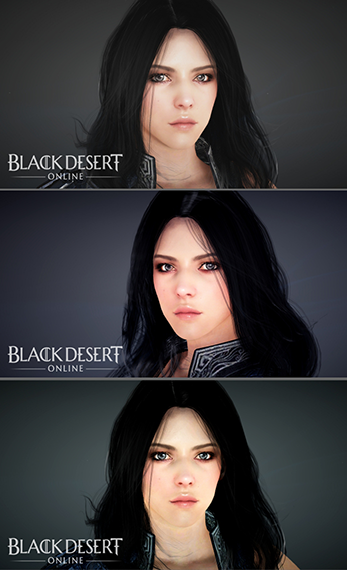 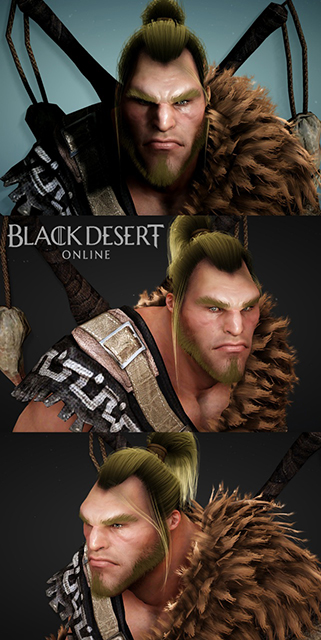 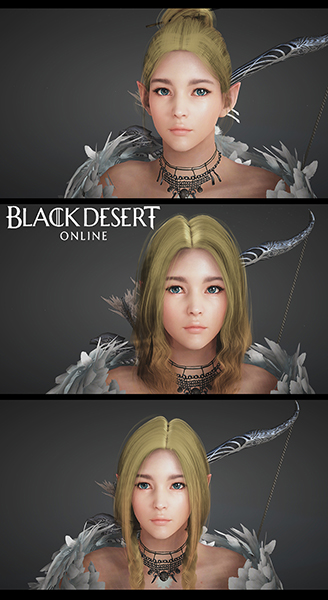 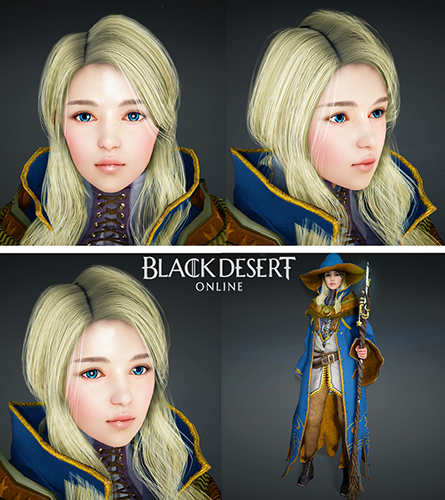 Thank you for taking the time to read through this. We hope you liked the insight provided about our current progress. We are still working on many things, so please bear with us. We will share more details about ongoing adjustments regarding the cash shop, pvp and other features, that you are eager to learn about.