Thurs, 4th February 2016 translated patch notes include new items along with 60 additional changes.
For details of this update, please see below for details.
Translated by BlackDesertFoundry.com

● A special event in the old costume was changed to always progress.

You can exchange your old clothes to <Shout to Augsburg> or <Crohn’s Stone>.

● February combat experience 200%! A hot-time event is in progress.

● The progress is one New Year is celebrated Mileage events.

– The duration of the event in-game store Pearl (F3)> tab mileage will be a [stand] and the grab-bag rice cake soup 1 miles!

Chance of good luck from the comfort features products can be purchased at a discount to the Costume Set!

– In rare treasure chest in a special event at ryurik Meet luck!

● Distance of the first chase III technology has been successfully modified.

● Flow: Using this technology craze associated technology has improved naturally after use.

● has been modified to apply the technology used in wind step increase defense effectiveness.

● has been modified to use a cooldown of Bon technology of wind.

● When seolbim battle after wearing costumes representing this attitude in some parts of the body unusual phenomenon has been fixed.

● Outer clothing worn during the hermit trainer can this abnormal phenomenon has been fixed.

● flow: PvP damage when the battered technology has been slightly reduced.

● characters to stop this phenomenon in a particular behavior has been modified after mounting the awakening weapons.

● level of arousal techniques embargo ditch when the phenomenon has been fixed up as a system message.

● description of the following items has been improved and intuitive.

● The following message has been modified World is not output when picked items.

● The item has been added to the room PC dealers selling.

● The following two new leap and knowledge has been added.

※ Look for the golden recipe for the creation of a new leap!

● Christmas decor furniture This phenomenon does not apply to this point bonus points have been fixed.

● The basic attributes of the following items has been increased.

● strengthen the ability of the following items have been added.

● When mounting the North Valle appearance of a fishing rod, fishing rod Dieppe Leah has changed.

● Damage of arousal techniques have been modified to be affected in the damage of main weapon and weapon awakening.

● The new item can be obtained from the Valencia region Part2 hunting has been added.

● In August when three horses acquired through the crossing only been modified to birth steed message appears.

● 5 three words have been changed so that you can acquire the skills to move to the low side of probability.

● 6 ~ 8 three words has been increased probability that can be learned lateral movement skills.

● The setting has been changed in terms of price movement skills in a village market.

● The new title has been added.

– There is no master / haul your lazy chairs WING / temple / I’m stronger than you.

– Being in lucid / predator / Lords of the Sulfur mine

– Hunting drinkers of the wind

– Yieoganeun a living by hunting

● Asset Management Office during iterations, the result is abnormal phenomenon occasionally appear in the warehouse has been modified.

● The top equipment in the equipment sub-phenomena that are not continuous repairs maximum durability repair has been fixed.

● If you try to quickly collect during successive sampling bottle fixes the aura symptoms and empty bottles items consumed twice.

– The one-second delay has been added to retry after collecting bottles.

● [Let’s Kill the tree spirits!] It has been an increase in the number of requests goal.

● [Combat Upgrades – get directions from Forio support request has been successfully modified.

● When trading masters level greater than 1, it is not possible to get a desert oasis belrap trading in the buff has been modified.

● ‘popular products of Carl lady peon’, ‘Many girls dream’, this phenomenon has been modified to “Alti Nova skin of the upper class ‘, cross the confirmation do not complete the request” parade of endless research’ action.

● has changed ‘top Xian voucher’ location ‘rehabilitation at the top of Xian’ request.

● The exchange has been added to the ESC menu.

● The use of detachable quick-slot approach has changed.

– You can move the Quick Detachable slot in the UI to edit mode, or set to use.

● it has been modified to show only the number of guild battle victory in the guild ranking.

● warehouse symptoms overlap a button UI processing and exchange has been corrected.

● A typographical errors have been corrected in the description of the outbuildings world map.

– Or DOWN / Italian / outbuilding of syandi

● party location icon on the minimap has been modified so that it is displayed in the top position when requested icons and overlap.

● About description of the adventurer in your life priority this phenomenon that appears in the unusual position has been fixed.

● The sound effects have been added when you click on the escape, exchanges, red battlefield, move channels from the ESC menu.

● My Information window intermittent challenges specific information in this phenomenon seems to have been fixed in abnormal.

● Some UI fixes the exchange items that are unusual phenomenon exposed in certain situations.

● Changed the icon image of a leap items.

– Leap items of the same effects are displayed in the same color, the color-coded depending on the effectiveness of each jump.

● When a character Durability Durability UI appears to decrease, a phenomenon that is also displayed in the UI durability of the other characters around have been corrected.

● workers has been modified to correctly display the entire list of the workers of the world map window command post during construction work.

● sort Guild energy / contribution in the guild status window has been fixed to work properly.

● The status window open exchange Pets Pets has been changed so that the eject button is disabled.

● This phenomenon has been shown to modify the contents of the dialog occasionally overlap.

● A description of some of the furniture item typos have been fixed in perl stores.

● This is a non-intermittent operation after finding the water boarding award phenomenon has been fixed.

● ESC – Game – has been modified so that you can set the camera-related shortcuts on the shortcut for input.

We  hope you have more fun in Black Desert!

You can obtain the item in each box of one chance in use.

※ sale items may vary from the images below, and are subject to change.
※ The costume may look different depending on whether you wear underwear, and other accessory items.
Perl is ※ buy the item may not be registered on the stock exchange in accordance with item properties.
◈ Event 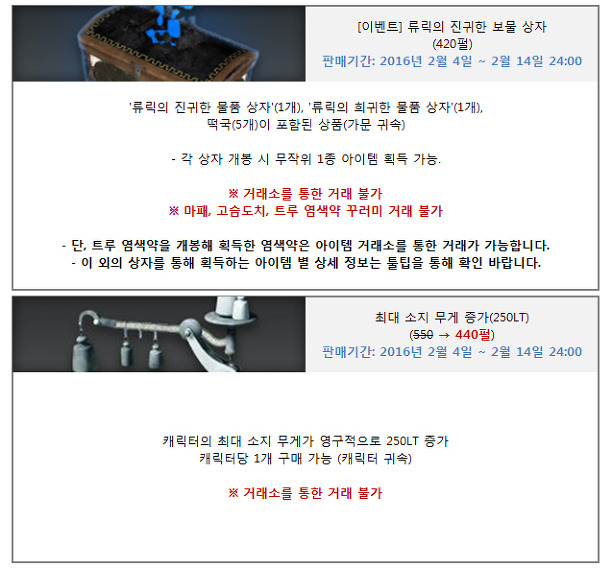 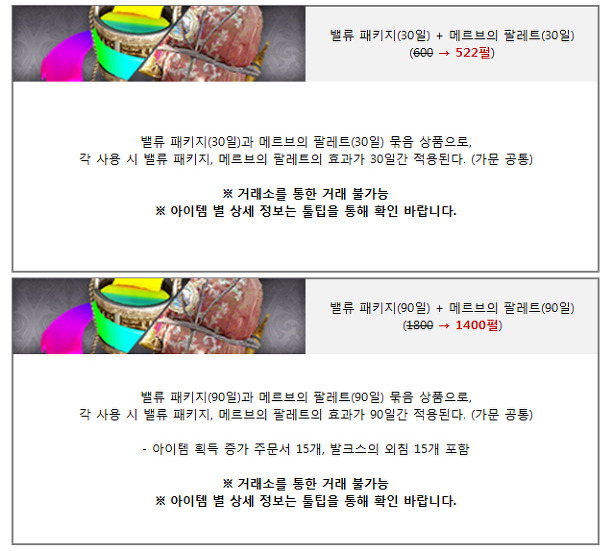