This skill is set to be activated as the Riding the Wind skill in this Black Desert Lab update, but it will be separated into a different skill in the next update.

To give the feeling of fighting with the spirits when using the skill, the Spirit Strike buff existed in the Call of Earth skill, but when hunting for a long time, continuously using the Call of Earth skill unnecessarily increased fatigue. For this reason, it has been improved to be activated at all times. In addition, the damage has been increased to make it feel more like the spirit is helping the battle.

The new Skill, Spirit’s Galaxy Skill, has a direction to be used as a quick link Skill through debuffs with high damage, and the defense check has been removed.

Striker’s reboot work has been carried out. First of all, in the case of awakening, in the big flow, we focused on controlling the stuffy part that seems to be cut off in the link between Skill and Skill. In addition, the cooldown time of the main skills was rather long, but we adjusted it to a form that can compensate for these shortcomings, adding to the taste of fighting.
Succession Striker was able to consistently inflict damage, but focused on improving the situation where stability was poor due to the lack of defense checks in skill linkage.

Also, please note that we are considering changes in various ways to improve the way pets attack.

The Striker also prepared a video just like the previous Warriors and Rangers.

The core skill of the Striker, Crouching Wolf and The attack speed increase effect of the Flow: prey hunting skill is a skill that has to be used continuously every 10 seconds. To solve this, the duration of the attack speed increase effect has been increased, so that the fragment of fighting spirit can be used not only for the crouching wolf and flow: prey hunting skills, but also for other uses.

The Bloody Fang skill has been reorganized into a skill that can further increase the utilization of the Striker’s fighting spirit fragment. The crit chance that was lacking has been raised through the Blood Fang skill, so that it can inflict higher damage depending on the skill linkage.

Compared to the previous all-lighting Skill, the Rising Wolf Fang Skill, which had low utility, has been reorganized so that it can quickly apply a floating status abnormality to target the opponent’s gap.

Due to the low utility of the Iron Fist Fury Skill, most Striker’s and adventurers used the Perfect Blow. Changed to now allow selection based on which skill to link next.

Explosive Blow Skill and Wolf Fang Skill have been improved to further increase usability during hunting. If you’re doing quick damage from a distance, you’ll be able to get a better effect, and Blast Blast will work better when you’re dealing damage to nearby enemies.

There was no major strength compared to the great wrath. The river: the great wrath Skill focused on reorganizing its utility. Due to the effect of the energy release and the movement speed reduction debuff effect, it will be used as a Skill with a difference from the Absolute:: Huge Wrath Skill.

The reason for the low stability of the Legendary Striker was that it had to activate the energy release effect without any defense rolls during skill linking. In order to improve these aspects, we have increased the stability by adding the forward guard effect to the skills linked from the Kang: Geumgang Skill:

Kang: The Arangpo-style Skill was designed to be a movement Skill and an attack Skill that inflicts damage. However, it was an ambiguous Skill that was difficult to use in any part. Therefore, unnecessary parts were removed and changed so that it can be used as a mobile device.

By making the combo of the traditional Striker more diverse, it has been improved so that it can be linked by mixing defense judgment Skill and Skill that can utilize energy release without defense judgment.

Land Buster was a flow skill from Depthfall, but it wasn’t very useful compared to its long cooldown. Accordingly, the effect of the existing ground breaking Skill has been changed to the basic effect of the abyss collapse Skill, and the Skill has been newly reorganized.
The changed Avatar’s Cry Skill is designed to be a Skill that can recover health and quickly recover a piece of fighting spirit if successful with the super armor effect after the abyss collapse Skill.

Flow: The move Skill was in the same position as the ground breaking Skill. Similarly, we changed the basic effect of the ax slash Skill and reorganized the Skill.
The dragon isometric skill is designed to inflict high damage on skill combos that start with the air attack float effect while maintaining super armor. After the vacuum recuperation Skill that is activated in the awakening state, you will be able to inflict powerful damage quickly with the ax slash Skill that follows in conjunction.

Flow: Bite Off Skill was mainly used as a Skill to restore health and maintain the front guard effect rather than damage. However, in this case, there are many disadvantages in terms of usability, so it has been reorganized to allow a more aggressive play by changing to a Skill in which the Striker directly charges and attacks.

Contrary to tradition, it was very difficult for Awakened Strikers to use Flash Step in succession. Due to the long cooldown of the Double Flash, to alleviate the part where the skill could not be used relatively freely, the skill of the new alert was changed to a passive skill and the cooldown was deleted.

The Fallout skill has been changed to a skill that allows you to frequently use the effects of the newly reorganized Bloodfang skill in the awakened state.

– The following items have been removed from the loot items that can be obtained by killing monsters in the above areas.

In the case of Calpheon and Mediah, there were too many items to be dropped. As a result, the bag was full even though it was not needed right away, causing inconvenience.

The loot in Valencia has been improved. New loot will now drop instead of old loot. In this case, Valencia is the place where you can mainly feel the growth with the start of the season and just got the Tuvala gear, whereas the loot balance is relatively low. Therefore, we have adjusted so that you can get more loot than before even if you hunt in the above area. Also, in this area, the drop probability has been adjusted to 100% so that new adventurers do not have a big difference in obtaining basic rubbish even if they do not use the ‘Item Acquisition Increase Scroll’.

The enhancement rate of Tuvala equipment and accessories has been changed. Actually, I had a lot of trouble with this part. In particular, if you summarize the opinions given by adventurers, there were parts that had a low probability, but there were opinions that it was difficult for the system with a lower level of reinforcement, the so-called ‘Jang Advertisement Square Light’. We thought about changing this method, but since this is Black Desert’s default enhancement system, we decided that changing the rules only for Tuvala could cause more confusion in the future.

Therefore, the current system is maintained, but the basic enhancement probability is set relatively high. (Intermediate difficulty between Naru and Tuvala equipment in the previous season) And the difficult part in the lowering of the enhancement stage is the ‘DUO(II)-TRI(III)’ section, so PRI (I)-DUO(II)-TRI (III) The basic probability of enhancement for the stage has been greatly increased. In the case of TET (IV) and TET (IV), we have changed so that 35% can be maintained according to the 40/60 stack that Fugar gives when you succeed in TRI (III) and TET (IV).

Lastly, please note that this information released today may be changed according to your opinions when it is introduced to the official server in the future.

※ The balance of ‘loot’ in this update has not yet been reflected in the Black Desert Research Lab. Please note that this change will be introduced directly to the official server.

Elvia has changed the rest of the region, with the exception of the already popular Orc Camp and Blood Monastery. First of all, in the case of Biraghi Den, Altar Imp Habitat, Abandoned Castle Site, Swamp Naga, and Swamp Fogan, we lowered the threshold slightly so that adventurers with 240-270 attack power can take on the challenge, and the loot has also been adjusted to match the lowered state. As a result, adventurers who have exceeded the recommended attack power can get a little more loot compared to the previous ones.

In detail, first of all, in the case of Biragi Den, the bounty system, which is a gimmick element, has been changed to a method that is assigned to individuals rather than competition, and in the case of the Altar Imp, the re-appearance time of basic monsters has been reduced to make more use of the gimmick. In the case of the Blood Monastery and the Red Orc, in addition to the so-called ‘good spot’, additional monsters were placed in the rest of the area to make use of the hunting grounds more widely.

And although it was not included this time, in the case of the ruins of the castle, the gimmick element is being improved in a form that can be used outside the castle rather than inside the castle. The abandoned castle site will be updated in September.

※ Please note that the details related to Node Wars/Conquest Wars added below will also be updated on the official server today (September 10).

※ If the mount bag view is canceled through this function, the mount bag will not open together even if there is a mount nearby when using the warehouse. 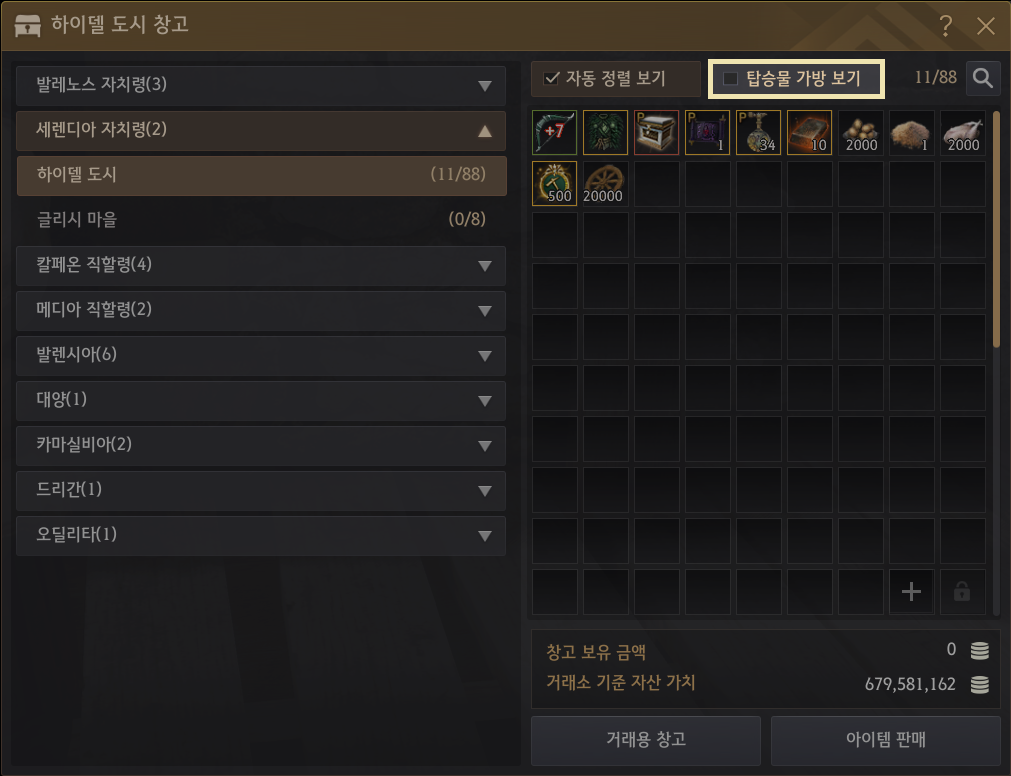 When interacting with the warehouse keeper in town, you always had to turn off the mount bag with ESC to move items to the warehouse if there are mounts nearby. You can now choose whether to view the vehicle bag together even if there is a vehicle nearby through the Vehicle Bag View setting. Even if you occasionally want to view the mount bag, simply check the mount bag view setting and it will appear immediately, so please use it conveniently.