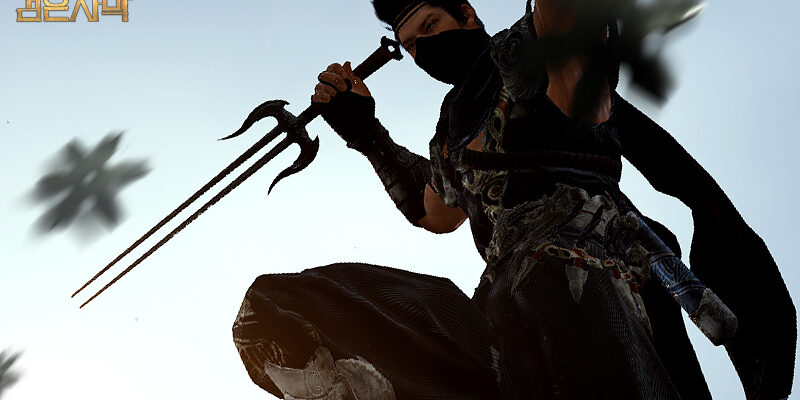 Thursday, 17th September 2015 patch notes included a new ninja class, along with 62 additional changes.
For details of this update, refer to the information below.

● 3 Events are currently taking place to celebrate the release of Ninja.

● New Event item has been added.

※ [Event] black claws items Jinn Thurs September 17th for a limited time and can be purchased in the store using the silver from the event end date is expected to be announced later.

● New ninja character has been added.

– The sword and chesul, charming character to take advantage of the excellent maneuverability and a variety of crowd control techniques as an assassin-type character to use ninjutsu.

– You can select one of the Shuriken to complement the recognition and defense as a secondary weapon to maximize the damage.

● boarding in no circumstances be attacked has been fixed so that the water can be targeted.

● The character in the character selection window has been changed to non-helmet wearing plain pitched for battle.

● When the cause intermittent damage during emergency avoidance state of emergency avoid entering this phenomenon that has been fixed state is released.

● combat operations three times during the operation of motion view has been modified to customize the symptoms that are applied to the previous technology operations.

● Playing: avoid striking roots to move to the right technique and the technology used is fierce attack skills when using this phenomenon has been modified to be used

● The stun effect levels increase when he shot to the other characters have been deleted.

● heukrang this phenomenon does not disappear even after the holding time after the summons has been fixed.

● The local upmarket goods merchants have been added to the list of items under selling.

● ‘Crohn’s seat, to prevent the numerical decline of failure potential breakthrough has been added.

– Chapter (+16) breakthrough potential failure of the item or later, you can prevent the decline in the numbers of failed items.

– The number of seats Crohn’s necessary, depending on the current market price of the item is different.

– Crohn seat required quantity is about 50% of the current market price of an item to try the potential to break through.

– Only Crohn’s can be purchased for 100 seats per each village in silver armor trader.

● The items described in the Advanced barley seeds has been fixed correctly.

● has been modified so that each character can be heated by Carl peon aristocratic costume from a costume exchange voucher.

● has been changed so that you can register your costume voucher to exchange the item.

● Do not register the price of the camel market has changed.

– The camel base price and price per level has been set.

● end of the base price and the price per level has changed.

● pilgrims to the sanctuary – has been modified dig people of modest stronghold stronghold Button Manager Tariq.

● Epee Ria -> Alti Nova -> Caddo not a phenomenon that the delay in the shuttle cargo to and from the Inner Harbor has been fixed.

● NPC steal Arendal is an unusual phenomenon in the motion was modified.

● knowledge of mutan image is registered.

● Guild House and the daily production limit of production, production prototype has been reduced for some time.

● The cost of trade goods to produce a Guild production was rising.

● end of the price of technology has changed.

● The necessary costs for the completion of workers immediately upgrade has been reduced.

● The need for a complete fabrication cost is reduced immediately.

● The response time to pick up every item have been increased.

● Find camels during a camel ride at the stables has been modified after this phenomenon happens momentarily.

● knowledge of some NPC has been corrected image are different phenomena and physical appearance.

● Valencia has been added to a new picking request belrap oasis.

● knowledge of fish image has been added.

● it has been modified so that it extends to the contents intact Guild Ranking tooltip created by the Guild Introduction UI.

● The new line features when creating a guild introduction has been modified to operate.

● Added a reset button next to the Guild Introduction Register button.

● vitality elephant, mouse-over tooltip description when the life bar has been added exposure on board.

● life to elephant stables Guild Information UI, has been added during mouse-over tooltip description on life.

● The laborers Management Window View across town by a filter function has been modified to work properly.

● subsidies, harp, this phenomenon can not press the button intermittently payment has been fixed.

● Before the occupation, the message of the base have been added before proceeding to appear character also connected underway.

● In case of defeat at the base before the message out, “we lose.” The phrase has been deleted.

● batch, has been modified to also search Enter to search in Setup mode.

Guild Notice intermittent phenomenon is not corrected ● has been fixed.

● If you own the Guild House Guild House in the World Map it has been modified to produce the quantities produced icons that marked today.

● [workers] upgrade the system message has been changed.

– Upgrade the sentence is impossible to move the channel was removed during the test.

● Guild Captain period of time when not connected to the Commanding Officer Guild Guild delegation button invisible phenomenon has been modified.

● attached to a pearl jewelry shops costume has been added to allow extraction through the Blacksmith NPC.

● About the character information window has been added functions.

You can enter 6 lines of up to 120 characters long.

● The guild is an adventurer registered About the recruitment function has been added to the list About the exposure as a tooltip.

● Guild was being occupied base add the ability to pay the subsidy.

● occupation before / during the Citadel repair base for the% recovery of the former have been slightly downward.

● former occupation / base around the fort and the command post can not blow this one phenomenon in progress has been modified.

● has been changed so that it can not be seen even when the effect the effect of some arrows set off the option of a different character.

– Former occupation / base case appears before the effects of all arrows.

– Former occupation / base if not before PvP, the guild ever, only the effect of a friendly guild arrow is displayed.

● If you get shot while moving the UI is an open channel that this phenomenon does not disappear UI have been fixed.

● pitching dyeing Window On / Off button has been added.

● The pre-occupation coverage area icon on the mini-map has been deleted.

● character to life and technical resources (spirit / divine power, etc.) the resurrection after death has been modified to revive the town with a 100% condition.