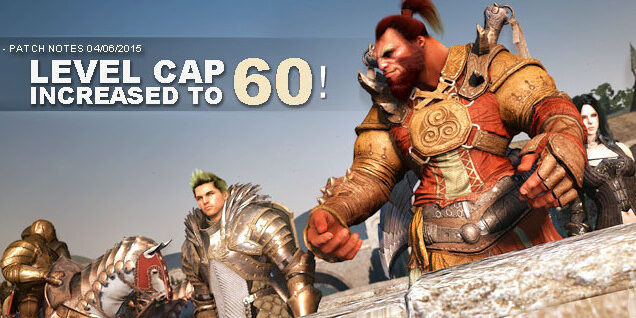 This patch update was approximately 485MB and included a level cap increase along with 125 additional changes.

– The costume extraction feature has been added to the Blacksmith and Armor Merchant during this time.

– Shout to Hidel City item will not be translated and will appear as  발크스의 외침 in-game. 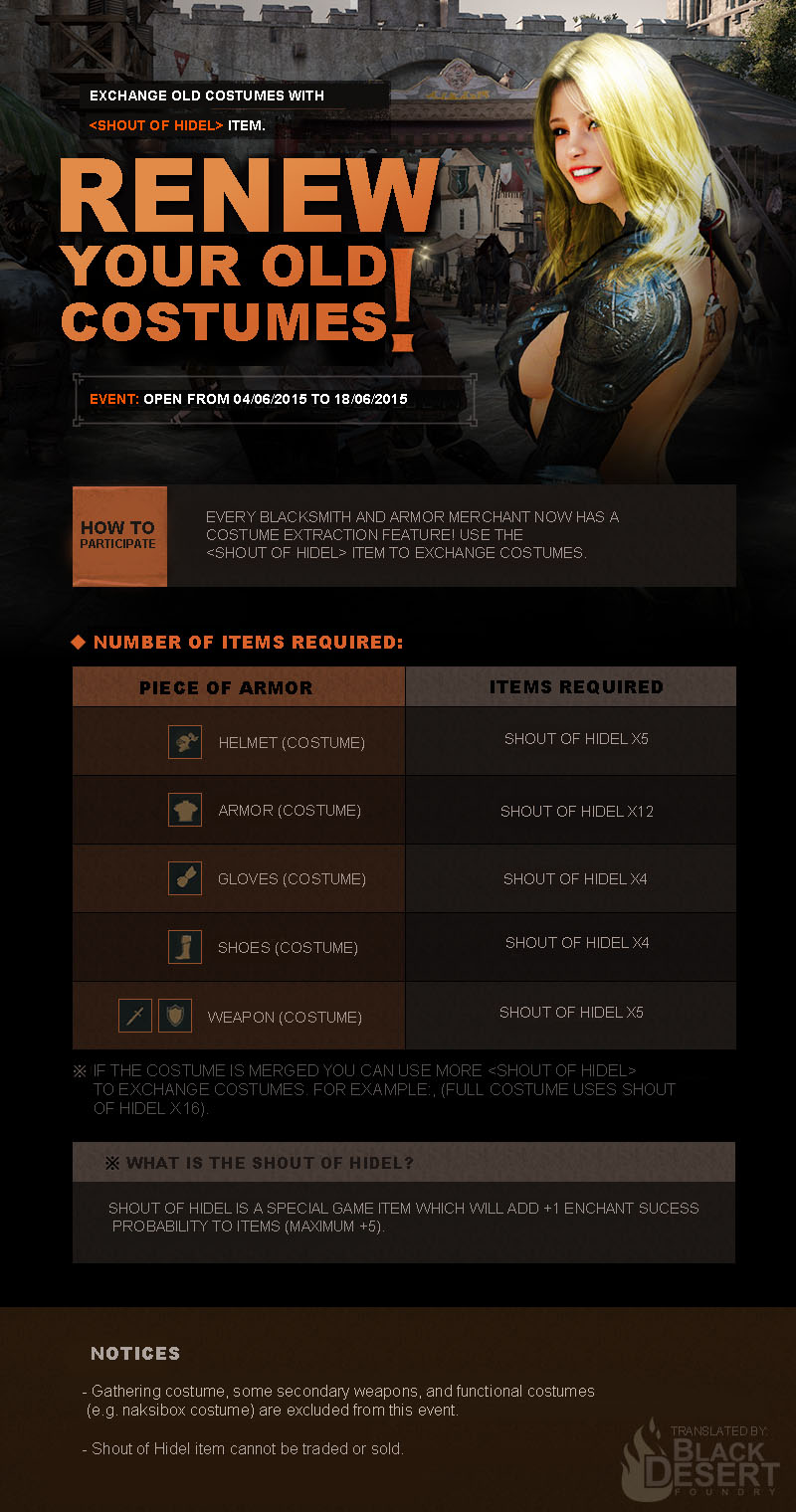 ● The experience required to level up after 55 has been reduced.

● A bug causing an awkward looking posture when switching between stances has been fixed.

● Crawling will no longer cause the character to change to non-combat stance.

● Rolling with a trade pack has been adjusted to look more natural.

● Horse behavior has been adjusted

– Holding the Shift key whilst mounting the horse has been fixed

● The animation for in-air combat have been adjusted so that the character now has a lower posture as they land.

● Error has been fixed where the Counterattack readiness skill cool-down was not working correctly.

● Shield skills have been adjusted

● Running speed, when out of combat, has been increased.

● Offset effect has been added to the offset resistance for some time..

● An error with the Swipe skill has been fixed which was causing damage to not be applied during PvP.

● An unusual error with the Defense skill has been fixed which was causing damage to still be applied even when the skill was blocked.

● Description error with the Bow Proficiency I skill has been fixed.

– Can be used with Shift + left-click.

● Bug has been fixed with the Breath of Air skill which was causing no mentality to be consumed.

– Has been modified from four to five.

● Bug has been fixed causing spirit to not regenerate when on a horse and in non-combat stance.

● Bottom Next II skill has been modified so that the effect is applied as you use the skill instead of after a period of time.

● Bug has been fixed where the player would receive damage when an allied buff skill was used on them.

● A hit delay with the Wizard/Witch class: Thunderbolt strike skill has been fixed.

● Bug has been fixed where the player would receive damage when an allied buff skill was used on them.

● The amount of Black Spirit energy consumed when running on board of the pet have been reduced by 30% compared to existing levels.

● The amount of Black Spirit energy consumed when jumping on board of the pet have been halved.

● Stun and knockdown resistance has been doubled from the original whilst on board of the pet.

● Summoning of the Black Wolf VIII ~ XI skill cool-down has been reduced from 300 seconds to 260 seconds.

●  An error with a disconnect between the keyboard shortcuts window, next stop, the skill the next skill: skill‘s behavior is too fast has been fixed.

● Defense posture on the other side of the city another shot to the skill does not ease-of-use.

● Spear of light I, II, III, video has been fixed.

● Shield cast I hit 30% chance to crit isfixed to occur.

●  Shield cast a blow to the city, 60%probability II detrimental has been modified to occur.

● A bug involving Flow: maximum number of hit of a rotating shield 6 does not apply until the strike has been fixed.

● Flying kicks I, II in other behavior has been modified so that it can cancelled.

● All state over the time resistance of subparagraph (a) keeping of Eli language was modified to increase.

● An error with a disconnect between the keyboard shortcuts window, next stop, the skill the next skill: skill‘s behavior is too fast has been fixed.

● Error has been fixed which made the weapon disappear when changing between combat and non-combat stance.

● An error causing the hands to look abnormal when using gathering tools has been fixed.

● A bug has been fixed which was causing weapons to be invisible after gathering.

● When using skill on a horse, the correct amount of mana consumption will now be applied.

● Thunderbolt technology description has been modified.

● The name of the pole: blizzard polar skill has been corrected to snowstorm.

● Casting speed increase has been added to skill awakening.

● A bug has been fixed causing  Pole: Blizzard skill to consume an abnormal amount of mana.

● The speed of the Magic of the Heart skill has been  increased by 20%.

● The speed of the Magic of Lighthouse skill has been increased by 20%.

● The cool-down of the Magic of Lighthouse skill has been changed from 30 seconds to 20 seconds.

● Magic of Lighthouse skill frequently gather around the enemy has been increased.

● Magic of Lighthouse skill has been modified so that it locks into position.

● The cool-down of the  Magic of Lighthouse skill has been reduced from 40 seconds to 5 seconds per level.

● Residual lightning damage has been increased up to 280% from 97% per level.

● Fireball explosion damage has been increased up to 413% from 73% per level.

● Anger of the black spirit technology has changed a front guard feature on super armor.

● The MP consumption of  freezing skill has been increased from 50 to 250.

● Snowstorm skill MP consumption has been reduced from 210 to 150.

● Teleportation skill has been modified so that the character is invulnerable while casting.

● The cool-down of the Magic Arrows skill has been reduced from 13 to 11 seconds.

● The cool-down of the Sage: Philosopher’s Memory skill has been reduced from 5 minutes to 3 minutes and 30 seconds.

● Animations have been changed whilst on a horse so that parts will no longer abnormal stick out.

● Lightning Chain can now be cancelled while on horse-back.

● The duration of snowstorm been reduced by 50% while on horse-back.

● The correct amount of mana will now be consumed while using Lighting Storm skill on horse-back.

● Description has been added to trap items.

– You can install up to three.

● Play accumulated 3000 hours Challenges (account) has been added to the rewards challenges with the prize as one [Event] glasses box.

● A bug has been fixed where the Wizard’s Cane weapon could not be bought in-store.

● A bug has been fixed where the Wizard’s Cane weapon could not recover maximum durability.

● The quantity of materials needed for making oils have been reduced.

● The effect of some Elixirs has been increased.

– The effective duration is the same as the original.

● Cool-down time of Elixirs has been adjusted.

– Elixirs of the same type share a cool-down, but other types can be used simultaneously.

● Store Sales prices of the following items have been changed.

● Clear liquids: medicine and pure powdered reagents needed for the production, the number of weeds has been reduced.

● The number of materials required for the production of blood flow has been reduced.

● Alchemy and cooking results are now shown depending on your level.

– Results that may be obtained from the schedule of the higher level or above has been increased.

● Alchemy, the probability of success when you get to the food by-products has been increased slightly.

● Processing level can achieve higher output of the processing methods, such as higher the chance.

● Carriage equipment can now be dyed.

● Karl Stein NPC adds a special atmosphere on the behavior of the costume set.

● Chances to get glowing powder has been increased.

● Drop items list of mutant mutant treewood has been added to the nucleus of the Jinn.

● [Worker education–called] the goal of the existing number of commissioned 3/3/3 (wilderness/monument/rock bone RAM) has been changed to 1/1/1.

● Chemistry plan commissioned by the recommendation of the Chief Lords of the reward.

● it has been modified so that the goods registration window Registered keep goods sold through the stock exchange NPC.

● If the price of the item when the item sold through the store is more than 500,000 silver NPC has been added to the message that money remittance to appear to the warehouse.

● If you are not a premium room or a PC would have received 500 000 Value package when selling gold than silver items from the warehouse to exchange the item has been modified so that the money transfer.

●  Item Exchange character has been modified to work properly in the search filter.

● Modify the socket information in the item tool tips have been corrected and exchange information will not overlap.

● New items have been added to the production notes.

● The item has been added to require the knowledge and knowledge acquisition method of making notes.

● Ship docks have been fixed:

● Cool-down icons have been added to Guild skills.

● When you recover maximum durability in the memory of all those craftsmen who consume items after the symptoms that can be pressed on the Enable button has been fixed.

● The queued items registered on the Exchange does not appear at the top of the screen.

● Accessories surpassed figures show the most potential, light, high, and oil, this error does not appear as such has been fixed.

● When you leave the ship, found in the dock, select the first ship that has been modified so the buttons and scene of the ship.

● Resolution options have been fixed that did not meet the position of some UI changes.

● Has been changed so that you can cancel the immediate mass production.

● Wizard/Witch class has been modified so that they no longer stick out while boarding a horse in combat stance.

● An error has been fixed where items would register without the full price being confirmed.

● Character shot: 50 percent of black anger of the Jinn is incremented by one, and the monster blood to increase unconditional 2 every other city has been fixed.

● Barricades have been fixed before the occupation / base if you are around and not, so that you can turn to attack PvP mode.

●  In the State applied in damage not covered according to the character’s stats.

● Synchronization of the item sales information exchange has been improved.

● If you have reclaimed: the garden crops or installations not being able to recall the message has been modified to appear.

● In the Adjust menu of the prince local tax rate of 0% is an error that appears to have been corrected.

● Improve the worker function optimization and has been improved so that it can repeat more than twice at.

● If you press the Hide button of the character windows has been modified so that it can not be seen as a regular item windows.

● Bug has been fixed causing pets to look abnormal when placed in houses.

● Character customization has been fixed so that tattoos are now placed correctly.