Thursday 3rd September weekly maintenance included changes to mounts along with 69 additional changes.
For details of this update, refer to the information below. 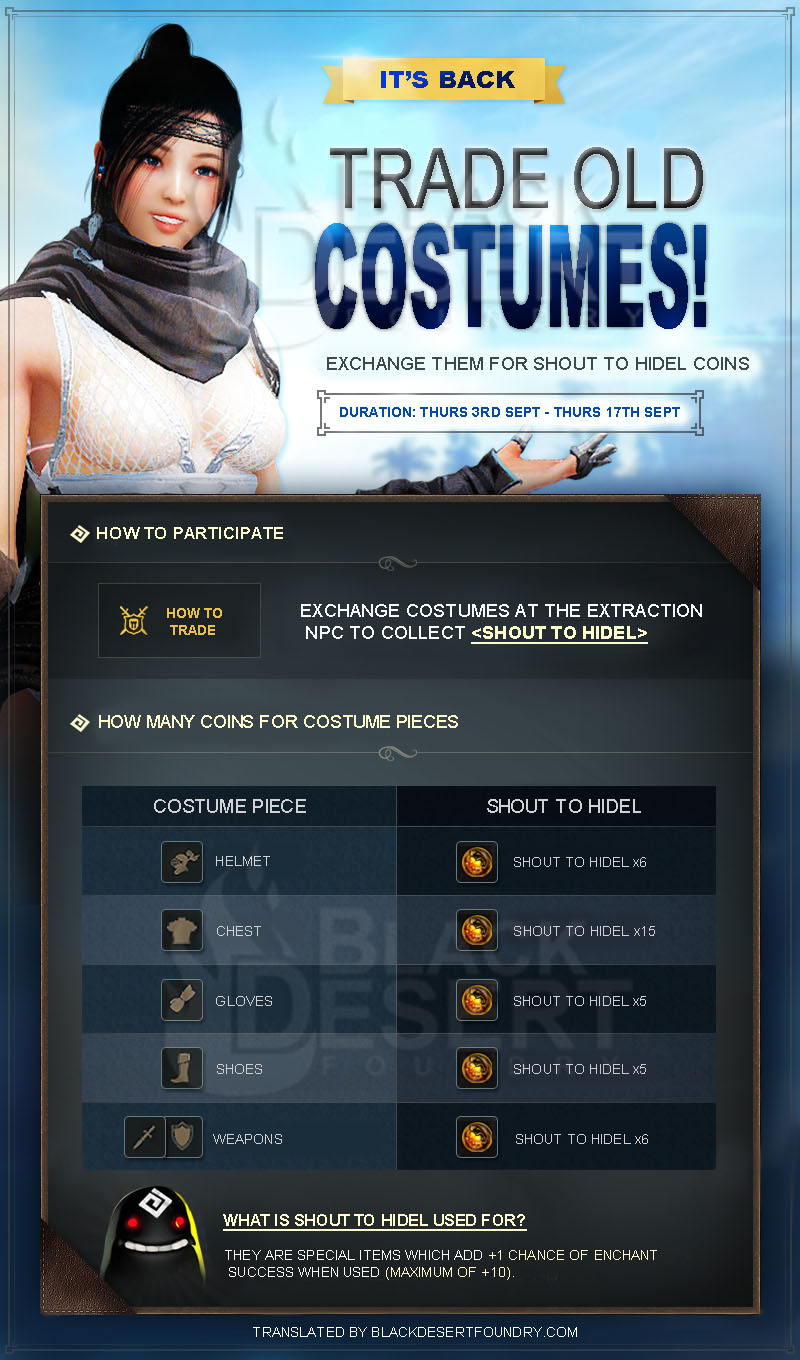 ● Jackpot box [Events] have been added to be able to acquire PC cafe coins.

● After using emergency avoidance has been modified to enter into combat stance.

● passive skills that can be learned from the 55-60 level has been added.

● When the effect is applied to the super armor stun effect of the use of technology applied this phenomenon is to be released Super Armor effect has been fixed.

● left and right using the move of the ‘F’ key has been modified to use the wind’s commitment technology.

● After another action, such as moving atmospheric behavior as the default screen when switching jittery been improved.

● A bug causing Alchemy elixirs to have strange effects  has been fixed.

● All jewelry items have been adjusted for exchange rates.

● The exchange can be registered per Unit of the following items have been adjusted from 100 to 500 pieces.

– The number of herbs

– The number of herbal tablets

● Some items have been increased performance.

● changed to the car of the car to drink this drink Rove Rove blessing blessing (15).

– The information that you can use for 15 days have been added to the item description.

● potential breakthrough + more than the damage to all weapons and +4, damage to the secondary weapon +3 or +3 Defense, the Defense +3 on armor effect has been added.

– Existing poultices and performance is the same, but there is a 2 second cooldown.

● Use a blessing and a bag 16 when inflated warehouse space expands the phenomenon of the car drink probe has been fixed.

● This beefy set of information about the effects on armor item tooltips have been added to the tree spirits.

● shops selling basic price of the following items have been changed.

● Set the following items of jewelery have been deleted.

● basic abilities in the following items has been changed.

● strengthen the effect of the following items has been changed.

● This result comes out when heating the following items have been changed.

● The new items have been added to the jewelery box in question.

Guardians of the Crescent Moon Ring

Belt of the Basilisk

Belt of the Centaur

The nucleus of ancient weapons

Guardian of the ancient tension

● The following items acquired during World message has been modified to appear.

– Proof of the Temple Guardian

● The new items in the secret store of Patrizia Geo added.

– Beefy armor of the tree spirits

– Belt of the Basilisk

– Belt of the Centaur

– Guardians of the Crescent Moon Ring

● When the sun is milmuyeok Traders work on the Valencia region and pops the sun was setting to work.

● The new excavation base has been added.

– Pilgrims to the sanctuary, modestly-dig

– Proof of the crescent

– Followers of an ancient civilization tension

● pilgrims to the sanctuary – you can activate the excavation base year energy consumption by 80 to Tariq in humility.

● workers new skills have been added.

– New technology has additional operations will be conducted during work once.

– Will be needed as a result the amount of material that can be created when the work and production.

– Mushroom packaging technology for example when the workers work once in a mushroom packing, consumes twice the total amount of material produce two results.

– Herbs Packaging Technology: Herbs box to add one during working

* One can not be undone.

* When more than one job to cancel the ongoing work other jobs.

* Haengdongryeok consumption is consumed only 1 dose.

● The angler fishing the delivery items have been added to the imperial family.

● elephants have been added to the auto shift function.

● elephants period features have been added to this release.

● aboard the command post and fort on elephant damage when hit has been reduced.

● When you call the camels in camel stables has been modified so that the sitting.

● After the camel ride is moved during endurance consumption has been reduced.

● aboard at the end of the command post and fort damage when hit has been reduced.

● emerged Broncos have been modified so that it extends until the end of the three second-generation 1-5 from 1 to the end.

● horses and camels are dead after the resurrection costs have been fixed.

※ Where jukdeun water boarding, unconditional life is zero you can find in any stall.

※ The number of deaths does not accumulate in dead condition.

※ If you die technology learning function it will be removed.

※ water boarding, unless it is the death of the general cost recovery will remain intact old.

● At the end of the death penalty for the following:

– The number of deaths per mating / probability is reduced when replacing.

● Buy a seat aboard the water imprinted effect has changed.

– Resurrection costs will apply to 1,000 silver.

– The horse skills will increase the probability.

● carriages and boats, when the elephant was resurrected fixed costs have been killed during destruction.

※ penalty of death and destruction

– Death (destruction) per life will be reduced by 2%. (There is no upper limit, it reaches the end of its life that water boarding is not available.)

● all water boarding penalty death and destruction are basically as follows:

※ Basically, the water board has died or is destroyed in the life and unconditional life-zero state is a state that can be found in any stall.

How have died ※, the item will be dropped unconditionally trade as well as some of the existing or destroyed.

Normal monsters: the number of deaths increased by 1

Summon monsters type: No increase in the number of deaths

: Death count is incremented by 1

<Others> player to die or unusual circumstances

: Any increase in the number of deaths

● Use the designated workers in the guild you can get Guild 10 activity.

● Add Item Exchange in accordance with the notification, the settings are recorded on individual computers.

● fort and the command post after the installation is completed, the entire occupation / base transition progress state has been adjusted so as not to cancel the construction.

● Improved knowledge to get a chance when the cotton picking cotton.

● has been modified so that you can get back to ahtosa congestion window is not upon the request of the ancient relics.

● When machining of the pension gyeonseupga box packaging is a royal pension phenomenon that gyeonseupga acquired knowledge of cooking box it has been fixed.

● ‘ahtuyi Cartan group of Ballack’s “continuous requests Bazar on sand has been added.

● has been modified to ‘Valencia seconds’ Shaka knowledge in the subject of the lungs to ferry Al Hallam waters.

● Valencia collected some guild activity levels had been adjusted to acquire an unusually through a referral.

● PvP mode button, if you handle anger behind the black button on the ordinance on the UI editing mode by reconnecting this phenomenon also has been modified again.

● A message has been purchased for the item that failed to duplicate this phenomenon in exchange modification.

● phenomenon during initialization dialog size from the UI editing mode does not apply has been fixed.

● The design of the end of the game character breaks the window buttons have been changed.

● Guild UI has been reorganized.

– Guild Information page, you can see the guild information.

– Word of the Guild Introduction and today is expected to be further supported.

● The default setting is to have several items when purchasing a minimum of overlap (1).

● exchange purchased items have been added to the window, min / max button is displayed.

● This function can be ON / OFF in game options have been added to the black spirits notification widget that is displayed when there is a request to get a black spirits.

● World Map Village / grade filters have been applied to the laborers Management window.

● exchange the item registration notification feature has been added.

– Alarm management can be done through the exchange item button at the bottom of the screen.

Technology Filter words have been added to the town market ●.

● This is not a phenomenon bag item shortcuts after you open and close your window open, choose Store NPC has been fixed.

● When grown in proportion to the growing levels of energy consumption it has been modified to not have a chance.

● Use of giant items such as poultices on the state take over by itself when the stun gauge as this unusual phenomenon has been fixed.

● A message appears when the characters have installed the fort and the command post to leave the guild has been improved and intuitive.

● Get the phenomenon desert statue is not targeting when normal atmospheric conditions have been corrected.